Megapixel was, far and away, the number #1 cited benefit in going to IP cameras / video. We asked over 100 integrators to name the "3 biggest reasons" they found, allowing them to name whatever they wanted. Over and over, the top one entered was megapixel.

Here's how the answers roughly broke down: 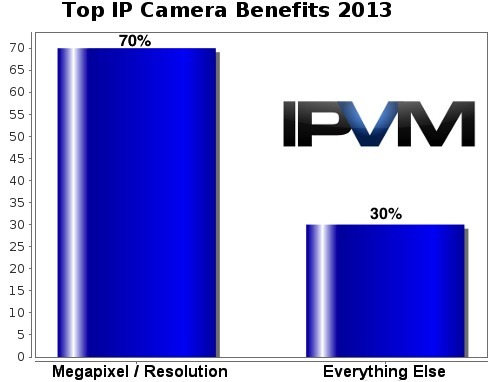 Here's what they had to say about megapixel and resolution:

Everything else cited was scattered with a dozen different choices but no close nor consensus second choice. Other reasons cited included: panoramic cameras, wireless, breadth of product selection, remote viewing / management, edge based recording, and PoE.

This confirms what is obvious to most in the industry, megapixel has been the 'killer app' and most critical driver in the shift from analog to IP.

On the negative side, this underscores how dangerous manufacturer megapixel misrepresentation is as it plays into the biggest potential benefit. For instance, Arecont's ad and Avigilon's ongoing misleading marketing campaigns (though in fairness, Arecont has turned itself around, Avigilon continues). On the other hand, it underscores how powerful megapixel marketing is.

Hi, Maybe it's time to have a re-examination of the mega pixel cameras that is actually utilized out there? As we know, "Axis has declared the MP race for over" Well: is it?

I think the actual use of Megapixel cameras will determine the need for higher megapixel values. For the majority of users (in store / hallway / at entrances) we may have enough resolution. To determine identity at 100+ yards, maybe not. There will undoubtably be applications that use higher values of megapixels. I don't believe these applications will drive the market volume however.

If a manufacturer could figure out how to truthfully and understandably market a high quality imager, this whole discussion would be turned on it's head once again. Not to name names, but I've seen high quality 3MP cameras that blow away a lower quality, but still tier one manufacturer, 5MP camera in an image shoot out. Both cameras were competitively priced, installed properly,standard availability and distribution, etc. The image quality was shockingly different.

Also, let's not forget that application is everything. I've seen LPR at 100 yards using a 4CIF camera. It was a good camera, and a great lens. It's hard, but doable. Can you do the wiz bang panorama and virtual PTZ at 4CIF? No. Can you accomplish 75% of what you need to do? Probably.

Bandwdth will always be the challenge in the MP game. I've been in the municipal surveillance world for several years. Putting 5MP cameras in a building is (relatively) easy. How about puttling up 500 of them across a city with no fiber infrastructure? You can put up a private wireless network, which will cost millions, or you can put in fiber, which will cost a whole lot more. The major cellular carriers have been selling the dream that they will be able to solve everyone's bandwidth problems, but with current technology, they are either lying or smoking crack. Maybe both.