Access control can be used for more than just securing buildings. Among these powerful 'other' functions is mustering, which immediately accounts who is where in a building. However, a system has to be designed properly and carefully to use this. In this note, we look at mustering, and what it takes to implement in a typical system.

First, one must select / differentiate between the two types of mustering, depending on how much adminstrative oversight is required:

Area tracking: The concept of mustering uses access control to generate a roster of occupants in a certain area. Every time an occupant scans a card to enter and leave an area, the access system logs the time, date, and credential holder of the credential. This data can be used to determine who is in the area at any given time, including emergency situations.

Checking In: Alternatively, mustering can be implemented in some systems as a 'opt-in' control, where a credential reader located at an evacuation point is scanned as cardholders reach that location. Then that list of names can be compared against the assigned list of evacuees who should scan into that reader during emergency. The report screen below is an example output screen from a 'mustering reader': 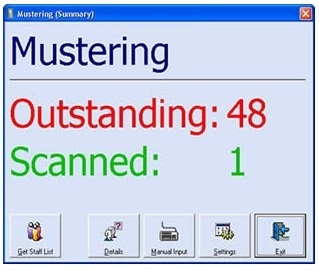 In either use case, the goal of mustering is to account for specific individuals, so if they are not confirmed present within an area, then additional action can be taken to investigate where they are. In an emergency situation, the resources to search for the unaccounted are limited, and having an accurate list of who is present helps bring focus to those efforts.

Where Is Mustering Used?

Aside from 'Emergency Roll Calls', mustering functions can be applied in several ways. In industrial or mining facilities, mustering can be used for 'Lock Out/ Tag Out' situations, where machinery should not be restarted or an area reoccupied until all maintenance personnel are accounted for. If even one maintenance person has scanned in to an area, but not yet scanned out, all machines are de-energized until everyone can be accounted for.

Likewise, in facilities where frequent headcounts are important, like prisons, daycares, or passenger manifests, mustering can be configured to ensure that all members of a group are present in an electronically logged system.

Depending on how mustering is implemented, it can send notifications or print reports to predefined locations. Not only can 'absentee reports' be sent to nearby printers within an evacuation area, it can send emails or text messages to current occupants alerting them to emergencies (ie: severe storms, bomb threats, or other emergency circumstances).

Depending on how a system implements mustering, additional software configuration and hardware may be required. If 'mustering readers' are used, then configuring this function may be no more than selecting a few checkboxes. This configuration often requires cross referencing other readers in the system to confirm occupants are not elsewhere in the system, or may even cross-reference shift or vacation schedules to confirm occupants are gone. 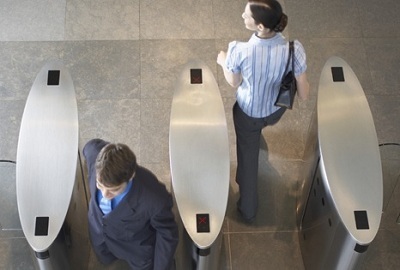 However, other forms of mustering may require additional readers. In order to take an accurate inventory of who is present in an area, occupants must 'scan out' when they leave. Most access controlled openings simply require 'scanning in' for access, so the addition of an out reader, even when hardware is not linked to it, adds cost and complexity to a system.

Implementation of the feature varies by access control software, but is typically supported by enterprise level offerings. For example:

If mustering is important to you, make sure to check carefully check how it is implemented in your access control software as approaches and availability vary greatly.

Paxton Access Control Company Profile on Dec 07, 2015
This note profiles access company Paxton, our 3rd installment in an ongoing...
Avigilon Access Control Tested on Jun 22, 2015
Avigilon aims to deliver an end-to-end solution of video surveillance and...
The Coolest New Access Control Product In Years is from Tyco on Oct 22, 2014
Cool. Access control. Tyco. 3 things that you or I may have never...
Comments (10) : Subscribers only. Login. or Join.