Breaking a drought of new product releases, Mobotix has announced the FlexMount S14 series [link no longer available]. The new model departs from traditional IP form factor conventions and claims to satisfy unique deployment applications. In this note, we examine this new release and compare it to similar offerings.

The most distinguishing attribute of the S14 are the dual detached 'Lens Units' connected via USB cable to the 'Network Connector' unit to compose a camera. See below for an image of the S14D with two installed imagers: 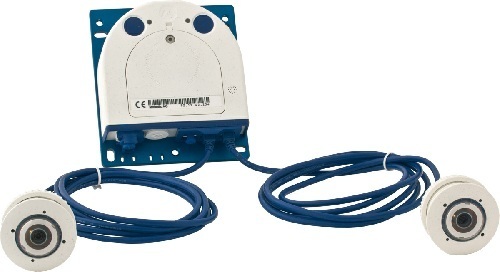 The camera is available in two standard builds: the S14M (MonoMount) and S14D (Dual Flex Mount). The MonoMount is designed with a single lens unit fixed into the Unit Connector housing, while the Dual Flex Mount features the detached lens units shown above. The S14D Flexmount features are described below:

The flexible orientation of the lens units facilitates either full 360 from a single image unit or split view, dual panoramic 180. The image below depicts both modes:

Smaller Size: The lens units, by themselves, are extremely small for IP camera standards, less than half the diameter of even the smallest minidomes (2" vs 4"). For example, the lens units of the S14 can be discretely mounted in interior trim panels in public transit, low-profile ceilings for hemispheric surveillance of art galleries, and various covert applications.

Flexible Mounting: The small size and lightweight of the lens unit can be installed many different ways. Even the smallest domes protrude into space, whereas the profile of the S14's detached 'connector' unit means that a shallow 2" deep surface will support flush camera installation. However, the unit's cabling and 'network connector' component must still be hidden from view behind walls or panels. While the form factor is non-standard, we can see several potential issues with deployment. The maximum lens distance allowed by the mini-USB terminated proprietary cabling is 6 feet from the 'network connector' unit. Proper alignment of the imagers requires precise measurements and using non-standard mounting methods. In order to lessen the effort, Mobotix has announced several mounting accessories for the series, including a 15 degree wallmount plate, a compression-type ceiling mount, and a dual imager blister mount.

Dual Lenses: The camera has the unique ability to observe two different areas simultaneously. In addition to supporting 'hemispheric' 360 images, the lenses can be mounted front/back or altogether independent from each other. A single unit can be divided into separate rooms, although the 12' combined distance limitation could limit camera position.

Mobotix 3rd Party Limitations: Like other Mobotix cameras, the S14 is best used with Mobotix's own VMS solution. For 3rd party systems, unless Mobotix's proprietary codec (MxPEG) is supported, frame rate is only a low 4fps at 3MP. Mobotix has limited 3rd party VMS support overall and especially for its MxPEG codec.

High Cost: Mobotix's S14 is more expensive than IP minidomes. While it supports a slightly higher resolution than 1080p models, the Mobotix unit is much higher than comparable models. For example, the 3 MP Sony SNC-DH220T can be purchased online for $670, notably less than the least expensive S14 model. Small form factor minidomes like the Vivotek FD8136 and Axis M3004/5 are a fraction of the cost (at under $400 even for the Axis 1080p version). Compared to these competitors, the biggest benefit is the S14's smaller diameter (2" vs 4"+) that can be a key deciding factor for users with demanding aesthetic and camera concealment requirements.

[UPDATE: Axis has released a very similar offering. See our review and comparison to the Axis P12.]

Mobotix has released a detailed technical marketing video that is worth watching for further details: