Megapixel Man of the Year

A brilliant marketing move or a bizarre waste of time? One manufacturer is sponsoring the 'Megapixel Man of the Year [link no longer available]' award, causing a small commotion this week. The award's on-line voting allows the community to select between two finalists, salesmen at Arecont and IQinVision.

The award is billed as "the most sought after prize in all of IP Surveillance," emphasizing that "The road is long and journey treacherous but for the chosen it is a chance to breathe the rarefied air of the highest resolution."

kind of brilliant? that is setting the bar awfully low, aint it?

While I am all for being different, and dreaming up attention-grabbing stunts before big shows, this badly-written parody falls flat (for me at least).

This 'contest' sounds like it was dreamed up, the URL was purchased, and the entire comedic content was written - all in about an hour (if that long).

I think it had potential, but the content and delivery was very weak....

IPVM | 04/05/13 02:54pm
Well it's become obvious who here doesn't believe in giving dreams to needy kids, or helping them do better in school. I bet you don't want a bright future in this otherwise dark world, either!
Reply

Marty, put it this way. You are the marketing manager for Vunetrix. Tell me how you would get them publicity. Compare to what they have done here.

I decline the invitation.

As a publicity stunt, pretty much doing anything different is good. However (imo), the idea should be fully-explored, with supporting material added to make the idea stronger and more germane to the effort.

They could've parachuted into the convention center parking lot and gotten 'publicity'.

Like I originally posted, the idea itself was a good one (not great, but it had potential). To me, it was like a second-baseman who dives into the hole and fields the hot shot up the middle, then tosses the ball into the 3rd row while throwing to first.

I will add one hint at why it feels 'weak' - to me at least.

If I was using the main proposition of 'voting' for 1 of a few choices for 'Megapixel Man of The Year', I would've at least given the choices their own parody CVs.

The whole idea of the parody is to get people to 'vote' (engagement), yet they've given readers no reason to vote for one over the other(s).

Do they get points for their pardoy bios? Jason | Matthew

"ladies who can deliver in all lighting conditions" - ??

I changed it to 'tough conditions' as I was not trying to imply anything about in the dark (which is, I assume is your concern, though WDR is for dealing with excessive sunlight not darkness).

This is the most prestigious award in the IP Surveillance Industry. These two candidates came to me in a dream while I was travelling with my team in the Amazon Rainforest during the great Megapixel Migration.

Throughout this awards long history the candidates are not selected but chosen through a series of ancient trials that are some of the most closely guarded secrets in the history of the human race. 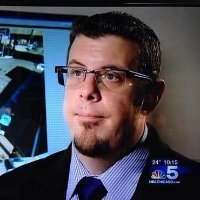 I smell a little inspiration from Dollar Shave Club

Josh you should have at least followed 1 more step and shaved for the bit! You must have just returned from the rainforest so I guess that's understandable... Well done otherwise...

If they took out about a full minute of Frank Addante congratulating himself for being a really smart guy, and injected him with a whiff of personality, I might move it up to a B.

Ok, well this is still the gold standard:

Just released the first interview to help you get to know the candidates:

The candidate was very cooperative in the interview.

If gold meant pointless, dumb and counter-productive. That video came across as whiney and condescending instead of funny or witty. And if you remember, I panned that 'Love Story' video mercilessly when it was released 3 years ago. :)

...AND called the creator a HACK for copying the Walmart camera Xtra Normal video

This could have been solid with $300 worth of production and an actor with any sort of delivery and comedic timing.

This is the single biggest award in the history of the security industry and nerves can get the best of candidates . Our candidates are chosen based on The Megapixel Man of The Years Higher Councils dream channeling in the forest's of the Amazon- they do not choose this life - they are chosen.

What's making this funny is Vunetrix commitment despite being lambasted.

Listen, better manufacturers try to amuse us than force feed us nonsense.

No winner was announced? I guess we ALL lost.

Marty Major demands to know who has won, but he is too embarrassed to ask himself!