The Most Expensive Bus Surveillance Ever

$21,000 per bus surveillance system. This is, by far, the most expensive implementation we have ever seen. The Massachusetts Bay Transit Authority is adding cameras to 200 buses for a whopping $6 million, part of a massive MBTA security undertaking fueled by Homeland Security grants. In this note, we review the project and try to figure out why MBTA paid so much.

IPVM obtained a copy of the contract [link no longer available]. Inside is an itemized breakdown of what the agency got from Minuteman Security Technologies. Take a look at line items 3 and 13: 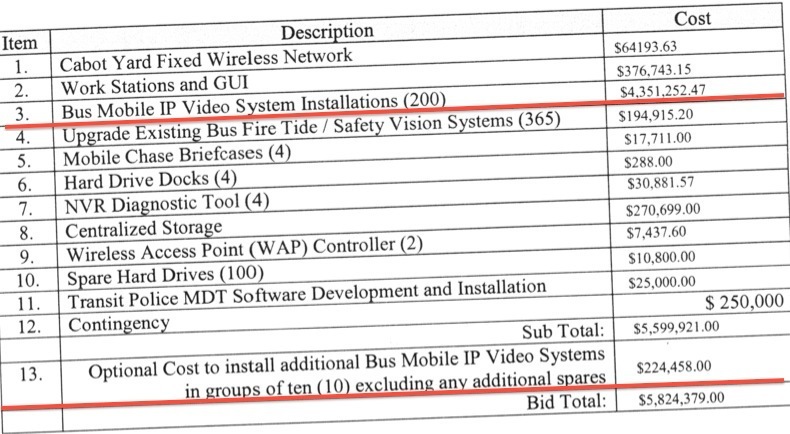 MBTA is paying about $21,000 per bus, multiples more than the average bus project which usually costs a few thousand dollars (e.g. Utah bus project). MBTA can install the system in more buses for $224,000 for every 10 (MBTA has around 1,100 buses).

This cost is in addition to $376,000 for "Work Stations and GUI" (which we believe includes the Vidsys PSIM), a quarter of a million dollars for storage and a $64,000 for a wireless network in the bus yard.

MBTA is putting a  handful of cameras, an NVR, wireless radios, a UPS and a PoE switch onboard. Panasonic and Genetec are reportedly the respective surveillance vendors.

Drawings released along with the original solicitation show cameras will have two configurations. The first configuration uses two 360 degree cameras and one fixed camera:

The cameras include 3MP vandal outdoor 360 cameras (like the Panasonic we tested) and 720p WDR cameras. Both of those sell for $1,000 or less.

The NVR, wireless nodes, POE switch, and LTE Gateway will be in a box mounted behind the driver’s seat. A 19-inch LCD monitor will be mounted on the outside of the box. The exact specs of all the components can be found in the scope of work.

They system will transmit video to the MBTA operations center via LTE and police near a bus will be able to live-stream footage. Footage will automatically wirelessly upload to a local sever when buses pull into the bus yard.z

Specifications say video will be stored for 60 days, but must be stored on the mobile NVR for a minimum of 170 hours at 8fps (live views will stream at 15fps).

Other Components of the Bus Systems

Minuteman has been responsible for much of MBTA’s security upgrades. The company did $1.7 million worth of upgrades of access control and emergency calls stations for MBTA in 2012 and is currently involved in four other projects that add up to another $7 million. This includes a $3.2 million contract to “install IP Video, Access Control, and Emergency call Stations at 3 MBTA Bus Yards,” according to contracting documents.

At least one reason for the increase in bus cameras is the rising number of assaults on bus drivers. Assaults on bus drivers had surpassed last year’s statistics. In June there had been 50 attacks on drivers compared to 33 in June 2012, reported WBUR. The assaults have included striking or cutting drivers and bodily fluid attacks with urine.

The MBTA has spent more than $60 million on security in the past decade, including $29 million in Homeland Security Grants in 2009, $6.6 million in 2012 and $3.25 million in 2013. With so much cash, it appears that they have little limits in what they spend or how efficiently they spend it on.

Even with MP cameras and wireless onboard, it is is hard to determine how the system could be that expensive, especially since the MBTA is spending $1.5 million separately on head end components (GUIs, storage, central wireless etc.). $21,000 per bus for 3 to 6 camera / NVR system, even with wireless is extremely expensive.

Moreover, considering that the average bus system runs a few thousand dollars, it is difficult to determine the benefit of the MBTA spending $15,000 more per bus compared to fully functional production systems.