Video Coverage of The Show

For the first time, IPVM has added in-depth video coverage of the show. As an example, below is a clip covering the 'Global Expo' section:

Inside, we have 20 manufacturer booth videos:

Plus, we have a 13 minute tour of the back of the show floor to show new products and smaller companies.

Plus, our roundup inside features:

Here is a video playlist of 20 manufacturers IPVM members expressed interest in:

And here is a 13 minute tour of the back of the show floor:

With the exception of Friday, which was fairly dead, show traffic was quite strong, with ISC saying this was the second highest attendance ever for the show. While that is positive for ISC, it also implies that they still have not gotten back to the traffic numbers of 7 years.

This fall at ASIS Atlanta in September will show whether overall show attendance is up or if ISC West is siphoning visitors from the ASIS conference.

The other big factor is the lack of breakthrough products. SIA / ISC recognize the importance of new innovations in driving attendance. For example, this ad: 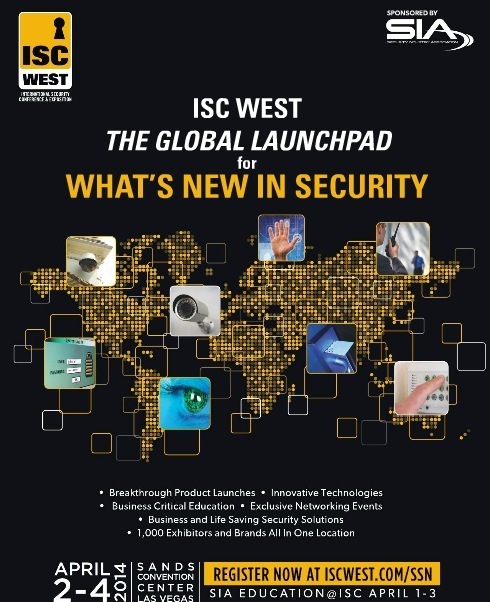 If this represents a continuing long term shift of lower innovation, it will be harder to attract a broader audience. No doubt, Vegas should not be underestimated as a draw, but diminishing new products makes it more of a Spring Break for security people.

Manufacturers raved about the show, with answers to our survey ranging from 'good' to 'exceptional', with a number also mentioning that the quality of leads was up.

However, manufacturers consistently responded negatively about new product releases, noting that, "generally a weak showing", "didn't really hear of any "can't miss" product releases", "not anything really ground breaking", "No special products or features were released", etc. A few mentioned 4K but half of them were negative comments, with one observing "Saw several companies with 4K products. Most did not look very good" which was consistent with our observations as well.

Last year, it was Bosch staring down Axis at the show floor. Now, it is Samsung with a mega booth directly across from Axis: 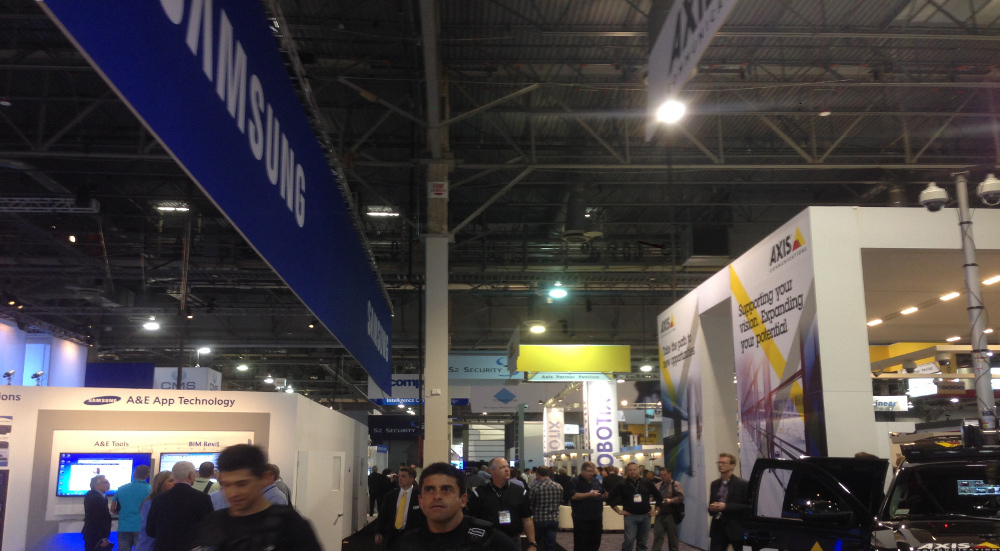 Samsung is really pushing hard to go directly after Axis, with far improved products at notably lower pricing than Axis.

Best Gimmick of the Show

If you sell alarm keypads, it might be hard to get people to come by, so how about you reward them with beer for spending a minute at your booth. That was SDC's well received approach:

However, in one of the more interesting moves of an otherwise uninteresting show, FLIR touted a new line of Mini bullet thermal cameras 'starting at $499'. Here's what they look like: 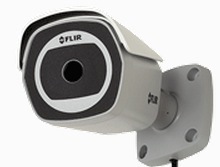 Plus, it would be a strong counter move to DRS who over the past few years has really changed FLIR on price (see Lowest Cost Thermal Camera Tested).

Sony had a camcorder in a outdoor box camera housing at their booth: 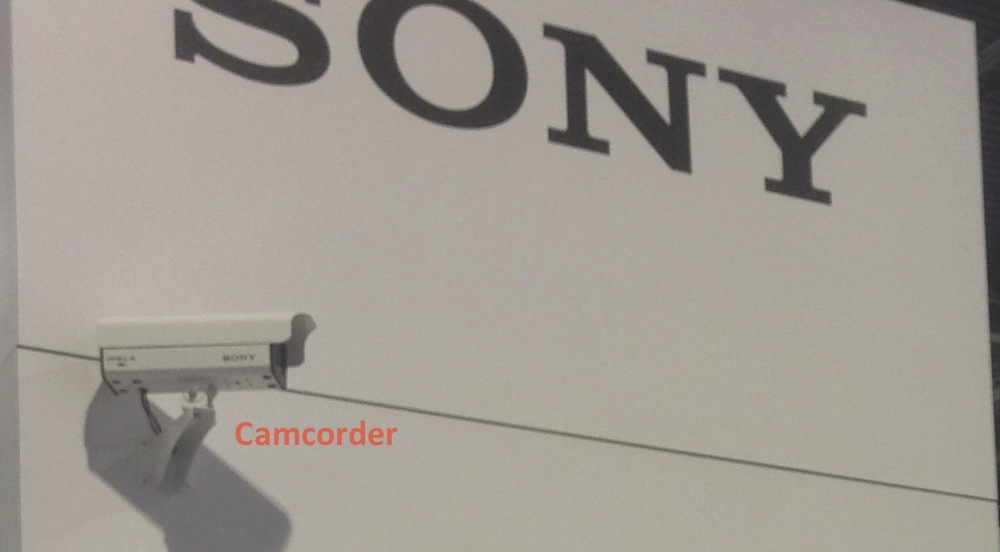 It's 4K and presumably it's from Sony, but it's not an IP camera and this is not a consumer electronics show, so it's bizarre.

Presumably, the point is the Sony Corporation is good at video (which we all know) but unless they have a real Sony IP camera coming soon, it is pointless and misleading.

When we first saw the bulletproof bookcase on the SIA NPS list [link no longer available], we laughed at the absurdity. This is the product at its booth: 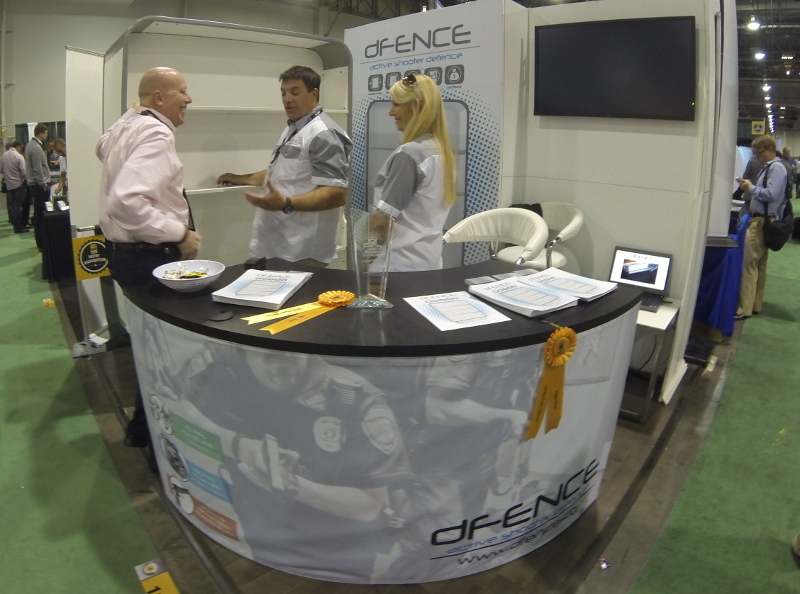 Alas, the joke was on us because the 'esteemed' SIA judges rated it as the #2 product overall out of more than 100!

On the other hand, 86% of voted that you are not interested in this contraption, thankfully.

OnSSI has a hat trick of bad marketing: 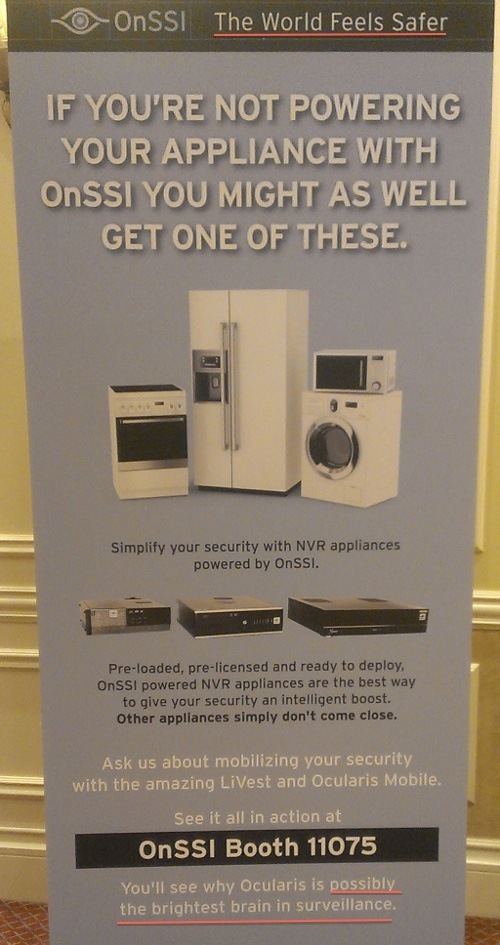 Why any VMS would compare themselves to home appliances is beyond us. Ostensibly, the pitch is basically, that just like Milestone, OnSSI now too has appliances, just like they have Milestone's VMS 'recording engine.'

And because of this, OnSSI offers a Woody Allen inspired tag line, 'the world feels safer'. "We didn't say it is safer, we don't claim to make it safer but maybe, just maybe, it feels safer."

And the tag line was prominently displayed on their booth as well: 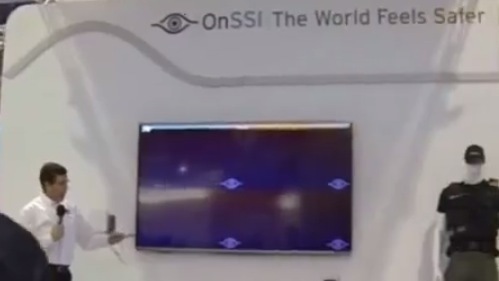 Fittingly, it was right above their 'LiVest', for the first responder who wants to stick a mesh wireless router in their pocket.

This from 'possibly the brightest brain in surveillance'. 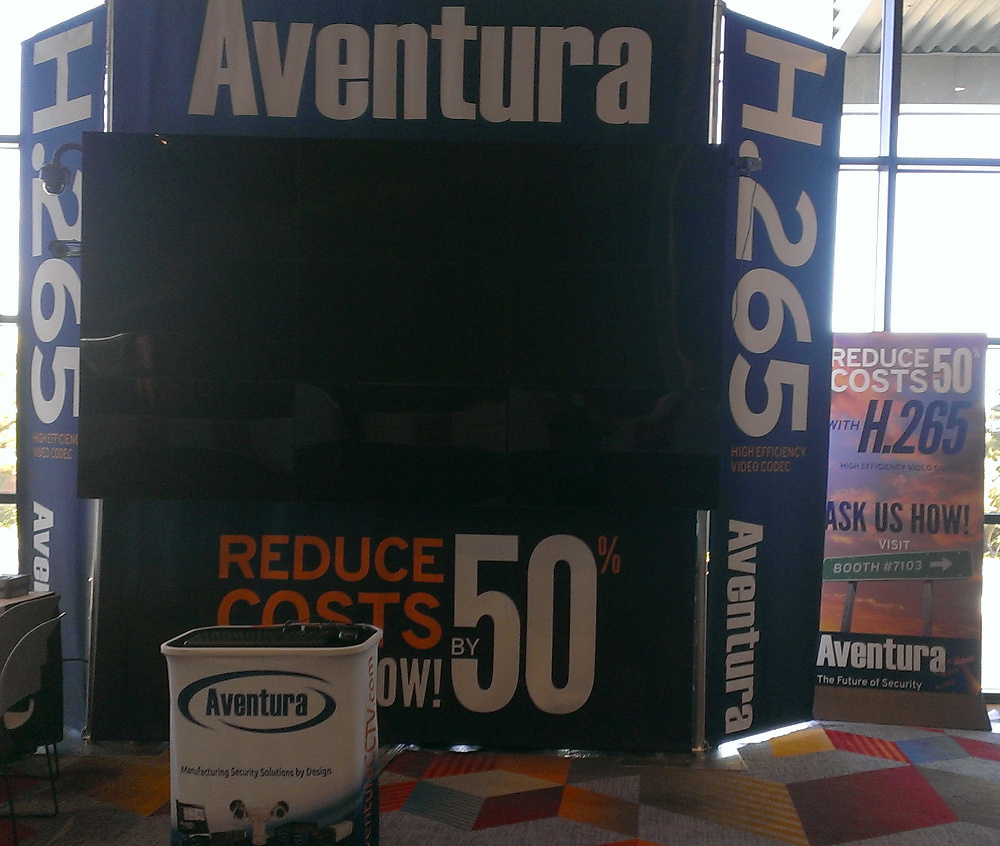 This, despite the fact, there is clearly more demand for H.265 bandwidth lower potential than the higher pixel count of 4K. See: H.265 vs 4K Ultra HD - IP Camera Trends

The most surprising surveillance exhibitor at ISC West was certainly Dropcam, going from the anti-security channel company to a fairly big, expensive booth: 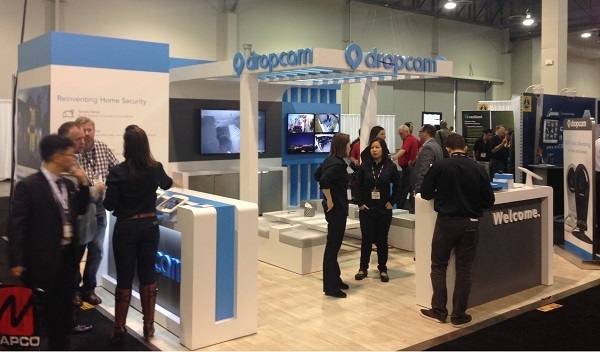 Dropcam admitted to us that, while they were looking for security installers at the show, they do not have determined plans, programs or pricing in place. There's a lot of debate about what Dropcam will eventually do. But with tens of millions of VC money to burn, we expect an expanded, more professional product lineup that will interesect or conflict with the more establish industry.

Trying to gain attention, Lilin showcased their 4K cameras with: 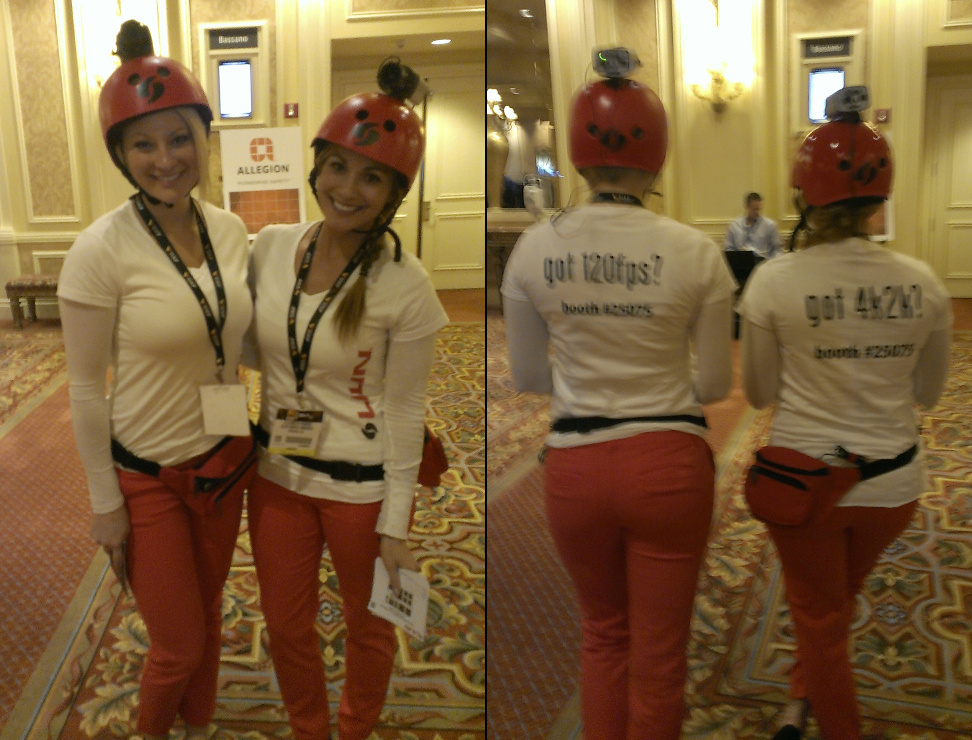 Though not much in the way of Lilin branding there...

Another manufacturer touted their 4K:

Again, hard to find the company but it is Sentry360 and they are going all out on marketing this.

We are, however, increasingly skeptical of the impact that 4K will have, though for smaller manufacturers, like Lilin and Sentry360, it is certainly a way of getting attention.

Ferrari in a Booth?

Eerily reminiscent of Dedicated Micros' bizarre mix of hobby and business, IC Realtime is doubling down on their Ferrari campaign: 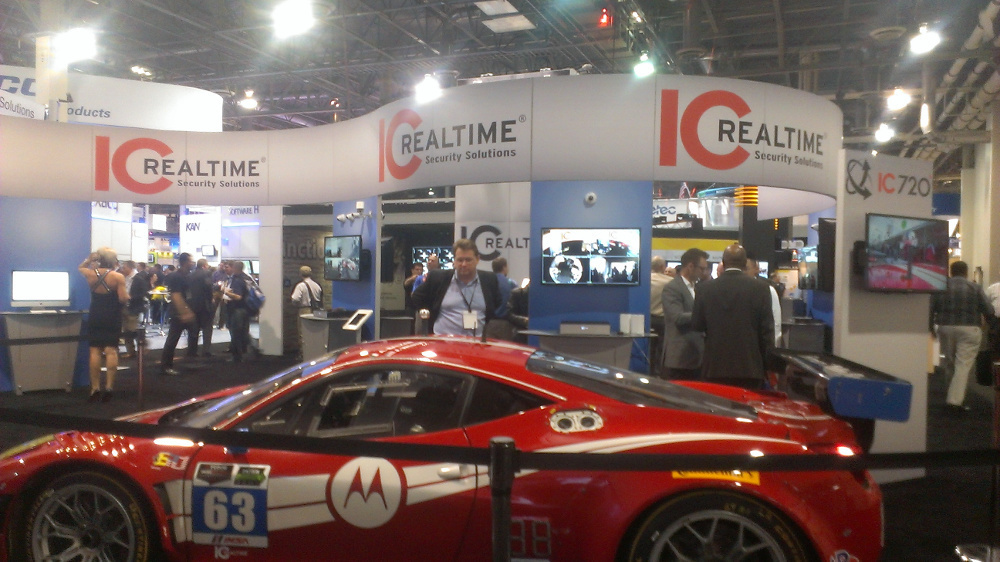 This is part of their launch of the (expensive) 720 degree ball camera and quite a lot of money to spend on a gimmick.

Many were wondering what the 'Power of 4' from Axis was. It's a fairly mundane marketing campaign: 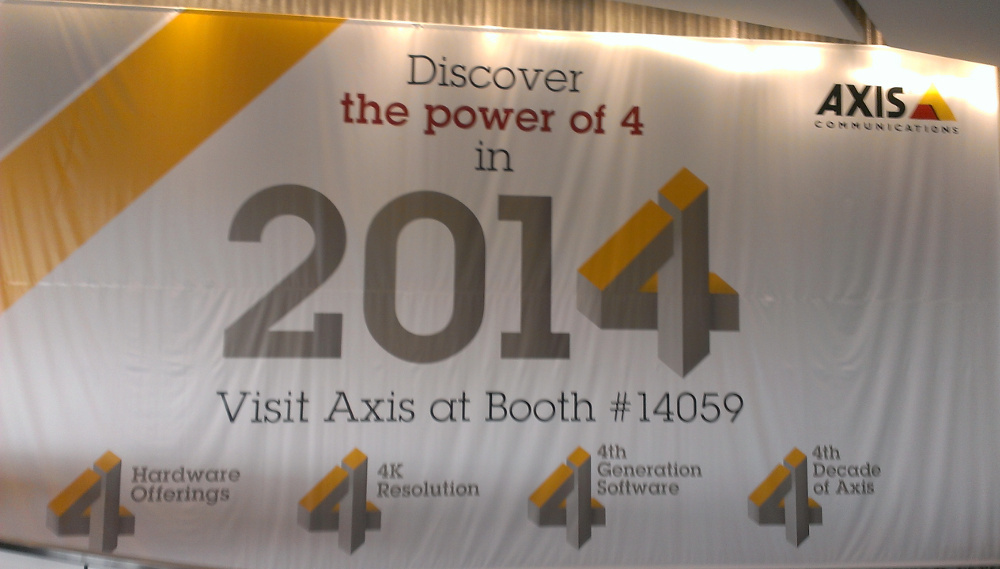 On the new product side, it features their proprietary VMS incremental advance and their new 4K Ultra HD cameras.

The 'money booth' - Another popular gimmick put on by another unpopular company:

Arecont is the last major IP camera manufacturer to offer a 'super' low light line, but it is going to be 'stellar', as their graduate school posterboard explains: 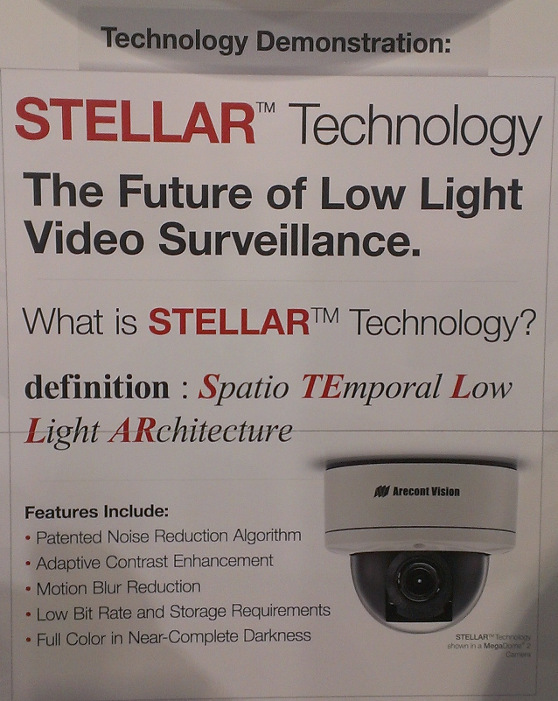 Most interesting aspect is that it uses a 1 inch Aptina imager, which is far greater than the 1/3 inch ones other 'super' low light offerings use. Arecont informs us that it is a 1/3" imager like all their competitors who already have such cameras.

It is, as usual for Arecont, a "technology demonstration", meaning they will be lucky to release it by the beginning of next year, though they say Q3 is their projected release date.

Make Your Own Camera in a Garage

Literally, for you trunkslammers out there, make your own camera in a garage: 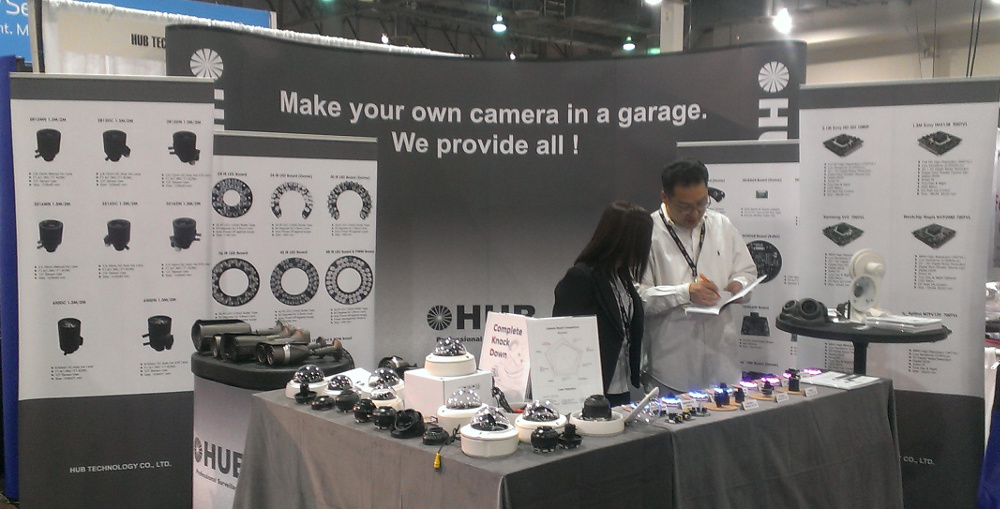 It's a Shenzhen company, HUB Technology [link no longer available]. Obviously this practice is not novel but advertising it on the show floor is fairly eye opening.

Now, BRS is going to the cloud, trying to get some revenue, and one trade mag captured it well:

In fairness, though, that tactic worked with their fund raising. Maybe they can get all their mom n' pop investors to buy systems...

Oh and they issued a press release touting this, and I quote, the "biggest step ever taken in video analytics."

No One Notices Genetec?

Not to be outdone, Genetec has taken to the show floor with a puzzling poster as well.

See if you can even spot Genetec's logo? (hint: upper right hand corner).

Inside the Sands, Avigilon has much more utilitarian and straightforward marketing claims than in years past:

Also, Avigilon has released datasheets on their 8MP,12MP and 16MP H4 cameras. Most notably, CCD imagers have been dropped in favor of 1+ inch CMOS imagers.

Literally a mish mash of buzzwords on a poor contrast background: 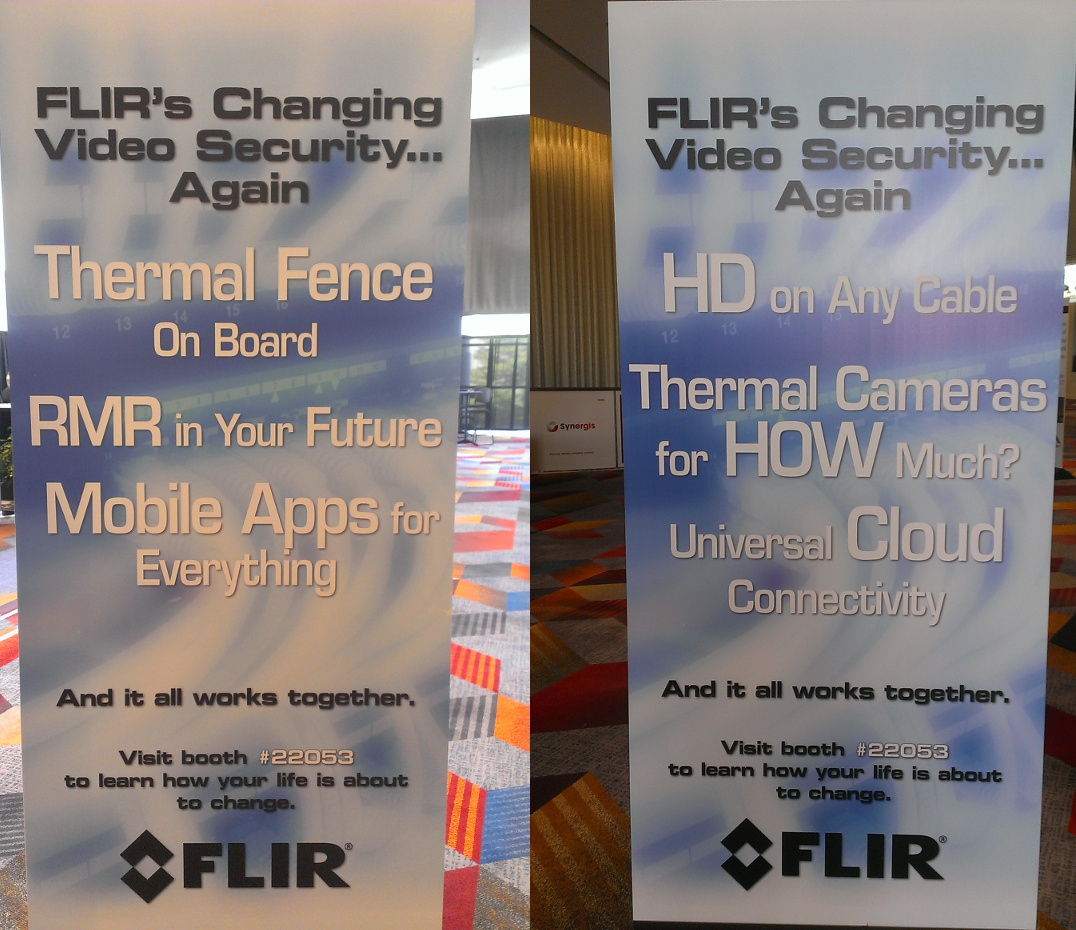 FLIR continues their evolution from thermal leader to Speco 2.0.

Speaking of which, Speco is officially the last manufacturer to go IP:

Perhaps the most eye catching ad around, this is either for the world's first cyborg video surveillance system or... 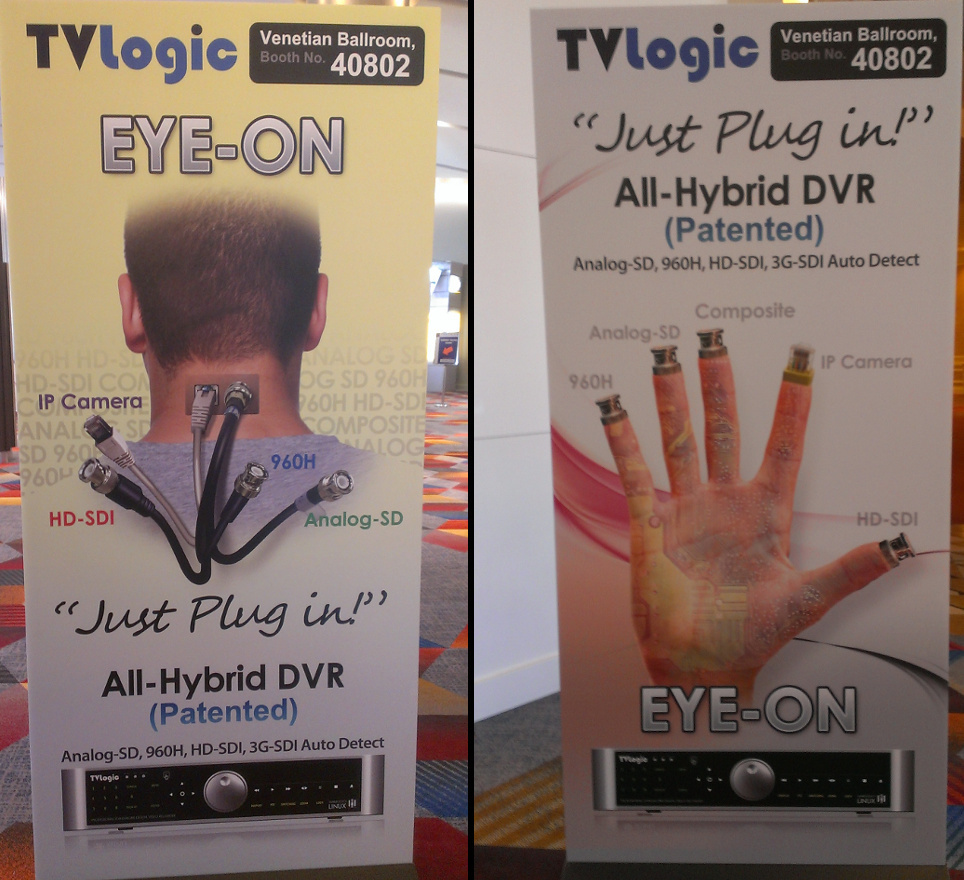 The pitch is an interesting one as many legacy systems want the flexibility to mix and match, migrating over time. The challenge is the hardware cost to support such flexibility.

Dropcam Has A Booth

Perhaps the most surprising exhibitor is Silicon Valley hot startup Dropcam whose contrarian market approach has been to sell direct online, in Apple stores and now Target.

However, Dropcam has a booth at ISC West, interesting considering this show's dealer / channel focus. They have a relatively large booth for a new company (at 20 x 20) but all the way in the back of the show floor.

And here is what Dropcam told us they are doing at ISC West. 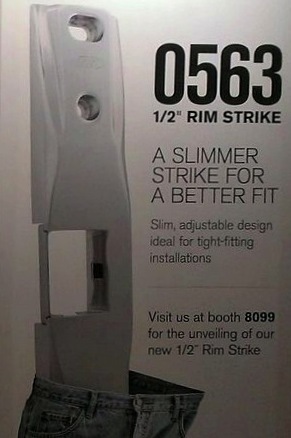 New door hardware is common, although it always addresses a niche problem. Take the example of RCI's new 0563 strike - pretty status quo, unless you happen to have lots of doors using pullman latches. The body of the strike is just under 1/2" thick, meaning surface mount exit devices can swing extended exit device (pullman) rolling latches without binding or colliding.

Are you pumped up yet? RCI hopes that after this show, you will be.

ISC has their official twitter account, ISC Events, with 5,000+ followers but have not tweeted in a week. Instead, they are using SIA's twitter account, which only has about half the followers. Makes no sense but fyi if you want official show updates.

Speaking of twitter and marketing, manufacturers are not the only ones pulling out the tricks.

One enterprising local small business has embraced the #iscw14 hashtag:

#ISCW14 Treat yourself to a fully NUDE dance while enjoying your favorite ALCOHOL. Call 702-327-7258 for a free limo pic.twitter.com/IfEd3tNJGm

That's one option if the lack of new options bores you....

On the plus side, no booth babes spotted at the show this year, a welcome change compared to last year's ISC West 'party girls'.