Can you take the best of traditional DVRs and merge that with the best of megapixel IP video? That is the objective of a new recorder from Lilin called the 'NVR Touch [link no longer available]'. In this note, we examine with features, pricing and positioning of the unit compared to VMS software and NVR options from Milestone, Exacq, Synology and QNAP.

The NVR Touch looks a lot like a traditional DVR, most notably on the controls on the face of the recorder and the user interface, show below: 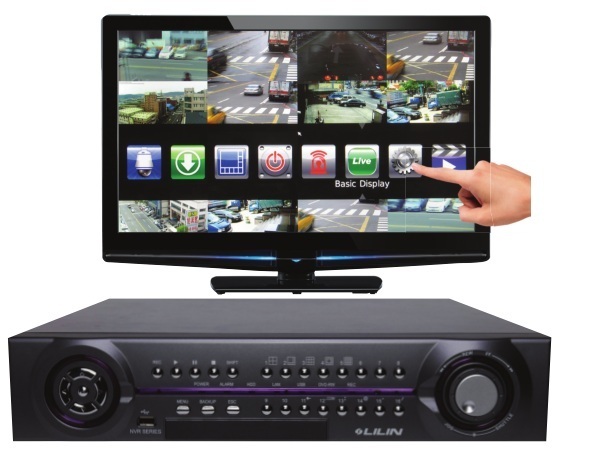 On the IP side, Lilin says the recorder can operate as both server and client, noting support for, "16 streams at 25fps per stream and at 1080p for display and record, HDMI output for the main monitor plus an independent spot monitor that can give any multiscreen view independently or work as a spot." While this is common for DVRs, many IP based NVRs are expected to only record but not locally display video.

Lilin offers 4, 9 and 16 channel version of the NVR Touch (thoughly only the 16 channel unit is shown on their site currently). According to Lilin, the 4 and 9 channel version's main differences are a smaller form factor and no integrated DVD writer.

Street pricing of the 16 channel unit, without hard drives, is estimated to be ~$2,000 USD. The recorder supports up to 8 hard drives, JBOD only, no RAID support.

A key feature Lilin is marketing for this recorder is touch screen functionality (ergo, the 'Touch' NVR). To get a sense of the UI, Lilin's marketing video below is worth watching:

On the one hand, we are skeptical about the adoption of touch screens within the surveillance market. Our recent poll and discussion [link no longer available] notes many concerns. However, it may be an interesting differentiator for some.

More importantly, we think the use of a small number of large buttons simplifies use for non-technical and untrained end users. As our survey results of end user VMS complaints shows, usability issues are a major concern. This NVR could be highly attractive for users who prioritize simpler operation and may be especially useful for those organizations more comfortable with the simplicity of their traditional DVRs.

[UPDATE: In some of Lilin's marketing material, they claim it is the 'world's first NVR with touch screen operation'. Not that you or I care about who's first on a feature that is of questionable value but OnSSI has had a touch screen VMS for a number of years.]

We see two main groups to compare this NVR to: (1) NAS NVRs and (2) embedded professional NVRs: