A joint effort by the Los Angeles County Sheriff's Department, Amazon and SendUs, LEEDIR [link no longer available] (Large Emergency Event Digital Information Repository) is an international system for collecting and managing video after a major emergency. We talked to Commander Scott Edson about its inception, and its first live test coming up on March 28th.

This video shows how it is supposed to work:

LEEDIR is available to any law enforcement agency in the U.S. or abroad that needs a way to collect and sort media after a large-scale event. The event has to be a multi-jurisdictional or multi-agency event, must impact more than 5,000 people or must cover more than five square miles.

“That covers your major terrorist event, but also natural disasters so that media can be used for disaster recovery events as well,” Edson said.
The service will be free for law enforcement, however there may eventually be a paid option that allows agencies to use it for every day crimes.

Law enforcement agencies will sometimes set up pages to collect video after an event, but LEEDIR provides an already packaged system. For example, the FBI used this page to collect information after the Boston Marathon Bombing.

Upon activation, a webpage would be created with a url identifying the event (ex. www.leedir.us/CaliforniaEarthquake). Agencies would use news media, social media and local information campaigns to solicit video, images and audio from the public. Edson said ideally, agencies would have an information campaign so the public knows LEEDIR is available.

“The idea is that the public download the app ahead of time, even though they will still be able to download it later or upload it directly from a desktop to the website,” he said.

Once uploaded, an agency’s detectives would have access to all of the media and can tag, sort and add notes to media. The media that turns into evidence can be downloaded to agency severs and the files that are not can be deleted or stored indefinitely in LEEDIR. 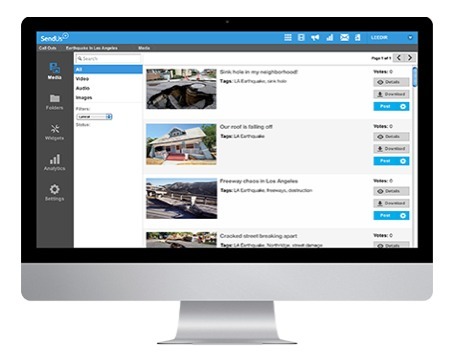 The public will be able to upload media at the dedicated page created for the event or from the LEEDIR iPhone app. The app, which was recently added to the Apple Store, is a simple interface that allows a person to upload media from their phone, Facebook account and Google account. A person can also upload their own contact information so law enforcement can contact them to follow up. 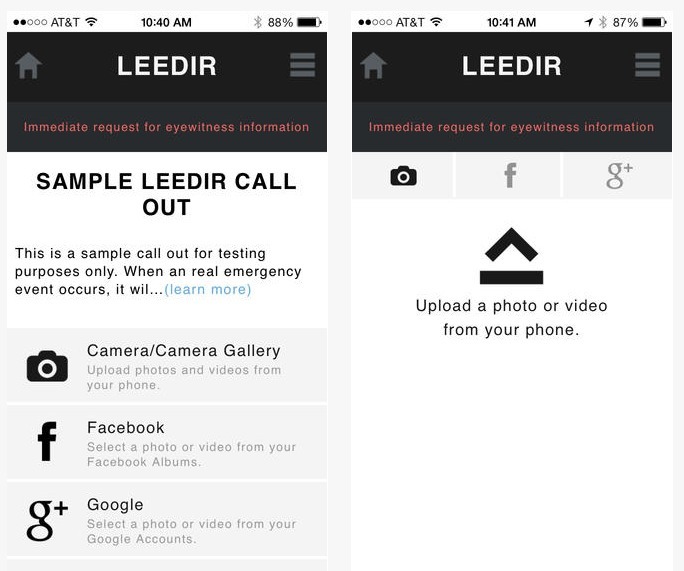 The Android version of the app will be released March 23rd.

Google recently filed a patent for a video repository and system that automatically alerts law enforcement of an event based on videos with similar geolocation, time or event data. The patent suggests it would be used for emergency events as well.

Edson says this tool is not related to that project. In contrast, LEEDIR is only activated when needed, while the Google technology would be continually ingesting videos being uploaded and looking for connections.

The first dry run of LEEDIR is schedule for March 28.

“We’ve asked people to send us pictures and videos so we can exercise the system,” Edson said. “We want to see how the stuff looks coming in [at a large volume] and to make sure law enforcement and comfortable with the case management aspect. We also want to make sure the technology does what it says it can do.”

At the end of the day-long exercise, the sheriff’s department will release more immediate stats from the dry run. Later, it will produce an after-action report.

To participate, LEEDIR says to go to the site and upload images or a video 60-180 seconds long to the LEEDIR webpage. The videos must be uploaded between 9:00 a.m. and Noon, Pacific time.

“The video can be of anything, but we encourage video of people in public places, malls, shopping centers, convenience stores, vehicle traffic, etc.,” says an announcement distributed about the test.

“As submissions are uploaded, investigators at the LASD Cyber Investigations Center (CIC) will review, manage, analyze and distribute the photos and videos as they would during a real major emergency event, to better inform their emergency response teams and gather evidence.”