We spent hours on the ISC West show floor today and yesterday checking out what is interesting and have come away with a series of observations, images and one juicy rumor about a top manufacturer up for sale.

Here are the topics/companies covered:

The show floor looked filled with vendor boothes, with no empty boothes visible in any main area. This is a bullish sign for vendor spending, at the very least.

Traffic too is quite strong across the board from side to side. Here is a video the captures the front of the show mid morning:

On the other hand, new product releases continue to be fairly weak and limited in total number. This is a negative surprise and seems worse than last year.

For ISC West, Interlogix baked a cake. Too bad it looks just like an Arecont SurroundView camera.

In a show filled with packed exhibits, Mobotix's big booth stood out for an alarming lack of traffic.

When you do not have strong product, do parlor tricks - literally in Vicon's case: 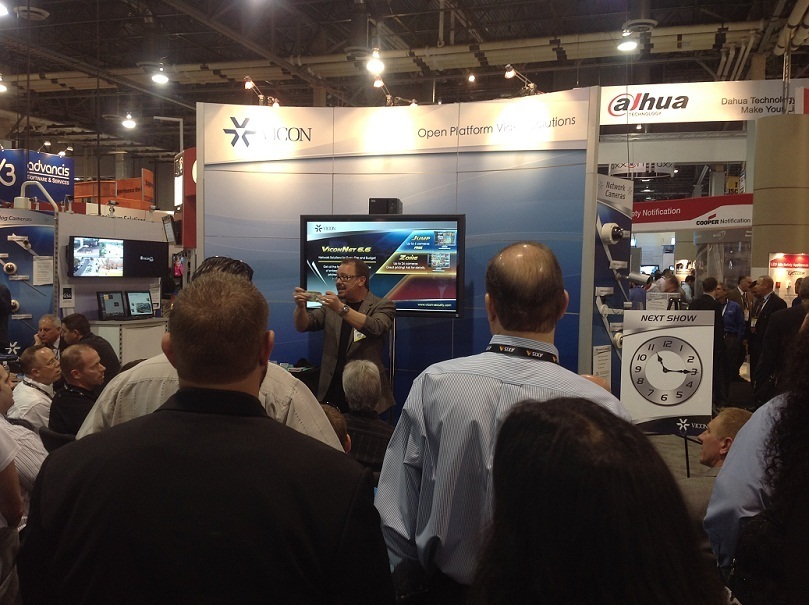 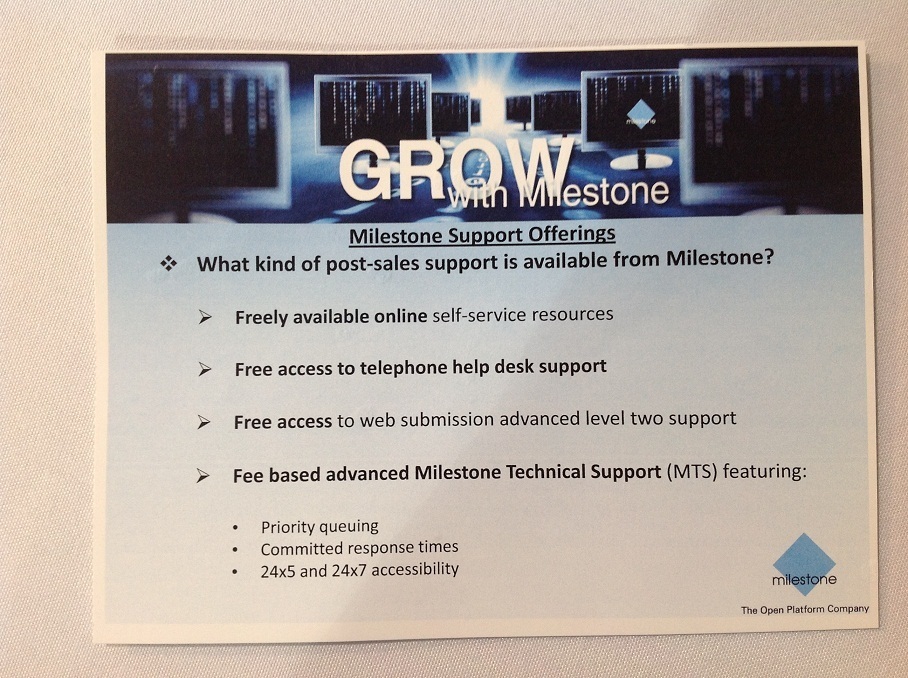 OnSSI had a huge booth: 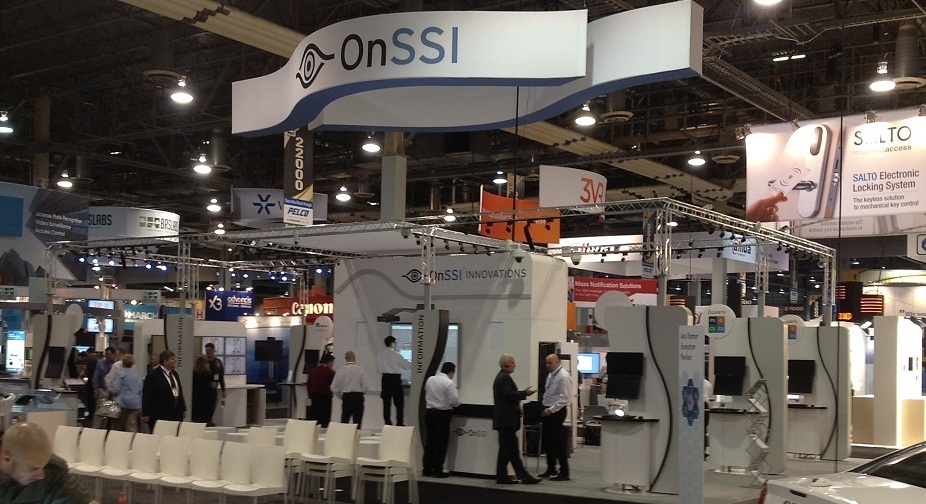 Plus, OnSSI has an unclear, buzzword filled banner at the entrance to the show: 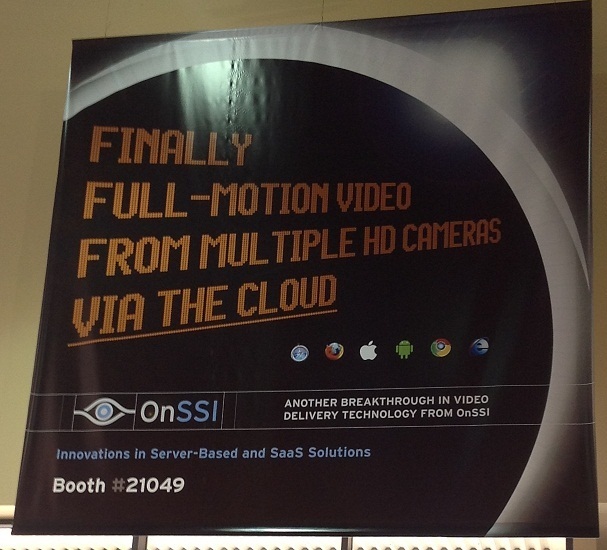 Pelco has increased its use of the Pelco brand. Remember at ASIS, we debated how minimally the Pelco logo was displayed. This show it is clearly larger and more prominent:

However, Pelco does not seem to be showcasing many (or any) major new product innovations. Indeed, the marketing campaign is centered on 'integration': 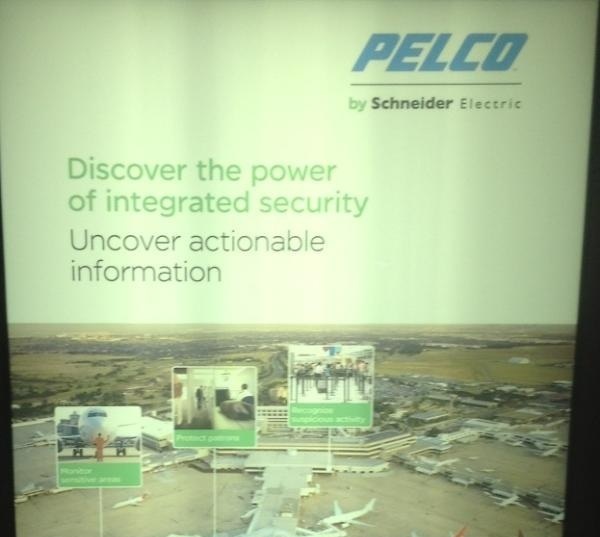 Integration is typically a poor excuse of a large company who turns to marketing complete packages rather than best of breed products. On the other hand, it is better than announcing a cake.

The Tyco ad is simply befuddling.

"I am an RMR junkie The community fuels my passion." Tyco is as confusing now as they are irrelevant.

Here's another bizarre Tyco - "I am an IP Warrior".

Bosch is building a 50 foot tower of camera and recorder boxes, promoting their entry level line. It's one of the more eye catching things on the show floor.

One of the most striking juxtapositions on the floor is Arecont marketing multi-megapixel right next to VMS developer ipConfigure marketing gigapixel. Of course, Arecont is well known for their high resolution offerings so it is quite ironic that a VMS manufacturer is next to them marketing 50x the resolution.

ipConfigure has quite a large booth dedicated to demonstrating gigapixel. The only downside is that it is recorded video, not live. Real time gigapixel might not be practical on a show floor but it would be useful to get a sense of how it really operated.

China mega supplier CSST has a fairly large booth at ISC West. They market themselves as an "Integrated Smart City Solution Provider" which is understandable in China where they have deep connections but not likely in the US.

I suppose they are here selling to OEMs in North America. While the company might be huge in China, they continue to be a non factor in the US.

As a number of manufacturers laughed to us, "Object Video has to have balls to exhibit at this show." Nonetheless, Object Video is here, albeit buried in a tiny booth in the last row across from Siberian Arsenal:

Remember, manufacturers you have only a 60 day amnesty to turn yourself in. Just make the long walk to the far edge of the show floor.

The best rumor on the show floor is that a big name VMS company is putting itself up for sale. We considered this to be one of the weaker companies that likely needs to make an exit.

This VMS company has a much larger booth than they normally do and is bordered by Germany, Sweden and Quebec. Walk the show floor and figure it out :)

Alarm.com Business Market Expansion on Apr 13, 2018
Alarm.com has millions of subscribers, but the company has traditionally been...
Comments : Subscribers only. Login. or Join.