Just four years ago, IP camera standards were no more than a dream. All IP cameras were integrated with proprietary interfaces or using the simplest most basic connections. This added to the cost of using IP and blocked out many cameras from being used.

About two years ago, it became clear that ONVIF had beaten PSIA as the industry's choice for an IP camera 'standard'. Today, ONVIF has massive adoption while PSIA's video efforts have stalled. ONVIF lists over 1800 products [link no longer available] from more than 100 manufacturers supporting their 'standard'.

Clearly, standards have evolved from a dream to an operational reality. It is very possible to use ONVIF to connect most of the IP video products around the world. However, how often is that really happening? How well is it working out?

In order to find out how these issues have really impacted ONVIF's usefulness in the eyes of integrators, and how often it is being used in production deployments, we asked the following question of integrators in our Spring 2012 survey: 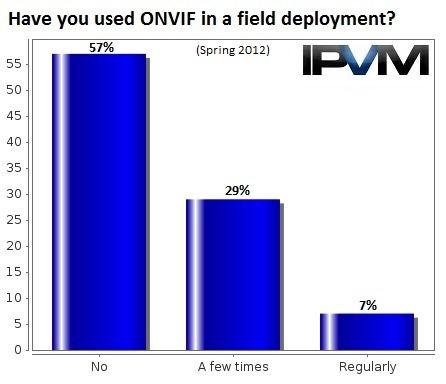 The ability to use cameras which are not directly supported by a preferred VMS was the number one reason given by both those regularly and occasionally deploying ONVIF. Most often, this is done to use lower-cost cameras, such as import brands. However, new models of camera may also use ONVIF until direct drivers being written, as well.

These types of integrations do not always perform as expected, however, with multiple comments indicating such:

For those who have never used ONVIF in a field deployment, the most common reason was that it was simply not necessary, as their chosen cameras were supported directly by the VMS. For many, if not most, combinations, this will be true, as VMSs often support dozens of manufacturers and hundreds or cameras, or more.

Lack of faith in the features ONVIF will provide was the other key reason given for not deploying it in the field. This segment generally felt that ONVIF was not ready for prime time, and needed more development on both the VMS and camera side before it could be as useful as direct integrations:

Though the majority of integrators are not deploying ONVIF today, many had expectations that ONVIF would become more of a factor in the future, as development continues. We believe this is true, as well, and further developments to ensure compatibility, such as the ONVIF profile system released early in 2012, will improve the perception of ONVIF's readiness.