Auto back focus has become a more common feature in the past couple of years, with many, if not most, new IP camera offerings containing this capability. Manufacturers claim that auto back focus reduces installation time and makes focusing cameras easier, especially at megapixel resolutions. How do integrators, the ones actually using (or not using) the technology really feel about it, however? As part of our Fall 2011 survey, we aimed to find out.

We asked the following question of over 80 integrators, "How important is auto back focus / auto focusing capabilities?" Their response breakdown: 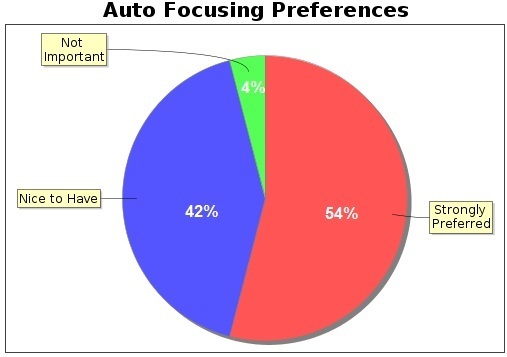 The first, and most commonly cited, reason integrators answered that they preferred ABF was savings on installation and maintenance of cameras. This is most often purely time savings, since the technician sets the camera's field of view, and pushes the auto back focus button. However, rental of lifts for cameras which can't be reached by stepladders is also a factor.

The second reason integrators preferred auto back focus was for ease of focusing megapixel cameras. Focusing cameras above standard definition can become difficult. Using composite outputs, which many megapixel cameras are equipped with, it's difficult to adjust fine focus with a handheld monitor, due to its small screen size. Carrying a laptop, which has better resolution and a bigger screen, up a ladder is also a hassle, leading many integrators to use two men to manually focus cameras, which can also be difficult to manage.

Since focusing megapixel cameras was mentioned numerous times, we expected that those deploying more megapixel than SD cameras would more strongly prefer ABF. However, the percentages between these two groups were nearly identical, which would suggest those deploying SD cameras appreciate the benefits of ABF as much as others.

Trends Based on System Size

ABF preference increased significantly among those integrators deploying more than 32 cameras per site. Among these integrators, 71% strongly preferred ABF compared to only 39% for integrators typically deploying less than 32 cameras. While any labor savings is beneficial, even on small systems, it stands to reason that those deploying large systems would realize greater benefits than those only installing a handful of cameras at each site. It can also reduce the amount of time rented lifts are required on site, resulting in further savings.

Auto back focus has become a more and more common feature in IP cameras in the past 1-2 years, with manufacturers both major and minor adding it to the new products. Based on this feedback from integrators, we would expect this trend to continue or strengthen, with ABF becoming less of a nice feature to have, and more of a standard feature expected of all new IP cameras.

Top Features For Easy Camera Installation (Statistics) on Jun 05, 2018
Camera installation is the most fundamental and common task for video...
Lowest Priced Auto Focus Cameras on Aug 06, 2015
Auto-focus has historically been regarded as a high-end feature, found on...
Surveillance Statistics Survey Directory Vol 1 on Jan 03, 2012
In this report, we aggregate and present dozens of statistics about how...
Comments : Subscribers only. Login. or Join.