One of the biggest legacy brands in high end access control was Hirsch, who merged [link no longer available] and was absorbed within Identive in the past few years. The company was best known for its 'Scramble' line of products [link no longer available], and enjoyed brand-name specification in government markets as a result. However, in recent years, competition has grown fierce. Is a new, less expensive offering a solution to this challenge? In this note, we examine the recently announced Mx Controller system [link no longer available] (no relation to Mobotix).

The Mx Series is available in three basic configurations: a two, four and eight-door base model. Through the use of an eight-door expansion board, the total can be brought to 16.

While an individual unit is limited to a specific number of doors, larger deployments can 'daisy chain' multiple cans together and be managed from a single interface. The system is entirely panel-based, meaning there are no 'door controllers', and door hardware is homerunned back to the main panel. The subsequent cost of running bundles of 18/6 and 22/4 long distances limit this product's appeal for larger facilities where the panel can be hung relatively close to each controlled door.

From a technology standpoint, the offering is not especially novel nor unique.

An image of the MxController is shown below: 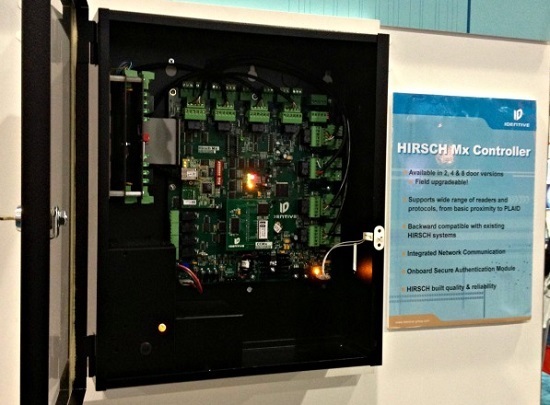 Other attributes of the offering that stand out are:

The new entrant is designed to give existing Hirsch/Identive dealers a competitive offering to the likes of Lenel, Software House, and S2 in government sales. With sequestering and budget cutbacks a reality for government sales, the likelihood of simply being 'written in' to a specification is greatly reduced, and Mx Controller allows dealers to compete on a per-cost basis against other vendors.

While exact pricing is a function of mode and dealer discount, the typical Mx Controller system is targeted at under $2000 per controlled door. The cost of the panel is projected to range from $500 - $900 per door, about half the price for previous versions from Identive/Hirsch.

The Mx Controller works with legacy Hirsch ScramblePads, ScrambleProx, and ScrambleSmartProx/ secure keypad readers. Unlike other systems that may only provisionally operate with these devices, Mx Controller maintains encryption from the reader into the panel. For high-security or ultra-high security (SCIF) deployments, this backward compatibility might be required when upgrading or expanding a system.

While it does not break new ground from a functionality standpoint, the Mx Controller allows for existing Hirsch/Indentive dealers to compete against mainstream offerings in the critical government/high security vertical.