After years of rumors, door access control giant HID has formally announced its next generation of IP door access controller with 'EVO' [link no longer available]. In this note, we examine how EVO change's HID's 'IP controller' offerings, and compare pricing of new models to previous generations. Since EVO is being billed as a major update, the question very quickly becomes: What is different? In the list below, we provide some answers:

HID announced EVO releases for two separate lines of access control equipment: HID EDGE [link no longer available] and HID VertX [link no longer available]. While some overlap in deployment exists, in general, Edge is best suited for 'small deployments' of 8 doors or less and VertX is best used in mid-range door counts, between 4 - 32 doors per controller. Both systems, however, are scalable to hundreds of doors in hundreds of locations; provided they are all commonly networked.

Updated features include the following:

Pricing for EVO is equal to non-EVO products:

Cosmetically, the devices are unchanged and feature the same dimensions, weight, and indoor-only (ie: not outdoor rated) enclosure types as their predecessors: 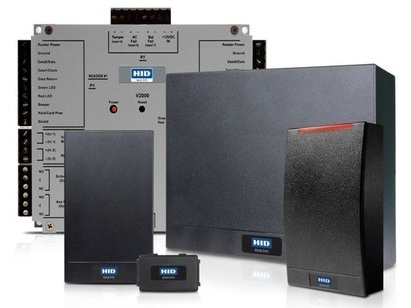 This update continues HID's focus of placing IP at the door, and while not significant in functional changes, marks the continued refinement of HID's networked door controller in the segment. Application of the product for low-end small deployments is not impacted. However, for larger deployments and for high-security customers, the design improvements allow EVO to be considered in specifications where they previously could be disqualified:

High Security: The addition of encoding the data exchange between the reader and the controller afforded by EVO make it eligible to be used in most strictly interpreted HSPD-12, SCIF, and FIPS-201 installations. A detached interface module allows for the controller to be installed in a secure area away from the immediate door itself. This is useful for deployments prohibiting the installation of security equipment outside of secured and monitored areas.

Easier, Quicker Install: The added Hi-O functionality, which is the biggest marketing push behind this update, translates to quicker installs when using an end-to-end ASSA solution (eg: controllers, readers, locks, and hardware). The system 'autodetects' other Hi-O branded hardware, and supports pre-terminated proprietary connectors. This speeds the installation process over manual methods, but requires the use of ASSA hardware.

Anti-Passback: Aside from now accommodating for two readers, the single most significant improvement for EVO EDGE series controllers is the 'anti-passback' feature. This improvement now means that a logic rule is shared between devices that prevents credentials from being used improperly (eg: cannot pass thru an 'In' reader twice, without first passing 'Out'). This feature is especially useful in high-security facilities or when the access control system also is used as a time clock system.

Other Product Impacts: In most cases, partners using HID EDGE and VertX as OEM controllers will be upgrading to these new controllers during the course of the year. The scope of this update includes EDGE, EDGE Solo, VertX V1000, and V2000 products, although that the schedule of obsolescence varies by product and the new products will continue to be backward compatible with older systems.