Everyone seems to be going 360, even thermal cameras now. While panoramic cameras provide sweeping coverage area, traditional approaches could not 'see' very far nor terribly well in the dark. Now, a new high end and expensive thermal 360 offering aims to overcome these issues for monitoring critical infrastructure and military bases. In this note, we examine the features and pricing of this thermal 360 compared to Sony XI and ipConfigure GWAS offerings.

The IR Revolution 360 is a panoramic thermal imaging system with a cooled thermal sensor mounted on a rotating head, creating a full 360º panorama every second. The camera is typically mounted on its own tower or atop buildings. Three sensor configurations are available, with specified detection ranges between 1-3km, in vertical fields of view of 5º, 10º, and 20º. No optical zoom is provided, only digital zoom, as this sensor uses a fixed lens.

Instead of stitching together images, as some wide area surveillance systems (such as ipConfigure's GWAS system or Sony XIs), the thermal sensor creates the panoramic image by scanning each line in the vertical field of view. This image is output in a proprietary image format (i.e., not H.264 or MJPEG) for processing by their central server and client.

HGH's Windows-based client software, named Cyclope, is used for monitoring the system. This image illustrates this client and various window types it contains: 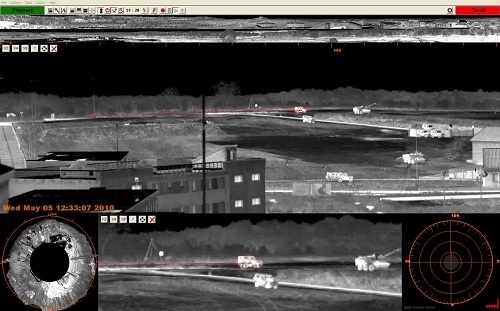 The full panaromic image can be seen at top, with a large zoom window below, and a smaller, more closely zoomed window on the center bottom. The image at left bottom is a "disk" view, a circular composite of the panorama. Users may create any number of zoom windows by clicking and highlighting areas in the panorama or disk views.

Cyclope also performs image analysis on the full panorama, detecting and tracking object. In the image above, this is illustrated by the bounding box around the center vehicle, with its travel path in red behind it. No classification of objects is performed, only highlighting of the object present, and alert generation. Operators must classify the object.

The system compensates for areas in constant movement by marking them as "normal" after a learning period. Things such as blowing tree limbs, a running generator, or wave movement are ignored by this feature, so they are less likely to generate nuisance alarms.

The manufacturer's video below shows the system in action:

Finally, Cyclope may perform recording functions in addition to monitoring. Images are not typically recorded in their raw format, as each camera generates about 1TB of data per day. Instead, if recording is desired, video is transcoded to an AVI format, 25-30% of the original size.

The IR Revolution 360 system may be integrated in two ways:

An IR Revolution 360 system has end user pricing of ~$250,000 USD. HGH has no channel sales through distribution, and sells direct to end users or through integrators.

The most likely competitive options for HGH are wide-area surveillance products such as ipConfigure's GWAS system or Sony's XIs, though significant tradeoffs exist among the three:

The biggest advantage of the HGH is its (relative) fast frame rate. The biggest disadvantage is its lack of built-in color/megapixel camera.