Hard drive failures are possibly the number one reason for lost video in the surveillance industry.

To get a better idea of how long drives last in the field and most common causes of failure, we asked two questions of integrators in our Winter 2012 survey:

To start, let's look at a histogram of responses to the first question, which breaks down results by frequency of integrator responses: 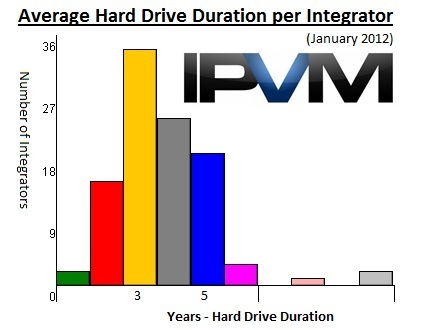 The majority of respondents answered three or four years, with two and five years also having a solid showing. Answers of eight and ten were definite outliers in this survey. Looking at these numbers, the average hard drive should be expected to last between three and four years in video surveillance applications.

By far, the most common reason given for hard drive failure was heat, with 42 mentions in integrator responses. This may be linked to normal use, improperly ventilated enclosures, or lack of maintenance. Integrators commented that some DVRs/NVRs are poorly designed in regards to ventilation, exacerbating hard drive issues. This number also reflects upon the importance of regular maintenance. Something as simple as blowing dust out of PC fans on a regular basis could easily extend hard drive life.

Second most commonly cited were power issues, such as spikes, sags, and failures. We touched upon this issue in our analysis of UPS deployment statistics, as one of the key reasons for deploying UPSs in surveillance systems. With small UPSs, capable of preventing abrupt power failure to standalone DVRs, NVRs, or servers, available for little more than the cost of a hard drive itself, it make financial sense to supply one with any surveillance system.

Video Surveillance Hard Drive Failure Statistics 2016 on Jul 22, 2016
Hard drive failures are decreasing and lifespans are getting longer,...
Eagle Eye Cloud VMS Tested 2015 on May 28, 2015
Genetec has added cloud VMS, Exacq is releasing theirs in a few months,...
Video Surveillance Statistics Directory Vol 2 on Mar 18, 2012
In this report, we aggregate and present numerous statistics about how...
Comments : Subscribers only. Login. or Join.