Here's a video from Guardly on how the app works:

In 2012, the company announced its expansion into enterprise deployments [link no longer available] offering Mobile Mass Notification systems for larger operations and indoor positioning systems. [link no longer available] It began partnering with universities to deploy the technology and to date it has been deployed in "Fortune 2000 companies, and cities & municipalities," the company said.

The company aims to eliminate carrying and charging secondary devices for emergency alerts, focusing on technology that people almost carry with them, their phones. It also wants to eliminate the need to seek out emergency call boxes, help locate people indoors and provide location data quickly.

Guardly Command is its cloud-based incident management system shown in the video.

The company has also created an indoor position system using WiFi technology that can transmit building, floor and room location. Using WiFi instead of cellular allows the system to work even in places with dead zones like parking garages. If the campus already has WiFi, no additional equipment is needed.

"Guardly IPS uses radio frequency fingerprinting from fixed WiFi and Bluetooth sensors which, as part of the deployment process, is set up by Guardly staff by mapping the building's floors and rooms with the Guardly mobile application," the company says.

Organizations can also use Guardly Command to send mass notifications to employees or students on a campus.

A complete deployment of these services and Guardly Command takes three to five days, the company says.

The service for individuals is free to send text alerts to only emergency contacts. The premium service which includes calling 911, sending photos from the mobile phone and web collaboration costs $1.99/month or $19.99/year. The company says the cost for universities/enterprise deployments depends on the size of the student body, but declined to give specific numbers. See the whole pricing list here [link no longer available].

What Happens Upon Alert

The call and the email include the address and details of the alert. The app also calls 911 and a link to a page for the incident provides location and phone to 911 dispatchers. Both the responders and emergency contacts can connect via conference call.

The app also has and instant messaging feature that allows a use to communicate with police agencies using Guardly Command or other emergency contacts when they aren't able to talk.

The app uses a phone’s GPS to broadcast the phone’s location to people on the list and that network is also notified if the app’s loud siren is activated. Here is the screen when Guardly is initially activated and during an emergency. 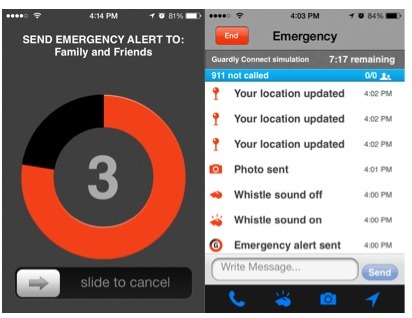 To reduce false alarms, the Guardly app vibrates when launched to alert a user and also features a countdown timer. The timer is an adjustable time delay from when the alert is triggered to when it sends a notification. This allows someone to trigger the alarm if they find themselves an a sketchy situation that turns out to be nothing, like a suspicious person walking rapidly in their direction, for example. It does still seem like it would be easy to trip a false alarm if a phone’s keypad lock feature isn’t enabled.

The app is available for iOS, Android, Windows Phone and Blackberry devices.

Guardly recently announced that it raised $1.45 million to expand and improve Guardly Command. There are numerous other panic button type apps, but none of them has gone on to expand into enterprise yet. Many sites, like hospitals and large corporate campuses, already have mobile duress systems but they don't always provide accurate location data or have to use a separate mass notification system. Guardly combines many of these into one platform on devices used by most people.