Google wants to leverage its massive load of video uploads to determine if crimes, terrorist events or disasters are unfolding. Recent patent applications from Google show that the company is developing plans to leverage analysis of those videos into an alerting system. In this note, we examine the details of those plans.

Google has applied for a patent on a system that would send law enforcement alerts based on groups of videos uploaded by users. The main patent is titled Inferring Events Based on Mob Sourced Video. There is also a second patent for the feature to sort the video (Mob Source Phone video Collaboration).

When a number of video clips with similar time and geolocation information are uploaded, a computer program can transmit a notification to “a law enforcement agency to a news organization, to a publisher of a periodical, to a public blog, etc.” The notification indicates that something significant has likely happened at that time and location.

In one version of the invention, the computer system would automatically group the clips together in a folder for an event. If the number of clips exceeds a certain amount, then it would send a notification. The notification would be sent to organizations based on location. For example and notification of an event in Manhattan “might be transmitted to NYC Police and Channel 7 New York ... an event at 3:00am might go to the police but not a television station.”

Getting permission from the authors of the videos is also a consideration. “In one embodiment, an author of an uploaded video clip is asked for permission for the video clip to be considered in the inferring of events. Video clips are included in groups and counted only when the author has granted his or her permission,” the patent says.

Here is a flow chart of how it would work: 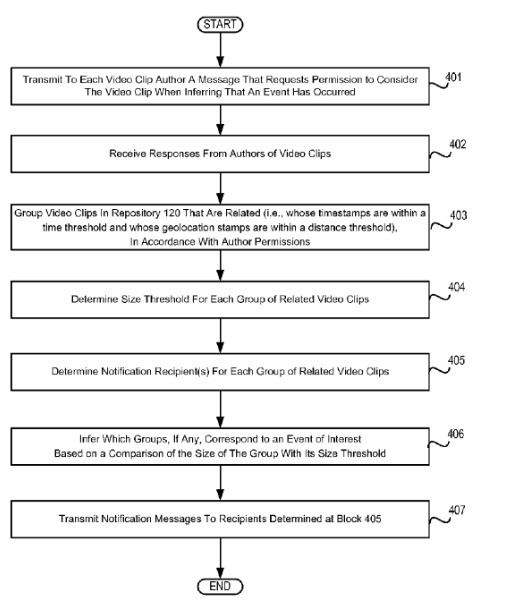 All crowdsourced type material is only as good and valuable as people make it. It is not clear how this would help in any kind of an emergency event unless the threshold was very low, but then that would cause a lot of notifications for less than significant events. They will have to determine an accurate threshold for this to be effective in real time.

Where is could be helpful, however, is for gathering video from after an incident like the Boston Marathon Bombing. After people went home and uploaded their videos from the marathon, an alert could tell law enforcement about the videos coming in. In fact, police then could ask people to upload their videos for that reason. And even though the patent also refers to sending alerts to news agencies, it's clear that it is geared more toward law enforcement use.

The patent is still in early stages of the application process. Also, large companies like Google file numerous applications, which can take years or may never develop into commercial products.