In this note, we examine the features, pricing and positioning of the first gigapixel surveillance camera ever released. This offering is from ipConfigure and is called the GWAS or Gigapixel Wide Area Surveillance [link no longer available].

Gigapixel photography has gained significant mainstream interest. Gigapixel offers a massive amount of resolution and is pretty amazing to view. (See for yourself by scanning through this gigapixel image gallery.) As its name implies, gigapixel images deliver 1000 times the resolution as a megapixel camera (1 Billion+ pixels). To do so, a camera moves across a scene capturing areas piece by piece and then stitches that into a single image. The clear upside is that you now have massive resolution displayed in a single image. The most obvious downside is that it takes time to move a camera across a wide field of view, resulting in image generation latency and ghosting affects (where a subject is only partially captured - see sample ghosting image). 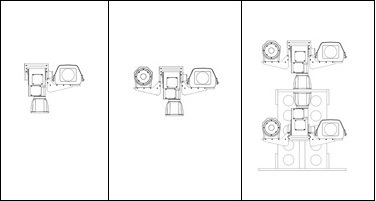 Since we have never used a gigapixel surveillance camera, we are limited in our observations. However, there are a few key structural points that clearly deserve consideration:

This noted, just like the Dallmeier Panomera that generated significant interest, we expect there to be many inquires into this product because it is unique and offers unmatched total resolution.

Manufacturer Revenue / Financials Directory 2016 on Jun 05, 2017
This report contains data on the revenue of 32 security manufacturers, trend...
Multi-Megapixel Deployment Statistics on Jan 01, 2012
Megapixel camera resolution increases regularly, with manufacturers pushing...
Winners and Losers Fall 2011 on Sep 25, 2011
Now that the dust has settled from the new announcements of the last month,...
New Surveillance Products Directory Fall 2011 on Sep 21, 2011
This report provides a summary of key announcements and news being made...
Avigilon 29MP Camera Examined on Sep 19, 2011
Avigilon has announced a 29MP camera, which becomes the highest resolution...
Comments : Subscribers only. Login. or Join.