Over the past few years, Firetide has struggled to gain the upper hand against lower-cost options like Ubiquiti (whose explosive growth impacted the entire market until it became the target of counterfeiters). In fact, our Favorite Wireless integrator survey results showed how critical low cost and inexpensive competitors impacted the market.

Now, Firetide just announced the HotPort 5020, a relatively inexpensive (for them) wireless node, it hopes will get the attention of customers who need wireless mesh networking but do not want to spend a fortune doing it. The company says the 5020 came from feedback from customers who said they felt 7000 series nodes on the edge was overkill for many applications.

Firetide says the 5020 is ideal for devices that require an always on connection like sensors, ITS gear, and wifi networks. “This is about reducing the cost of having Firetide on the edge of a network and we think this will open up a whole range of applications,” says Firetide spokesperson Tim Cox. “Let’s say I want to secure a customer's RV park but I don't want to spend thousands of dollars on nodes at the edge of the network. Now with this price point it’s actually affordable to do that.”

The full datasheet for the 5020 includes the following diagram to show where Firetide says the 5020 (shown in red) would be most effective: 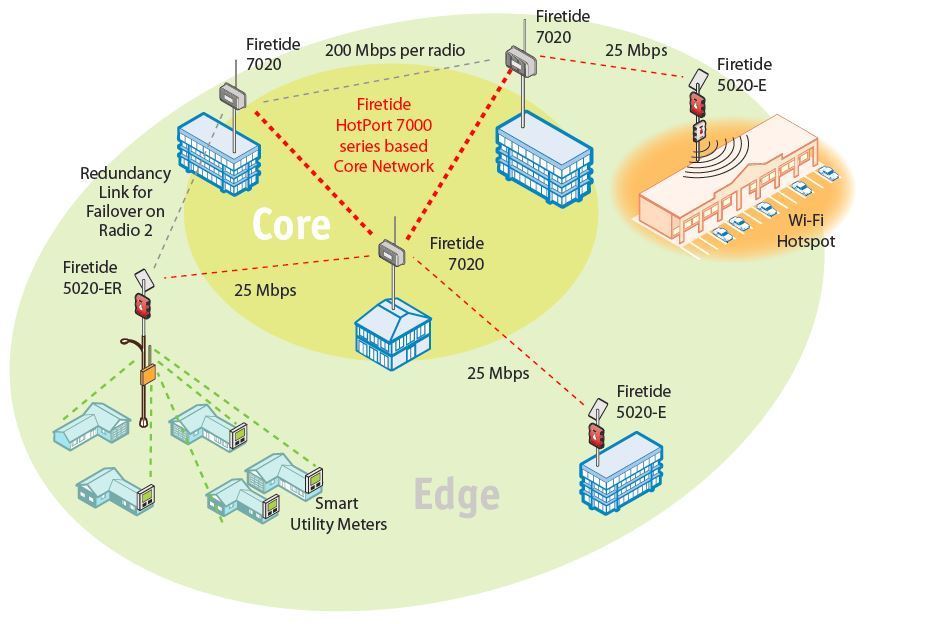 And this diagram shows how it can be used to build a WiFi network for site: 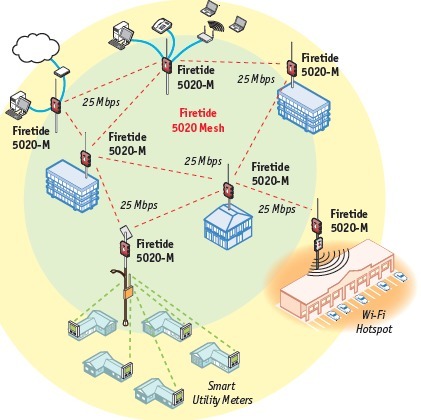 Firetide says the 5020 may not be ideal for hi-definition video surveillance, but Firetide does mention video surveillance in the datasheet for the 5020-LNK, the 50 Mbps point-to-point model of the 5020. 25 Mbps is more than enough to run 2-3 cameras, making the 5020 much more cost effective for small camera count locations (such as 1-2 cameras on a pole) than existing 7000 series models.

Compared to Firetide's existing 7000 series (MSRP $2,495 to 4,400 USD), the 5020 is about half the price. This greatly reduces overall cost of a Firetide network when 5020s are used at endpoints instead of previous models. This reduction in price also strengthens Firetide's position against Fluidmesh, whose mesh radios range from ~$560-3,300 depending on configuration and throughput.

However, at $1,295 and up, it is still far more expensive than low cost wireless products such as Ubiquiti or MikroTik, which retail for as little as $80 per radio. Users who do not need the more advanced features Firetide offers (mesh, redundancy, etc.) will likely stick with low cost solutions such as these.