Using wireless networking to connect video surveillance cameras has increased in the past few years, certainly helped by the strong growth of IP cameras. However, what type of wireless systems should one use and who are the 'best' manufacturers for surveillance?

To find out what integrators truly prefer, we asked the following question as part of our Fall 2011 integrator survey:

The question was left open-ended, so integrators could choose their favorite instead of being confined to a preselected list of options. We also gave space for comment so they could explain their choice, or why they didn't deploy wireless.

Three wireless manufacturers stood out with a surprising underdog top choice. Additionally, unlike with cameras and VMS systems, integrator responses showed far less maturity and far less consensus in total choices. Inside, we examine these points in depth. 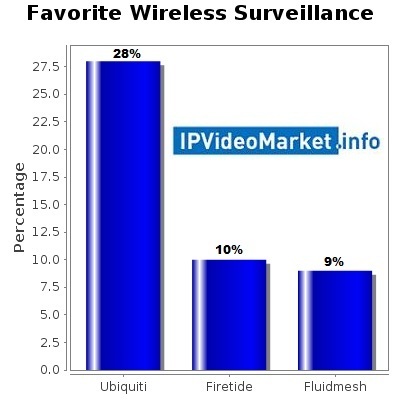 With 27.5% of respondents preferring it, Ubiquiti receives more than double the votes of runner-up Firetide (10%), and more votes than numbers two and three, Firetide and Fluidmesh (9%), combined. A total of fourteen companies were named, but only three others, Motorola, Proxim, and Tranzeo, received more than one mention.

From a technology and product positioning standpoint, the results make more sense. The bulk of the market requires only simple point-to-point or point-to-multipoint links, not more complex mesh networks. Ubiquiti is well-suited to these sort of projects, with integrators regularly commenting positively regarding their simplicity and reliability, at an extremely low price point. Ubiquiti has been growing rapidly because of this, veritably killing the wireless market.

Firetide, on the other hand, is not really intended for the mass market, instead focusing their product development on mesh offerings for large, often city-wide, deployments. While they do offer point-to-point products, the cost of a Firetide point-to-point link is easily 10x the cost of a Ubiquiti link, placing them outside the budget, as well as the needs, of most integrators.

Fluidmesh has built a limited, but faithful following, falling between these two competitors. We have heard reports from integrators that it is simpler and less prone to issues than Firetide, and Fluidmesh's tiered throughput licensing allows integrators to pay less for links with lower bandwidth needs, making it more cost effective, though still well above Ubiquiti.

Wireless surveillance has no doubt grown in the past few years. Previously, when analog video was still dominant, integrators seeking to deploy cameras wirelessly often needed to deploy encoder/decoder combos or proprietary analog wireless systems. The advent of IP has simplified this process, and wireless products themselves have become simpler, as well. However, there is still a substantial segment of the market avoiding wireless deployments, for various reasons.

Out of the 84 total integrators who took our survey, a total of 21 respondents either skipped the question or had no preference. This represents 25% of the total sampling. Clearly, this is a non-trivial percentage, when compared to other questions in our survey, such as favorite VMS or camera, which both had 100% responses with preferences. While wireless has come a long way, it obviously has not yet become an everyday occurence for many deployments.

Preferences Not as Concentrated

Even among integrators having a favorite, the top 3 responses only gathered 45% of votes. This is much lower than in VMS software and IP cameras where the top 3 gathered over 60% of the votes. We believe this also shows the lack of maturity in this market segment and the questions that integrators still have.

Here's what integrators preferring Ubiquiti had to say:

100% of comments from integrators with a Ubiquiti preference mentioned price as a factor, with the most common adjective used being "cheap". However, nearly every comment also mentioned reliability and ease of use, as well. This is what we've heard from our userbase, and which we expanded on in more detail in our recent Ubiquiti overview.

[Note: Since November, we have significantly increased our coverage of Ubiquiti. However, this was largely in response to the survey results completed at the end of October. As such, our recent coverage could not have impacted integrator's favorites as it came afterwards.]

Here's what users had to say about Firetide:

Lastly, respondents had the following to say about Fluidmesh:

Favorite Products on Aug 01, 2020
Security integrators periodically report on their favorite and worst products...
Surveillance Statistics Survey Directory Vol 1 on Jan 03, 2012
In this report, we aggregate and present dozens of statistics about how...
Top 5 Disruptive Surveillance Companies 2012 on Dec 15, 2011
What companies are driving changes in the video surveillance industry? What...
Comments : Subscribers only. Login. or Join.