When selecting storage for an IP surveillance system, there are four standard options: internal / direct-attached storage (DAS), network-attached storage (NAS), storage area networks (SAN), and on-camera edge storage. All of these have a place in surveillance applications, with different manufacturers supporting different options. In order to find out what integrators truly prefer, however, we asked the following question as part of our Winter 2012 survey:

Before we examine integrator favorites, let's review the terms / types:

Here is the breakdown of the results: 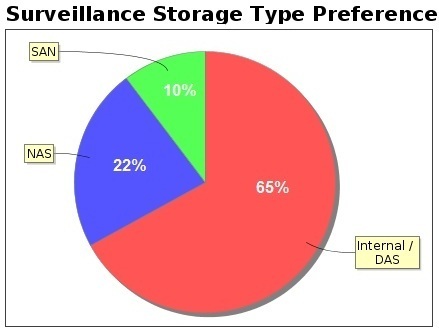 Nearly two-thirds (65%) preferred internal or direct-attached storage. Overwhelmingly, the reason given for this preference was that DAS was easier and simpler to deploy, and more reliable, with less to troubleshoot. Both of the other options require more network configuration and setup than simply using storage directly connected to the server. Additionally, since the network is an added variable, troubleshooting becomes more complex.

Some comments from those favoring direct-attached storage:

NAS (22%) and SAN (10%) storage were second and third in our results, totaling up to about one-third of all responses. Note that in examining these results, we combined these two technologies, as there seemed to be confusion between these two terms, with some respondents using them interchangeably. Further, while there are differences between NAS and SAN devices, there is now some overlap, with some NASs able to act as SANs using iSCSI protocol. We therefore found it best to look at these two options together.

A variety of reasons were given for choosing NAS and SAN, though most common were reliability and scalability. Network-based storage may have an advantage in case of server failure. Since the storage remains in place, a new server may be brought in and configured, and continue recording to the same location as the original server.

Some comments from those preferring NAS/SAN storage:

Two comments also touched on the benefit of using NAS storage to protect against theft. In small systems, if a thief were to make off with the PC being used for recording, all video evidence will be lost.

With only three percent of respondents preferring edge storage, it is obviously a distant last in this survey. Given how few truly workable edge storage solutions there are in the industry, this is not surprising. Preferences for edge storage were best summed up in this comment:

Respondents preferring other solutions also commented on the concept of edge storage, stating that they didn't feel it was ready for enterprise use today, but expected to see it in the next few years.

When reviewing these results, surprisingly, system size did not play a major factor. Some may expect to see very small systems jump to near 100% DAS preference, and a higher preference for SAN storage among large systems. However, the distribution of responses remains about the same across all system sizes. Also surprising, responses were close, within a margin of error, between those deploying a majority of analog cameras vs. those deploying a majority of IP cameras.

While there are no similar surveys from the past, our gut feel is that the percentage choosing network based storage has risen considerably over the last five years. In 2012, it is nearly 1/3rd of respondent's favorite but we would be surprised if it was more than 10% in 2007. Internal / Direct storage may still be the overall favorite but it is clearly under attack by network storage.

Going forward, in the next 5 years, we expect Internal / Direct storage to fall into the minority of integrator favorites. The two biggest threats look to be NAS devices and on board storage. NAS devices offer a very low cost way to get more than enough storage for the average surveillance deployment. Storage on board cameras is getting to the point where SD card costs are reasonable for moderate duration surveillance storage and VMS support is becoming available.

Video Surveillance Statistics Directory Vol 2 on Mar 18, 2012
In this report, we aggregate and present numerous statistics about how...
Comments : Subscribers only. Login. or Join.