Biometric credentials are more than just fingerprints. A growing trend in access control readers is face recognition, but is it dependable enough to be the primary credential for access control? Entertech Systems [link no longer available] thinks so, and their FaceStation Access Termina [link no longer available]l is designed around it. In this note, we examine the company, the terminal, and the face recognition technology behind it.

Face Station uses biometric information to authenticate users separately from the 'host' access control system. A database of biometric details - in the case of FaceStation, images of user faces - is stored an accessed independently of the host EAC system credential/card holder database. However, the host access control system database of cardholders is stored in the networked face reader. When a face image is validated as an approved record, the reader unit associates the face image record with a card holder record, and sends the face match information to the host access control system using cardholder credentials as a wiegand string.

Entertech is the US distributor and reseller of Suprema's line of access control terminals. While Entertech is the primary reseller of the company's products in North America, Suprema is responsible for the engineering, development, and manufacturing of the FaceStation.

The primary attribute of Entertech System's FaceStation are the dual onboard cameras. One of the cameras is a 'standard' visual unit, and the other is an IR-only unit. The manufacturer claims this arraignment offers the advantage of measuring the ‘image depth’ of an image based on its IR signature, so the reader cannot be spoofed by pictures. In addition, the addition of the IR layer adds additional mapping features used by the recognition algorhytms, which the company claims increases the accuracy of reads. The unit is shown in the picture that follows: 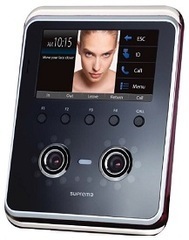 Networked or Independent Operation: FaceStation units are networked to a central server, but operate as stand alone units if the network drops. In this case, the internal log capacity holds 1,000,000 transaction records or 10,000 image logs. However, unlike card readers that are directly wired to door controllers using 18/6 wire, the network segment between the Face Station and the EAC panel/controller is vulnerable to network failures in a way that traditional systems are not.

When using the Face Station without an additional enterprise EAC system, the readers can be wired to control door hardware directly from the reader and be centrally managed using device embedded or server installed BioStar Management Application.

Quick & Contactless Authentication: While other readers require contact to initiate a read, the Face Station automatically detects a person attempting to be read, and the on screen prompts help align them into position to be read. The unit then scans faces automatically with no user intervention required. While Entertech claims the authentication process takes under 1 second, we have not tested the unit’s performance to validate.

Entertech System’s FaceStation relies only on face credentials for access. Most readers that use face recognition do so as an option among several types - fingerprints, veins, or PIN numbers, and seldom use Face Recognition as a primary method of credential. These products feature backup or redundant credential methods to assure access is not prevented based on bad reads.

Face Recognition is still a technology fraught with troubles - simple everyday clothing changes like hats, scarfs, or eyeglasses can prevent recognition software from working. Unless the credentialing pool of users is tightly controlled against this type of variation, Face Recognition as a sole entry credential will have problems.

Fingerprint readers are a fraction of the cost of FaceStation. Mainstream biometrics manufacturers, like L1/Bioscrypt (soon to be MorphoTrust USA) sells a number of combo fingerprint/finger vein readers in their "4G series" than range from $600 - $1400 street price. Also, SafranMorpho's MorphoAccess 100 is a fingerprint-only reader, but can be purchased for ~$500 distribution pricing. It features the same number of input/outputs and networked credential management topography.

Considering fingerprint has less operational drawbacks, we see most end users seeking biometric solutions to pursue fingerprint. Unless there is a specific requirement to credential based only on face, the constraints and costs of the technology are still to great for widespread deployment.