Despite strong opposition from most in the industry, dummy cameras continue to be one of the top selling security products online. Right now, a dummy camera is currently the #2 top result for "surveillance camera" on Amazon.com. But how realistic are they really? In this report, we put seven of the most popular models head to head against each other and compare to real cameras to answer just that.

For starters, the image below contains only one real camera. Can you guess it correctly? 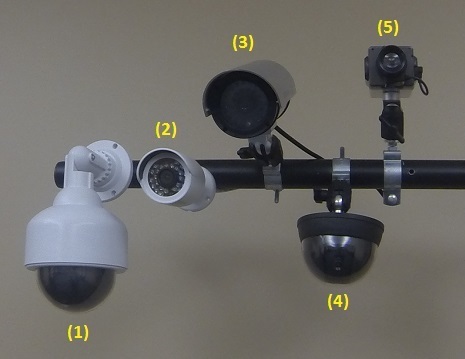 All of the dummy cameras used in this test were below $20, with most below $10. However, quality did not necessarily follow price. For example, two of the most believable cameras in our test were also lowest price:

By contrast, the most expensive model was the "wireless" motorized brick camera ($16.81), which we found less believable due to its small size relative to real cameras, and lack of power cabling.

Generally speaking, we do not recommend the use of dummy cameras, as their deterrent value is questionable.

However, if users do plan to install dummy cameras, there are three key recommendations:

Below are our physical overview videos. We have broken them up by form factor to help alleviate the length of the overall videos and see the specific strengths and weaknesses of each.

Below are image comparisons of the dummy cameras against real cameras. The images below are first shown without labels so users can guess which are real. Mouseover each image to see labels. 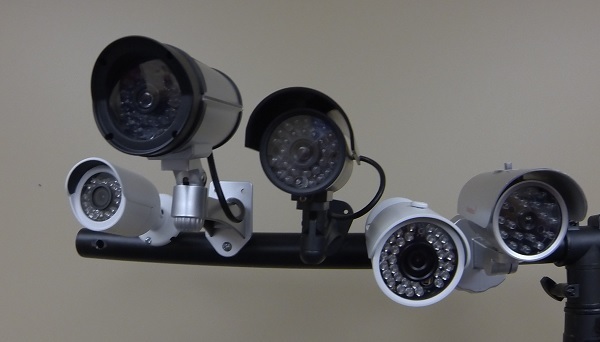 Dummy IR bullet cameras were the most believable of all form factors. The biggest difference between real and dummy bullet cameras was the arrangement of IR LEDs and the separation (or lack thereof) of the lens from the outer window. 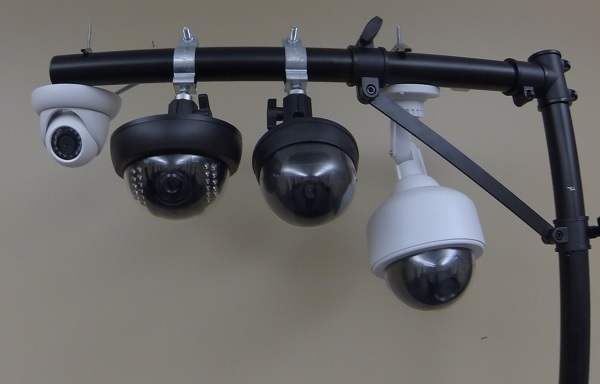 The weakest dummy cameras are the box cameras, primarily due to their substantially smaller size. Both of these models also had clearly marked battery doors on the top of the camera, not found on real cameras. The box dummy in the middle of the image has no cable running from it, labeled as "wireless", making subjects curious as to how it's being powered. The cameras ont he right is made from a very cheap plastic and resembles a toy more than a camera.

Below is a short video demonstrating the box dummy cameras on patrol. The activation range is ~5ft with quick or rapid motion, and when lighting changes from dark to bright quickly. When activated, the cameras pan back and forth, making a loud, annoying noise. Notably, real pan/tilt mounts are considerably larger than the mounts included with these cameras.

Dummy California Train System Caught With Dummy Cams on Jan 14, 2016
Who uses dummy cameras? Evidently, the fifth busiest train system in the US,...

"The housing of the dummy dome on the right was quite convincing, but its articulated gooseneck has no way to route cables, which may not fool some users."

I have a functional PTZ with that exact same gooseneck, which does in fact have a cable running through it.

How the heck do they get it through the joint in the middle? Interesting point!

Dummy Camera Shootout - I thought you guys were kidding?????

Which one gives the best image? :)

Can I get one with a warranty? Should I step up to IP housing or stay with older technology analog housings?

Seriously, no one with an in-house counsel or any access to knowledgeable legal advice would EVER hang a dummy camera.

We hear this a lot, but we've heard absolutely no verifiable claims of dummy cameras truly creating liability. The Rape Under A Dummy Camera story is most common, and it's based on a lawyer's speculation, not an actual case.

I know someone who got sued over a "dummy" camera, but then it turned out it was a fake summons to a non-existent court. ;)

Was it because an aggressive mime was lassoing innocent bystanders with an imaginary rope?

For those interested, as of right now, nearly half (~49%) of respondents can't spot the real camera in the image at the top of the post. And the UniquExceptional (top seller on Amazon) is indeed fooling more people than the others.

For a while, I've also been against dummy cameras. However:

No difference between the real and the fake in those examples Michael, but I don't think anyone's goal for their CCTV system is covered under those points. It is kind of like saying there is no difference between a Ford Focus out of gas and a Maserati Granturismo with no gas because neither one gets you where you need to go. I make sure my cameras point and cover what I want them to and that they are up and running so our cameras frequently cover the action desired.

I save and clean up some of the cameras and lenses that have to be replaced to use for this sort of application. If you wire them up as if they were going to work (power and signal) and terminate the ends that should go back to the recorder/power supply in an electrical box or into the ceiling or wall the illusion is pretty convincing. They look like real working cameras for even less than new dummy cameras.

We certainly avoid them because one of the techniques we use to help protect our own staff from claims of abuse or bad behaviour when dealing with a grumpy passenger is to deal with them under a camera. A dummy camera may help de-escalate situations but in practice, the best form of defence against vexatious claimants is to have vision. Dummy cameras alas, don't provide vision (I should know, I've been in the business several months now). 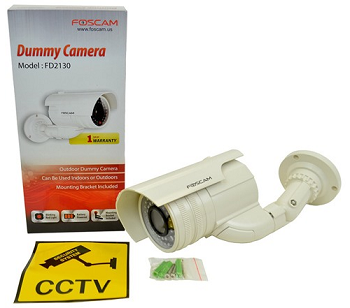 I thought all Foscam cameras were dummies, or at least for dummies :)

Foscam is really at the bottom of the barrel, but I did not know they literally manufactured dummy cameras. That said, it looks pretty realistic, and since many people know the Foscam brand, it might have more of a deterrent effect.

so, I can see which most people chose as the real camera but which one is the real thing?

HDcctv Alliance has just awarded the UDC4silver the first full compliance certification of its ver2 spec! Stating that all features of the UDC4silver are fully supported and at the same TCO as IP...

Half seriously tho, maybe John can spare one to send over there for compliance testing, to see what they do with it...

Theives cover up dummy camera while real camera records everything: