With many US cities reducing police forces, neighborhoods are left to fill in the gaps. As surveillance technology advances, and with increased pressures, more neighborhoods are looking at deploying their own surveillance systems. However, this can be especially difficult due to unexpected problems and limited funding. In this note, we review the most common places cameras are deployed, the most significant problems these systems face and the most typical means to get funding for these systems.

Where to Deploy Cameras

In general, cameras are most likely to be hung in areas that have the most communal use. Many residential associations jointly fund and maintain amenities like pools, gyms, parks, and gardens. Because these areas attract vandalism and misuse, communities often justify surveillance cameras in these areas for vigilant monitoring. The image below depicts a camera view of a neighboorhood association's private pool: 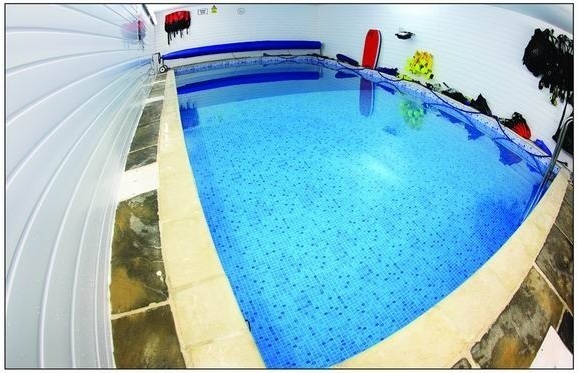 Main neighborhood entrance roads or major intersections are common deployment areas, with an emphasis on recording / capturing the license plate of vehicles entering and tracking where vehicles go. For gated communities, surveillance cameras are often integrated into gate controllers or intercom systems for the purpose of visually logging entry. The image below depicts a typical example of how video is deployed at main road entry gates:

Often, neighborhoods face common problems when deploying and operating cameras, including the following:

Networking: Only the smallest fraction of neighborhoods are developed with video networks in mind. Prewired systems are practically nonexistent. Often times, the customer expects that 'wi-fi' cameras are the easy solution, and they are surprised to learn the costs involved of developing any sort of infrastructure. Due to utility easements and land ownership, practical methods of running cabling like trenching and stringing cable between poles can be challenging obstacles to address.

When designing the network behind cameras, working with the customer to clearly establish the need for quality network utility is critical. Many end users assume that a scaled expansion of cheap residential routers is all that is required. While many end users are surprised at 'unexpected' cost of cabling or wireless equipment, a common strategy of integrators is to work with 3rd party vendors or volunteers from the neighborhood to reduce cost. Many end users will be more willing to 'do it right' if they are also able to mitigate the cost by furnishing their own equipment or installation labor.

Camera Vandalism/Tampering: Another 'universal' attribute of neighborhood surveillance equipment is how frequently they are targets of malicious activity. While these activities are seldom criminal, neighborhoods are filled with children and teenagers that serve as 'enemies within'. Bouncing balls, thrown rocks, and spray paint all are common sources of tampering. In addition, if a camera presents an obvious target it will attract unwelcome attention. As a result, dome cameras are less vulnerable to tampering than 'tradition' box or bullet cameras.

Landscaping: Many end users underestimate the role changing landscaping can play in video surveillance. For example, a neighborhood tree planting project can significantly affect the usability of an installed system. Before submitting a proposal, a 'complete' site survey that addresses camera FoV changes over seasons should be performed. In addition, coordianting new neighborhood planting work is imperative to ensure video surveillance functionality is not inadvertently reduced. The image below depicts the unanticipated impact of tree planting on neighborhood surveillance: 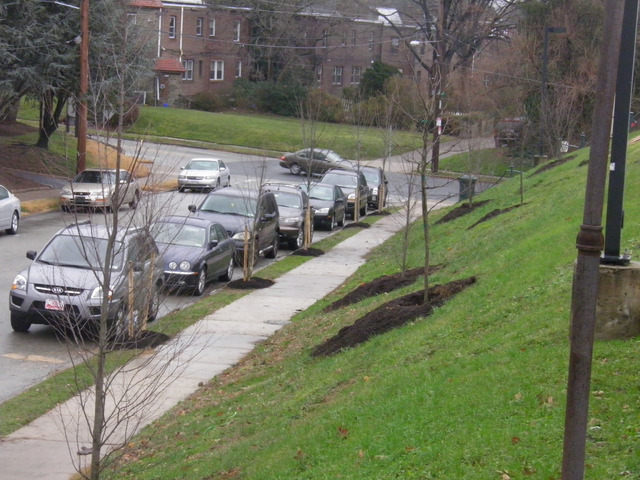 Privacy Concerns: Aside from simple design problems, among the critical "people factor" issues to answer upfront are:

No standard answers exist for these questions, but they should be addressed up front so the neighborhood customer has time to administratively coordinate new procedures and identify volunteers. Having the answers documented and camera views defined can go a long way in mitigating future legal issues.

Money is generally the single biggest constraint for neighborhood surveillance systems. Even when neighborhood members agree on the value of the system, sharing the cost of implementation is a sticky issue. The lead time in selling this type of system can span years and the 'point of contact' appointed to procure the system can change several times. Everyone in the sales cycle should anticipate a phased purchase and a committment of several years.

A common strategy of neighborhood associations to fund video surveillance projects are to amend 'membership dues' to include a monthly fee to support installation and maintenance projects. The installer may find opportunity to position 'lease agreements' as a purchase option to neighborhood customers.