In March, a man was shot and killed within view of a surveillance camera in a Miami public housing community. It was not until police tried to pull video that they learned the camera was not working. The wiring had been ripped out. 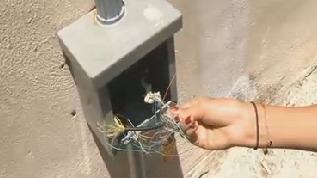 (Screenshot of the destroyed wires from a CBS Miami broadcast.)

It is not clear how much the city knew about the status of the system in Arthur Mays Villas, but the less than two-year-old installation had been problematic for some time, according to the Miami Herald [link no longer available]. The paper says cameras were often vandalized or moved to point in different directions.

The $118,000, 22-camera system came with a year of maintenance and support, which had expired more than a year before the murder (see the full contract executed May 2011). We could not find any evidence or documentation that the support had been extended.

The system included 19 analog cameras with lenses and enclosures at ~$620 per camera and six IndigoVision encoders for ~$810 per camera.

An excerpt from the contract shows the camera and encoder pricing:

Neither Miami Public Housing and Community Development, the agency responsible for the system nor the integrator, Aware Digital, returned our phone calls or emails, leaving many questions about the dysfunctional system unanswered. Why were the cameras not serviced in a timely manner and what is the status of the cameras now?

However, after the family of the shooting victim said it planned to file a lawsuit against the city and Aware Digital, the housing authority released a statement [link no longer available] saying, "We are currently in the process to award a contract for the repair, upgrade and service of the cameras."

It seems that the city should be more concerned about the functionality of a system in an area designated by police as one of the highest crime areas in Miami, where three murders took place in the preceding five months. By letting broken cameras continue in an area where they would certainly be of value and by failing to disclose if the problem had been fixed, it is clear that the City of Miami and the Public Housing and Community Development feel they do not have to answer to the public in this case (We have requested copies of all audits, maintenance and repair records and incident reports related to the system).

Without knowing the extent of the vandalism, it seems some of the problems mentioned in the Herald story could have been avoided with the most basic step: Mounting cameras and boxes higher to make it more difficult to change their direction or pull out wires.

The specified products did not help. Spending an average of $1400+ per fixed camera for new analog cameras and encoders is highly questionable, considering top of the line HD camera can be had (even in 2011) for significantly less than that. Plus, the money saved could be used for maintenance.

It should not take a murder and a lawsuit for an end user to find out their system is not working and do something about it. For more on maintenance, see our service contract / maintenance contracts guide.