Philadelphia's surveillance system is a huge mess. The last we checked, they were paying $136,000 per operational camera, with most cameras broken. Now, a new audit has been released, with more grim details, followed by more debate amongst city officials. In this note, we break down the four main issues we found from interviewing Philadelphia officials and reviewing the final report:

There is significant disagreement between the four parties that are tracking the health of the system:

The chart below shows comparisons from RTCC weekly reports to what was observed by auditors (EA Observation) to what OIT reported one week after the audit.

The audit gives this reason for such differences in reporting:

“While a camera may be up at the time the working status is recorded in the spreadsheet in the morning, it could be down in the afternoon, and vice versa. It is believed that this is most frequently due to weather conditions (e.g., wind, rain, etc.) or type of cabling ... Additionally, since 28 days of data from each camera is stored and available for review, while a camera may not be working today, there is a possibility that video images from that camera may be available from sometime during the previous 28 days.”

Here's the breakdown of what the audit found:

For example, one camera randomly selected for testing produced clear images the first time, but the PTZ function did not work. Two weeks later the same camera produced blurry, images, according to the report. Many of the cameras sampled had some kind of condensation or standing water inside their domes. This and other still unknown reasons, made it “difficult to discern facial features, logos on clothing and vehicles, and other identifiable details.”

The auditors believe bit rate settings contribute to the poor image quality as well, saying the “bit rate was not high enough to pick up the data; possibly due to either low bandwidth or the cameras’ compression setting. The most significant shortcoming noted when viewing historical video was the unreadable or pixelated images that resulted when the camera was zoomed onto a license plate.” IPVM suspects this might be related to Timesight's periodic video re-compression to reduce storage consumption.

Poor to No Maintenance

The media director for the controller’s office, Brian Dries, explained why the system still is not up to par after having a year to make corrections:

“I think it’s a combination of things. It’s the lack of a maintenance program and the condition of the cameras. We did a comparison to Baltimore [see image below]. In Baltimore if there’s an issue, it takes 24 hours [to fix]. If there’s an issue in Philadelphia it takes up to five weeks to fix." 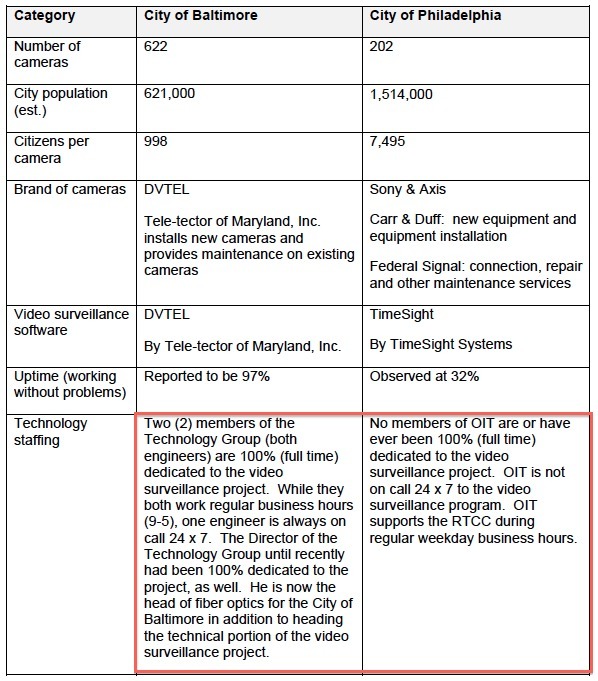 Cameras are in Disarray and Disrepair

"The actual condition of the cameras is a problem too," Dries said. "Thirty-two percent of them could be used, the rest of it is useless. There’s water in the camera domes, and with the image quality you can’t even identify any objects or people or read license plates.”

It is not raining in either of these images. The domes are full of water:

One part of the audit noted that cameras were pointed in directions blocked by trees or buildings. This camera is blocked by both: 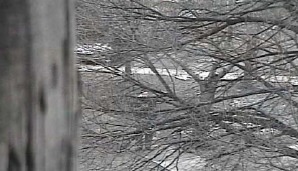 And in these these images it is impossible to distinguish license plates at this intersection and in this parking lot:

Note: All images included in the report include the full field of view. Images that are zoomed were optically zoomed.

The system uses Sony and Axis Cameras and TimeSight VMS. We previously requested the RFP and the original contract [link no longer available] for the project, but until we can see the final scope of work, much of the details of the original contract come from a Unisys press release from 2007. The contract was for $8.9 million and included installation of 250 cameras with an option to deploy an additional 250. The wireless network was noted as a problem in the last audit, but we still do not know what type they were using. This audit does say cabling is currently being replaced with fiber optics.

The RFP for the project lists capabilities the city wants the system to have, but is lacking on details. The city wanted a surveillance system that was scalable up to 1,000 cameras, starting with 250 IP cameras. It also wanted a minimum of a year of maintenance and video streaming and storage for a minimum of 30 days. Ironically, the 2007 RFP says the system must have an alarm that notifies administrators if any parts of the system are not working. It seems that capability either did not make it into the system or that the alarm must constantly be going off. Below is what the "Detailed Project Requirements" section looks like (full RFP here): 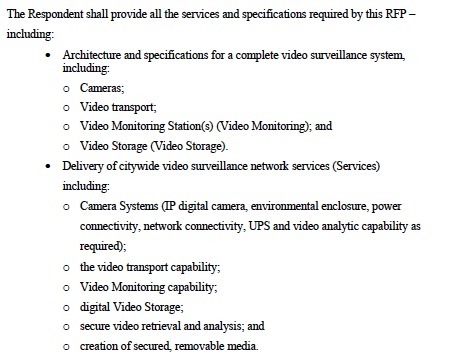 The city's plan to fix the problems is not clear, and the Office of Infomation and Technology cancelled scheduled interviews with IPVM. In the audit there was no mention of adding staff or a maintenance program, but there was mention of integrating a PSIM.

We noted our last report that TimeSight, the brand of VMS used by Philadelphia ceased operations in 2012. Now Philadelphia hopes to interface a Wisdom Command and Control [link no longer available] (PSIM) setup with TimeSight to produce "more enhanced images." The RTCC says it is waiting “until an update to the TimeSight software is made available” that will allow them to control the cameras using Wisdom.

Given TimeSight's demise, it could be difficult to integrate the two. Moreover, even if delivered, we do not see any way that any PSIM could 'enhance' the images coming from a third party recorder.

Obviously, paying for dedicated maintenance will help but the problems are most likely deeper. The heart of their system is a VMS from an out of business manufacturer plus they appear to have ongoing issues with their networking / transmission infrastructure. Moreover, they have internal political issues. We are not optimistic about the system's future without massive changes.

Indeed, this year, Philadelphia has rolled out a new program that subsidizes private businesses to install surveillance cameras. Unfortunately, that approach has major limitations as well.