Surveillance cameras in bathrooms? Hard to believe. In city bathrooms? Even harder. Bought by the city itself? Almost impossible.

Nonetheless, more than a dozen secret surveillance camera have been used in public bathrooms, according to an investigation conducted by a former firefighter in Michigan. In this note, we explain the case, how the firefighter built it and the legal / privacy implications of this fiasco.

Last week, Ludington resident Tom Rotta was the first to speak at city council meeting. He started with a damning accusation that bathrooms in at Ludington parks had been under surveillance by the city for years. Rotta says he found 14 cameras, 12 of them hidden in bathrooms in several Ludington parks, telling the council:

“When one steps up to a urinal, or one sits on a toilet, he expects to do so with privacy, and should not be able to look up and see a recording camera pointed at his private parts."

The cameras were found in vents overlooking men and women's the bathrooms. “Smoke detector cameras” were placed above stalls [link no longer available] in some. Rotta, a former Ludington firefighter, verified through city blueprints that there were no electrical connections in the bathrooms that would enable installing an actual smoke detector.

Before he could present the most damning evidence, city council told him that his time was up (video of the meeting here), so he posted all of his findings to a local discussion board. Two of the photos he provided to Ludington City Council below: 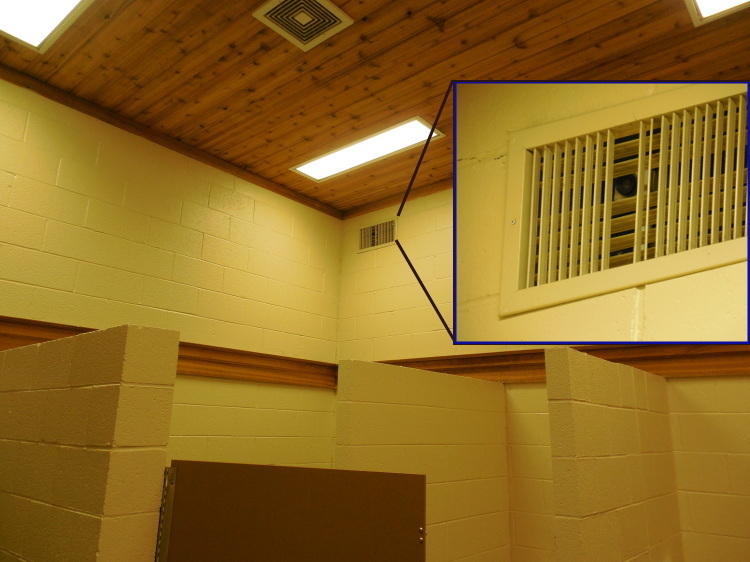 The City Bought the Cameras

What Rotta was getting to was a receipt from the city's own records that confirmed it bought some of the cameras. Rotta sent a public records request asking for invoices for surveillance equipment at Waterfront Park (Rotta has sued the city at least three times [link no longer available] for interfering with the public records process). What he received showed that back in 2000, the city purchased two "color smoke detector cameras," two surveillance cameras, a time-lapse VCR and two dummy cameras. See the complete invoice below: 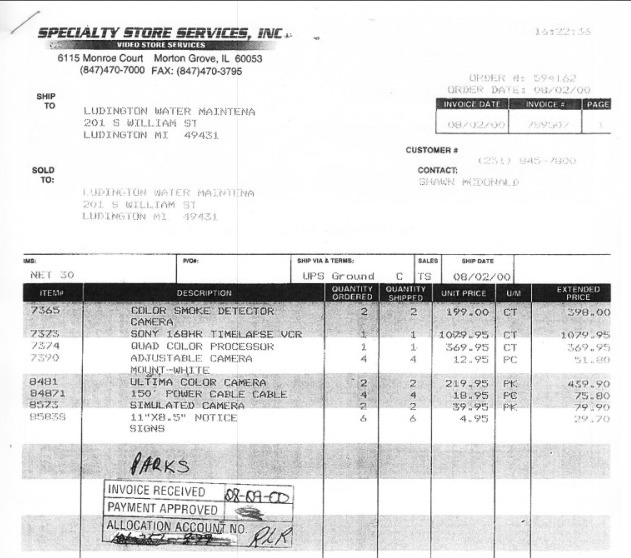 City manager John Shay told a local newspaper that the cameras are placed to prevent crime and only point to “common areas” of the bathroom. Bathroom footage has only been reviewed twice since 2001, he said. He also confirmed that some of the cameras were dummy cameras (also on the invoice).

Despite the invoice showing the city’s purchase of smoke detector cameras, Shay says the smoke detectors cameras in the bathroom weren’t cameras at all, but humidity detectors.

The city attorney further argues that the Michigan Supreme Court has made three rulings that cameras can be present in the common areas of a bathroom, but not the stalls. Neither the attorney, city manager or newspaper cited those cases.

A receptionist said Shay was fielding the calls related to the cameras, but he did not return any calls or emails from IPVM, nor did city attorney Richard Wilson.

What The Law Says

I have not yet found the specific cases the city attorney was referring to, but Michigan state laws, like many others, prohibit video surveillance in areas where people have a reasonable expectation of privacy. Michigan’s surveillance law specifically prohibits photographing and recording images of “the undergarments worn by another individual, the unclad genitalia or buttocks of another individual, or the unclad breasts of a female individual under circumstances in which the individual would have a reasonable expectation of privacy.” I am interested to know what areas of a public bathroom the city considers common areas.

The general public is already on edge about increased surveillance, but cameras in public bathrooms are especially taboo (one judge even ruled that cameras in detention center bathrooms were inappropriate). Rotta, showed through public records that not only did the city purchase the cameras, but it had them placed in areas where people usually have an expectation of privacy.

As it stands, it seems the city has no plans to stop recording people in public restrooms. If this case goes to court, I don't know if two incidents in 13 years are going to be enough reason for a judge to let hem keep them on.