Sex offenders were being monitored inside bathrooms by surveillance cameras. The facility was concerned that patients had been attacking each other and wanted to stop this. However, some patients complained and took the facility to court. Now, an appeals court has affirmed a ruling (see full legal document) that ordered this facility to turn off those cameras and the facility has settled. In this note, we break down the legal and operational issues, concluding with an analysis of what this means.

The Commitment Unit for Sexual Offenders [link no longer available] is an Iowa long-term care facility for those who have completed their prison time, but the state has determined are likely to reoffend. According to The Chronicle Times, the CCUSO turned off cameras as part of a settlement with three residents who asked a court to force the facility to turn them off. The settlement came shortly after an appeals court determined that cameras in bathrooms were a violation of residents’ privacy.

The facility had cameras in bathrooms since 2009. The first cameras went online after one patient attacked another in a bathroom and a separate incident where a patient “with a communicable disease” had sex with another patient without disclosing “his health status.”

CCUSO considered adding locks to bathroom doors but wanted to keep residents from locking themselves inside and to reduce delay in case of an emergency. It put up cameras instead. The cameras were “masked” to keep viewers from seeing “private areas of the body,” and footage was stored for 21 days. Operators did not have the permission to “unmask” the images.

Here is a diagram created by the plaintiffs of the camera locations in one of the bathrooms: 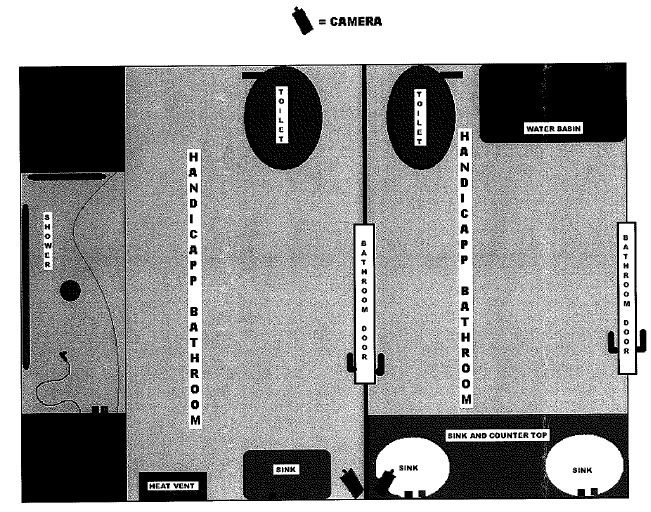 Three residents of the facility asked a court for an injunction that would bar the facility from having cameras in its bathrooms (full complaint here). The residents argued that it violated their privacy and interfered with their treatment by subjecting them to humiliation that reminded them of past abuse.

In April 2012, a judge granted a preliminary injunction saying the cameras could stay on while the case made its way through the courts, but barred anyone from monitoring or viewing footage without a court order.

The very next month, the facility filed a request to view video from its system and found that two people had gone into a the bathroom together. One said later that a sexual assault had occurred.

Even so, a judge granted an injunction barring the facility from operating cameras in the single-person bathrooms, but not dorm-style bathrooms.

The facility said it wanted cameras to prevent future assaults and the court agreed that cameras could work as a deterrent. However, because they did not have any kind of alerts and were not monitored live, they would not be of any use except for after an assault happened, the court said:

"Although unmonitored cameras may sometimes deter illicit behavior and help with investigations, they do not provide the administrators with immediate alerts concerning patient safety or directly prevent assaults or dangerous acts. They are instead an after-the-fact investigative tool: By the time the video is viewed, the harm has already happened."

The appeals court said for these reasons mentioned above, if the case went further, the facility was likely to lose which would mean a shutdown of all of the cameras.

The facility settled the case with the residents on May 14, 2013. In the settlement it agreed to remove all of the cameras and to pay all of the residents’ legal fees ($22,000).

UPDATE: Iowa Department of Human Services spokesperson Roger Munns has confirmed the cameras are no longer in use and released the following statement: "The Iowa Department of Human Services has no comment on the court settlement. The Civil Commitment Unit for Sexual Offenders no longer uses monitoring cameras in bathrooms at the facility. A separate monitoring procedure has been put in place to protect patients."

Munns says he is not at liberty to say what the new procedure is because he "cannot disclose internal procedures of a secure facility."

In this case, the court noted that the cameras did not serve a purpose in preventing violence because they did not have a way to alert facility administrators and were not monitored, however it did not say whether adding alerts or live monitoring would have changed the outcome.

Nationally, legislation is mixed on whether having a camera in a private place constitutes a privacy violation. Some factors that can impact this are whether the camera is monitored and the purpose of the camera. There are only 13 states [link no longer available] that ban cameras in private places like bathrooms and dressing rooms. However, many other states have other surveillance-related laws that would apply. Cameras in places where there is an expectation of privacy are at the least socially unacceptable [link no longer available]. In the United Kingdom however, the practice seems to be more tolerated. According to CCTV data obtained by Big Brother Watch, the islands have more than 825 cameras in school bathrooms and changing rooms alone.

This court did leave open the possibility of allowing cameras in bathroom but they would have to show that they directly and significantly reduced the problem at hand. Short of that, this shows the privacy even of convicted sex offenders will be protected.