In the past month, the so called 'bug eye' camera has captured popular attention around the world, from Nature Magazine, to CNN, to the BBC, and dozens more. A research team at the University of Illinois-Urbana Champaign has developed a camera that can replicate insects’ eyes using hundreds of tiny lenses that they hope can be used in surveillance applications. However, what potential does this have for surveillance?

For this note, we spoke with Professor John A. Rogers, at University of Illinois at Urbana-Champaign, who led the project, about the application to surveillance.

The camera uses an array of miniature focusing lenses and detectors to see extreme wide angles of view, with high sensitivity to motion and infinite depth of field. From their research paper, an image:

From a press release [link no longer available] announcing the technology:

“Each microlens produces a small image of an object with a form dictated by the parameters of the lens and the viewing angle. An individual detector responds only if a portion of the image formed by the associated microlens overlaps the active area. The detectors stimulated in this way produce a sampled image of the object that can then be reconstructed using models of the optics.”

Researchers say the critical feature of the technology is its hemispherical design. They believe that a full 180 degree picture with no aberrations “can only be accomplished with image sensors that adopt hemispherical layouts, much different than the planar CCD chips found in commercial cameras."

Rogers says the camera’s main disadvantage is resolution. It is “about the same as a fire ant or a bark beetle,” he said. “We think that we can scale to many more lenses than in our current devices.” As the number microlenses on the eye increases, so should the image quality, according to researchers. The current version has 256 microlenses in a 16 by 16 configuration.

He provided the following diagrams: 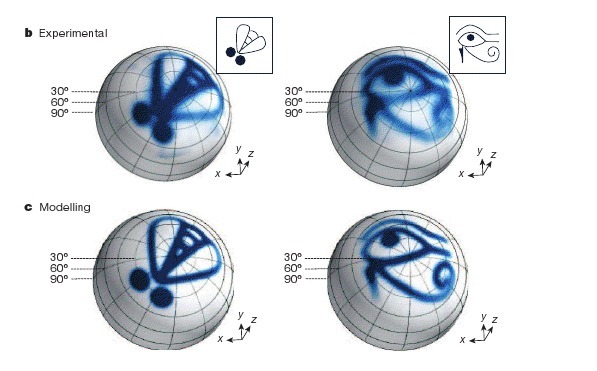 The images on top are actual images from the camera overlaid on a spherical diagram. The images on bottom are the first resolution goals of the camera.

The professor says the two industries that could likely benefit from this technology are endoscopy and surveillance.

“We think that the ability of the camera to look in all directions, equally well, at once could be useful. This feature, taken together with an ability to focus simultaneously on objects in the near and far fields, is important for certain envisioned applications in surveillance,” he said. What will make this competitive in surveillance markets, Rogers says, is the ability to have "absolutely no distortions or illumination non-uniformities, all the way out to the very peripheral parts of the field of view."

Scientists at the Max-Planck-Institute in Germany say the technology could have potential in disaster relief operations, helping small vehicles or robots navigate through dangerous areas, “while using other sensors to detect trapped people.”

Rogers is looking for a company that can help turn the idea into a commercial product. He is in discussions with several now, but he declined to estimate when the camera would be commercially available or the cost.

Bugs may have a wider FoV than humans but evidently with dramatically lower detail. Until and unless the resolution radically improves, we do not see this as viable for surveillance. There is a wide array of relatively low cost, small form factor fisheye panoramic cameras on the market and though they certainly are not perfect, they are many years ahead of the bug eye technology. Even if this project can improve, the core advantage of infinite depth of field is not a major practical concern for most surveillance applications as subject are typically not very close to the camera.

We suspect in areas like medicine where small form factor and close objects are critical concerns, this technology is far more likely to be viable.