The perfect spot for installing a camera may be infeasible or impossible to install. Lots of logistical challenges force cameras to be mounted in less than ideal conditions. In this note, we review the most common issues including:

Not every camera can be mounted flush to ceilings or walls with elbow brackets. Due to architectural features like high ceilings, HVAC ductwork, and load bearing columns, specialized brackets are sometimes required to put cameras in optimal surveillance position. In other cases, cameras need to be located on poles to provide them proper height for use.

High Ceilings: Putting cameras at the right distance from the target scene is critical, but ceiling height is often at odds with this concept. In order to suspend cameras from great distances, pole pendant mounts are commonly used. The image below shows pendant mounts from cameras and public view monitors, as used by a large 'big box' retailer in the USA: 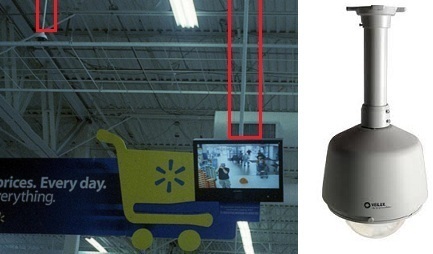 Pole Mounts: In order to break cameras free of obstructions or mount them high enough to be useful, they are commonly installed on poles. While a familiar sight, special considerations go into installing cameras on poles - a topic that we covered in several reports, including our "Pole Mounting Primer" and "Pole Selection Guide". 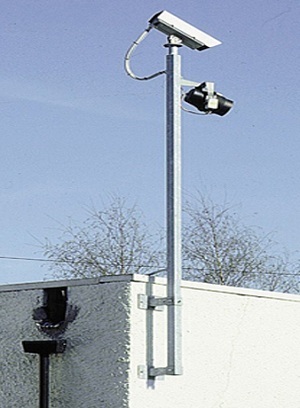 Tripod Mount: Planning cameras for roof installations are frequently a challenge. Anchoring standard camera mounts to roofs require holes to be drilled into decking - an activity that typically voids roof warranties and can lead to leaks. For these applications, 'tripod' mounts are used to secure the camera without damaging the roof. Notice the type depicted below is 'tied down' with guy wires through eyelets installed in existing deck bolts: 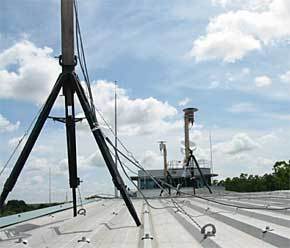 Solid Concrete Walls: A common type of commercial construction makes use of poured concrete 'tilt-up' panels. While this form of construction is valued for being inexpensive and durable, it does not permit in-wall cabling. Concrete 'tilt-up' structures are a problem because they are constructed of solid concrete - while mounting cameras to the outside face is not a problem, boring channels inside the wall for cabling is impossible. Unless channels are planned and formed at the time of pour, running power and data to cameras can prove to be difficult. In the absense of cable channels, cabling must be run external to the wall through conduit or other external pathways. 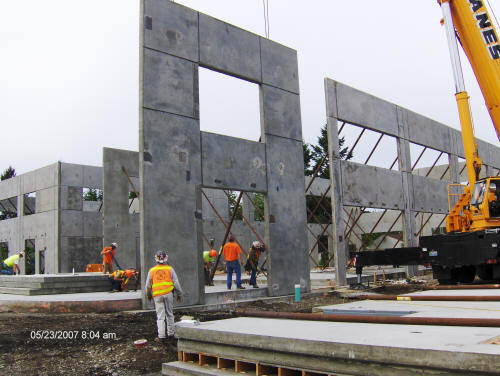 EIFS/Stucco: Other materials, like EIFS (commonly called Dryvit) and plaster Stucco finishes do not provide a load-bearing, secure surface for placing cameras. While weather resistant and durable to the elements, it is a very brittle substrate with little tensile strength. Unless backer boards can be installed before the finish is applied (or reinforcement boards installed afterward), cameras cannot be successfully anchored to EIFS. Given the widespread use in commercial construction, it presents a common issue when planning camera locations. 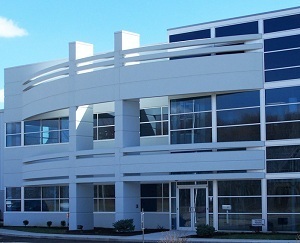 Plaster/Lath Walls: Before the widespread use of modern 'drywall' gypsum paneling, interior walls were finished with a thin plaster coat over a sublayer of wood strips called 'lath'. This type of construction is notoriously brittle even when new, and given its appearance in older buildings, simply drilling mounting holes or fishing cable can cause extensive damage over a large area. Many installers choose to avoid installing cameras in this type of wall construction, while others price the work at higher rates than drywall work. Notice the small bullet camera mounted on the ceiling, and the adjacent damaged area in the image below: 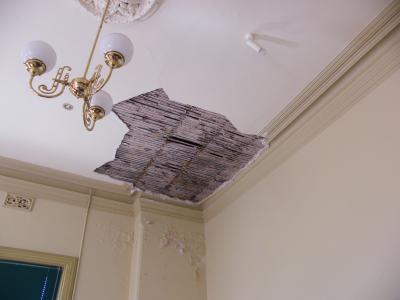 Even before looking at a set of blueprints or doing a site walk, overarching code restrictions may exist that influence camera location by default. Especially when performing work on old buildings or special occupancy types, the designer should confirm that no codes or laws restrict locating surveillance cameras.

Historical Buildings: Structures deemed historically significant are often protected against modifications [link no longer available] that change the building's appearance in any way. Even normally 'discrete' surveillance systems may not be approved and alternative mounting locations and equipment may be required. The designer should be aware of any historically significant (even informal sentiment) spaces when assigning camera locations. 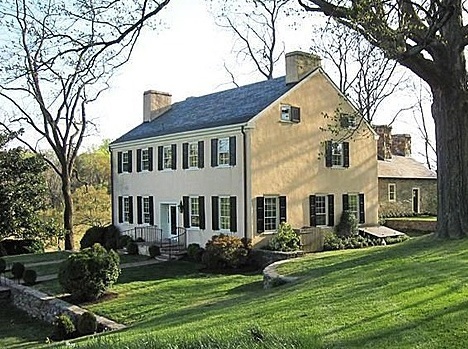 Hazardous Areas: In addition to general codes, the designer should take heed of nearby 'Hazardous Area' designations. Cameras must be enclosed in special housings, and wiring must be run according to specific requirements. Even if cameras are not to be immediately located in such areas, when cabling or conduit must passes through these zones it must meet code requirements. For addition details on mounting cameras in Hazardous Locations, see our report. 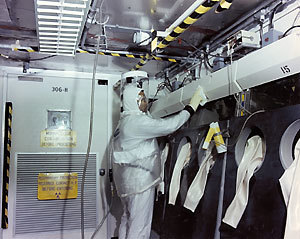 Firewalls: One of the most common 'code restrictions' that installers face is passing cabling through fire rated walls. When this type of work is required, approved penetration materials must be specified and installed properly [link no longer available] in order for a firewall to retain its rating. 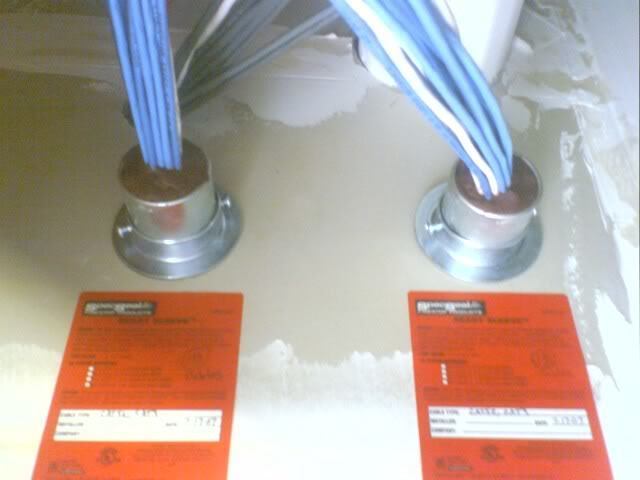 Ambiance and Architecture: Some facilities (or portions of a facility) may be designed specifically with artistic or architectural expression in mind. In these cases, locating surveillance equipment may be visually disruptive. As a result, cameras might be mounted in less than ideal positions or selected based on appearance rather than strictly performance. Aside from hanging housings, objects like conduit or illuminators may be subject to aesthetic scrutiny, and traditional installation methods may need to be adjusted. 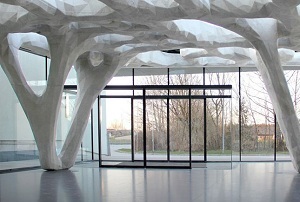 Glass Atriums: Lighting, either too much or too little, is a traditional source of issues with surveillance systems. While features like Day/Night and WDR are designed into cameras to mitigate issues, the appreciable effect of these features greatly varies between camera models.

In other cases, like surveillance in highly glazed entries or atriums, the impact of lighting contrast can be so significant that even the best WDR features have problems normalizing images. In these situations, the problem can be best addressed by avoiding it with smart camera placement. 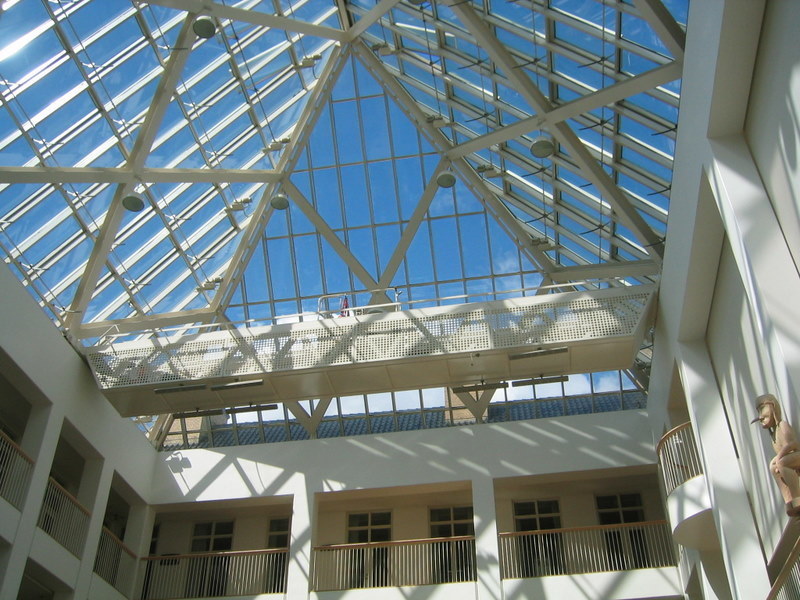 High Humidity: Certain environments are prone to fog and high moisture levels. Surprisingly, interior areas can also be prone to humidity problems, especially industrial environments or swimming pools. Even when cameras are equipped with blowers, wipers, or anti-fog coatings, visibility of the camera can be impacted by moisture-laden air. The phenomenon of small 'fog patches' can be noticed surrounding hot air exhausts or facility entrances. Taking note of proposed camera locations in relation to these sources may influence camera placement. If an certain location has a history of fog, then more than the typical number of cameras may need to be planned to account for reduced visibility. 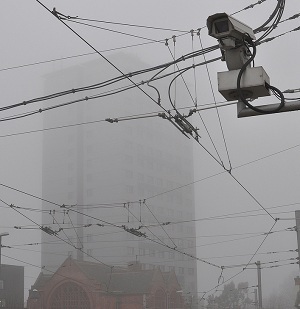 Vapor/Smoke Plumes: In addition to humidity/fog, the location of cameras around exhaust vents, smoke stacks, or industrial machinery can be a problem. Even if the camera is not mounted adjacent to the source, windblown steam and smoke can create maddening, erratic problems for surveillance systems. Taking note of nearby emissions, and how the plume may impact visibility, is a critical part of determining camera location. 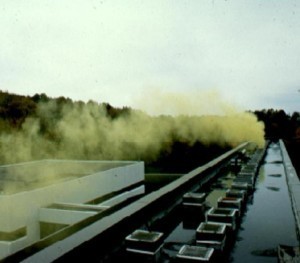 Finally, when planning camera locations, the designer should take note of a few basic requirements of EVERY camera location: the need to run power/data cables to the camera. Even when aesthetics are not an issue, the ability to run conduit through walls or ceilings can vary widely in a facility. As part of planning camera placement, the designer should think: "How is this camera going to be connected to power and the network?" and confirm a workable solution is available before committing to a certain spot. 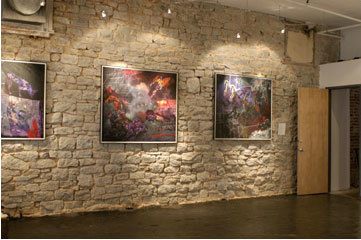