Mark already had cable from Comcast so when he started getting offers for their home security service, he was interested. He had recently moved into a new home and was about to leave on vacation for the first time after moving in. The family would be gone for a week, so he called Comcast and signed up. After having the two service for years, he says the system is easy to use, but he’s ready for a change. In an interview, he told us why. But first here's a rundown of Comcast's Xfinity Home Security Service:

With 21.6 million cable subscribers, Comcast is the largest “multisystem operator in the country”. IT's main revenue comes from cable, but it has expanded into Internet, and in recent years, home security services. The Comcast Xfinity Home Security [link no longer available]service has been around since 2010. Shortly after, Time Warner Cable and Verizon also launched similar services and Cox Communications added home monitoring last year.

Currently pricing on the website shows that for $40.00 per month (or less if it’s bundled with cable and internet service) and a three-year service agreement, a person gets a touch screen controller, three door sensors, a motion sensor, a wireless keypad, two cameras, two lighting controllers and a thermostat controller. Mark has all of these except the cameras. Customers can add additional parts from an equipment list [link no longer available]on the website.

Here are the cameras: 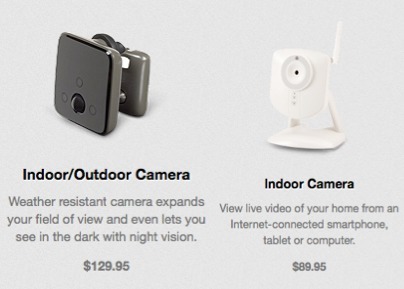 The system uses PIR sensors for motion detection. There is also the option for a targeted motion sensor that Comcast says can detect motion in specific entryways or windows. 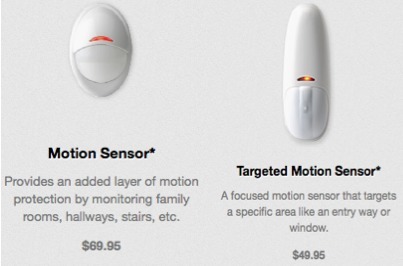 For Mark, the service was a good intro to home security systems, he says.

“I’ve had it for two years now and it if wasn’t for that contract, I probably would have cut this service a long time ago,” he said. He says he wouldn’t forego home security altogether, but would probably get it from an actual alarm system company instead of a cable company.

Installation and Ease of Use

Within days of calling, Comcast sent out a technician who did installation, setup and configuration in about an hour, he said. Customers do have the option of installing the system themselves.

The system was up and running before their vacation and the interface on the touch screen and the app are intuitive so he was able to learn how to use it and set alerts. The rules are easily customizable, he said. For example he once created a rule for the system to make sure the system armed 30 minutes after anyone leaves. Now they have it set to make sure it is armed at random times throughout the day. He says he likes being able to access the system from anywhere with the app.

The main Comcast Xfinity issues he identified were:

Comcast customers may sacrifice speed for security. Mark says one of the most annoying problems with the system is that it throttles a customer’s Internet speed.

Comcast doesn’t let the customers access any settings on this router so, Mark, a techie himself, says he found a workaround to get his full Internet speed by opening another port on the router. Unfortunately, this makes the router susceptible to hackers, he said.

“When you’re trying to deactivate an alarm or alert it’ll freeze, and we’ve had a series of false alarms because we were trying to input the code and the interface was frozen.

With this system you can expect some false alerts, he said. His pets still set off the motion alerts when no one is home, despite having techs come out three times to calibrate the system.

Even though Mark doesn’t have a camera as part of his plan, he’s familiar with that aspect of the system because his mother has the same plan plus two indoor and two outdoor cameras. The cameras can be watched lived or set to record on motion. It has a buffer that records five seconds before each event and 15 seconds after the event is over and sends the alerts to a subscriber’s phone and email.

But what most people don’t realize is that by default, the cameras don’t record or send alerts, Mark says. His mother found this out the hard way after her car was broken into one night. There were no recording rules defined for her cameras so there was no video of the crime.

“You have to define the alerts you want. Even if it’s motion, then you have to set that. You can set certain rules like when someone opens a door or to record any events that happen during certain times. If your house has alarms, but you don’t set the cameras to retain video along with them then you’re S.O.L.,” he said. Now he says the system is set to record any events that happen at night.

Subscribers can watch images live from the touch screen or the app at about 10fps. The quality is “good enough to make out what is going on and see faces pretty well but not enough to read license plates or anything like that,” he said.

Also, “You get a lot of latency watching it through the app, but it may be better from a PC,” he said. He previously worked in law enforcement and says the images from the camera are on par with what he’s seen from traditional home surveillance systems.

For each camera event, the system sends an mp4 file to the subscriber’s email.

Comcasts corporate response to Mark's system problems is to deny that any of these things are known issues.

"This is not a normal customer experience," a spokesman said by phone.

The spokesperson said that the company uses "pet approved" motion detectors that are made to "accommodate the fact that people have pets," but could not give a reason why Mark was still getting false alerts. He also said the siren on the tablet should be loud enough to hear throughout the house, the touch screen shouldn't freeze and that he's never heard of the home security router throttling Internet speeds.

"We need to send technicians out to do a deeper dive and fix and adjust these things," he said.