Make Your Own Cameras in Your Garage

[WARNING: Do not use this company. We strongly recommend against it.]

Yes, I am looking at you, trunkslammer, the next great American manufacturer.

One of the more peculiar exhibits at ISC West 2014 was this company: 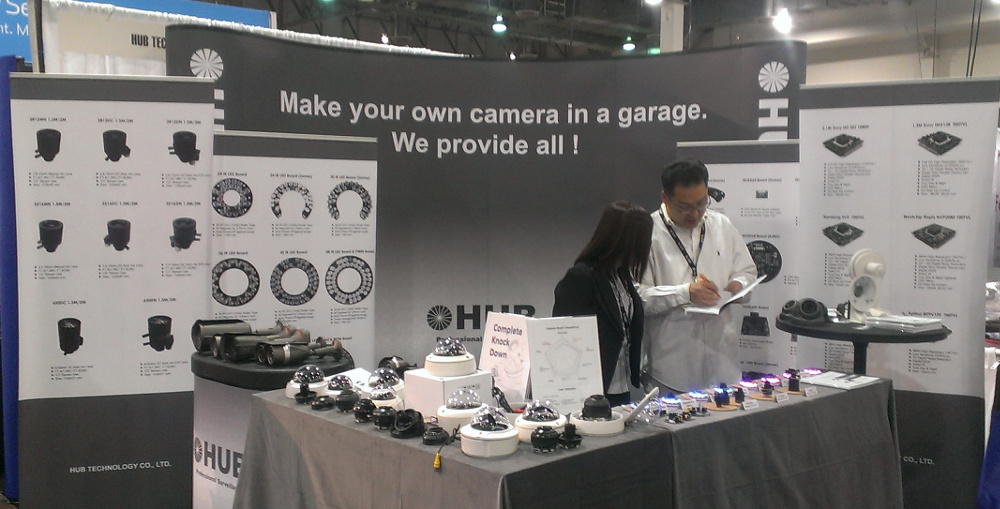 They claim to empower you to become your own camera manufacturer, making 20,000 cameras in your garage every month. We spoke with them to understand the details of the offerings, its pricing and competitive positioning.

The company, HUB Technology, provides all the parts required to build a camera, including sensor, lens, power supply boards, optional IR illuminators, and housings. Users select the imager of their choice, pair with a lens, add the proper power supply (models vary depending on whether IR and heater/blower are required), and select a housing. Components are connectorized, plug together, and are screwed into the housing to complete assembly.

This image shows the sensor options and lenses they had on display at ISC West, ranging from 650 to 900 TVL, from Sony, Samsung, Aptina, and more.

HUB cited cost to the user as $40-80 depending on options. A Sony Exmor imager board, for example sells for ~$16, while a lens is $10-15. Housings vary from a few dollars for indoor plastic versions to $20-30+ for outdoor bullet and dome models with built-in heaters.

Electronic components such as the imager and other boards are shipped via air from Korea, while housings and lenses, etc., are shipped via sea from China. Key components such as sensors and lenses have no minimum order. However, there is a 300 piece minimum for camera housings, meaning users should not expect to simply buy parts for one or two cameras.

All components carry a two-year warranty. If any individual component fails in the field it may be returned for replacement. This at least partly addresses one common concern with DIY gear, though the installer is still responsible for labor to replace and cost to ship defective components.

Currently, HUB offers analog camera components only. They say they have plans to move into build-your-own IP cameras, but it is not finalized.

According to HUB, using their products assures "Made in USA" labeling. However, we disagree. In order to be labeled as "Made in USA", the majority of components must be manufactured in the USA, instead of simply assembled. It is possible that cameras assembled from HUB components may qualify as "Assembled in USA", but even this is questionable as screwdriver assembly of foreign-manufacturered components typically does not meet these requirements.

Given that even 900 TVL analog cameras can be easily found for $75 online, with lower TVL models selling for $50 and less, purchasing components and performing assembly "in your garage" is of questionable value. Further, the minimum order requirements (300+) is a non-trivial commitment.