Aside from being functionally equivalent to mainstream Access Control offerings, Brivo claims its product has several advantages over traditional 'host bound' systems:

While not limited to a specific number of doors or locations, Brivo says their 'sweet spot' typically is multiple sites with less than 30 doors at each location. Brivo's primary product offering is named 'ACS', and several versions and add-on functionalities are available:

ACS5000 EDGE Controller: Brivo ACS works with a customized version of HID's EDGE controller. The Brivo EDGE unit suitable for remote administration and control of 1 door. The EDGE controller is suitable for standalone deployments, and is PoE powerable.

'IP Door Controller', or 'IPDC': The 'next generation' of door controller is the IPDC, with expanded capability of controlling up to 2 doors. Like its EDGE predecessor, the IPDC is PoE powerable. 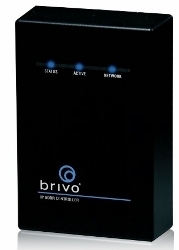 ACS5000: Brivo's primary panel, the ACS5000 is sold in a several versions preloaded with controller boards. UL listed and FIPS 140-2 versions are available, and regardless of initial configuration the basic chassis is expandable to control up to 30 readers per enclosure.

Readers: Compatible credential support is broadly based to include the following types:

Readers supporting these general format are compatible with Brivo and this list covers the majority of card credential formats used today.

Brivo reports cost targets of $500 per door (less labor and locking hardware) and $15 per month hosting service fee per door. However, pricing for discrete hardware and hosting services is not publicly available.

A cost/benefit analysis shows that for a 8 door access control system, Brivo has a lower cost of ownership until month 10 or 12. This estimate assumes that for an 8 door system, a traditional 'hardwire' system costs an additional $1200 in hardware upfront. The monthy 'hosting' fee for the same number of doors costs around $120 per month.

However, traditional systems will have their own upkeep/maintenance costs that need to be factored in as well. A traditional 'hardwired' access control system requires several components not required by a hosted Brivo system for operation. These elements include:

However, using Brivo requires the user to pay a recurring 'hosting' fee for each door, typically around $15 per month. This fee covers the cost of moving the same functions addressed by the 'Headend' panel to the cloud.

Other costs associated with Brivo are local internet connection and general network administration, however most enterprises view these as general overhead costs, since they already apply to general commercial computer networks.

Acquisition costs aside, a Brivo system provides an access control system whose 'headend' is web accessible, decentralized, backed up, and maintained with a high system 'uptime' in a professional datacenter. However, these benefits can be obtained when using a 'hardwired' system with additional costs and configuration.

The most economical choice between the two options will depend upon the IT strengths and resources of individual end users. If a customer is rather 'light' on IT resources and competency, Brivo may ultimately be a better fit despite it's higher lifetime costs. However, if a customer already has a well-developed IT infrastructure and support team in place, they will likely capture 'hosted' benefits at a lower cost.