Great attendance with a limited number of new products marked ISC West 2013. Brian, Carlton, Ethan and myself attended, putting together the following list of highlights for you to review:

One other, not on the list, but certainly worth viewing is the first Windows based IP camera, which won the event's "Best in Show," but was widely ridiculed by IPVM members.

In the most interesting juxtaposition of the show, Bosch figuratively and physically stared down Axis with 100+ cameras, including their just announced 4K/12MP cameras. 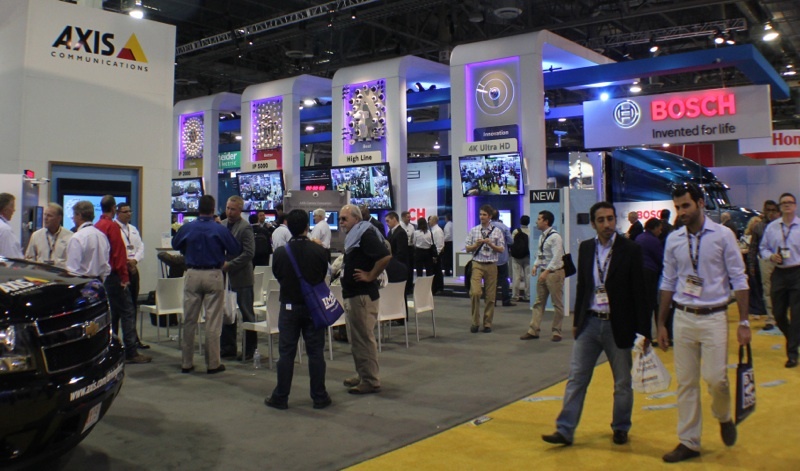 The industry benefits from strong rivals to Axis, fostering more quality options and pushing the market forward. We are betting on major Axis releases this fall!

However, the standout was alarm monitoring mega provider Monitronics, who showed again that it's all about men, with a booth babe who grabbed men passing by: 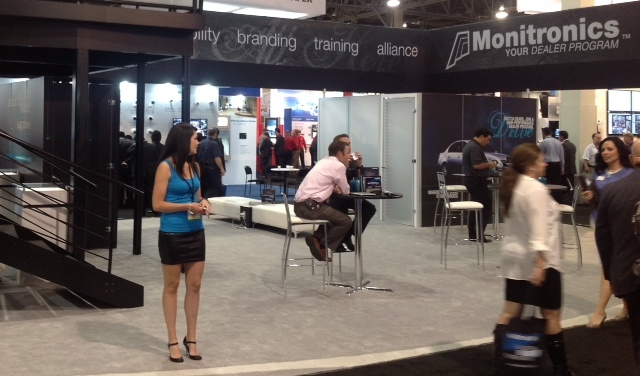 Given their sexist marketing campaign, 'You can be whoever you are (as long as you are a man)', this tactic at the show was unsurprising, but disappointing nonetheless.

Avigilon has a huge marketing budget, likely to be $10+ million this year. And they spent heavily at ISC West, with numerous representatives scattered around the hallways and entrances to the show, encouraging people to come by: 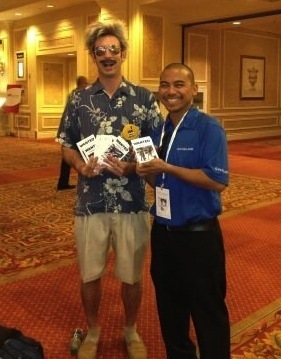 And not only did they run an ad in the show daily, they did a double page release: 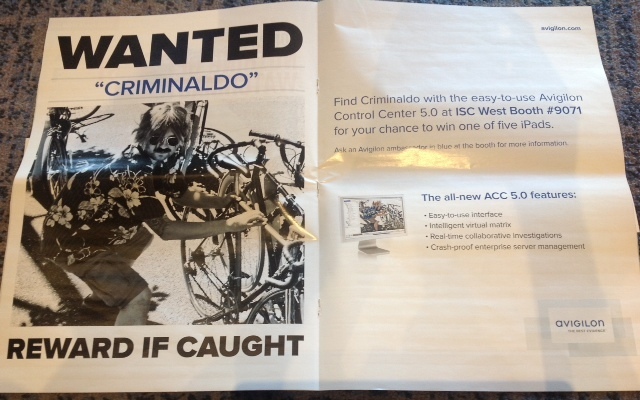 Unfortunately, it highlighted the same 'new' product that they announced and showcased 7 months ago at ASIS [link no longer available].

If you use email, you are likely a victim of Chinese manufacturer longse's relentless spam campaign. Marked by poor english, no means to unsubscribe and new emails from different reps multiple times per week, they have successfully bombarded the industry. And, now they came to ISC West: 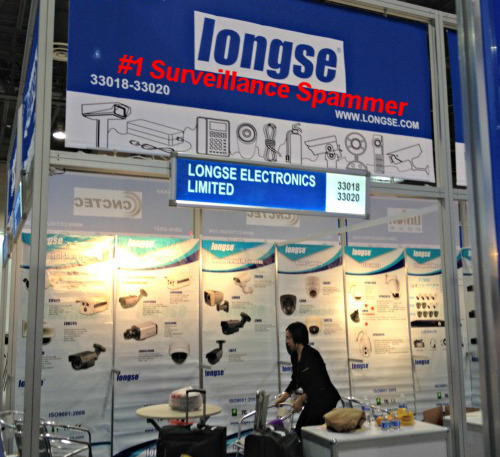 Brian actually went to their booth, asking them to remove his email from their list. While they agreed, they then asked to scan his badge! Oh Longse!

The Most Difficult to Find Major Booth - Genetec

Trade shows are filled with big, bright displays and signs. Bucking this trend is Genetec, who demonstrated what not to do when displaying your company name:

Their wordmark is far too low, and too light, making it hard to find their booth.

We're Not on the Show Floor - Verint

Despite the robust attendance, one former major manufacturer choose a meeting room over an exhibit at the show floor. 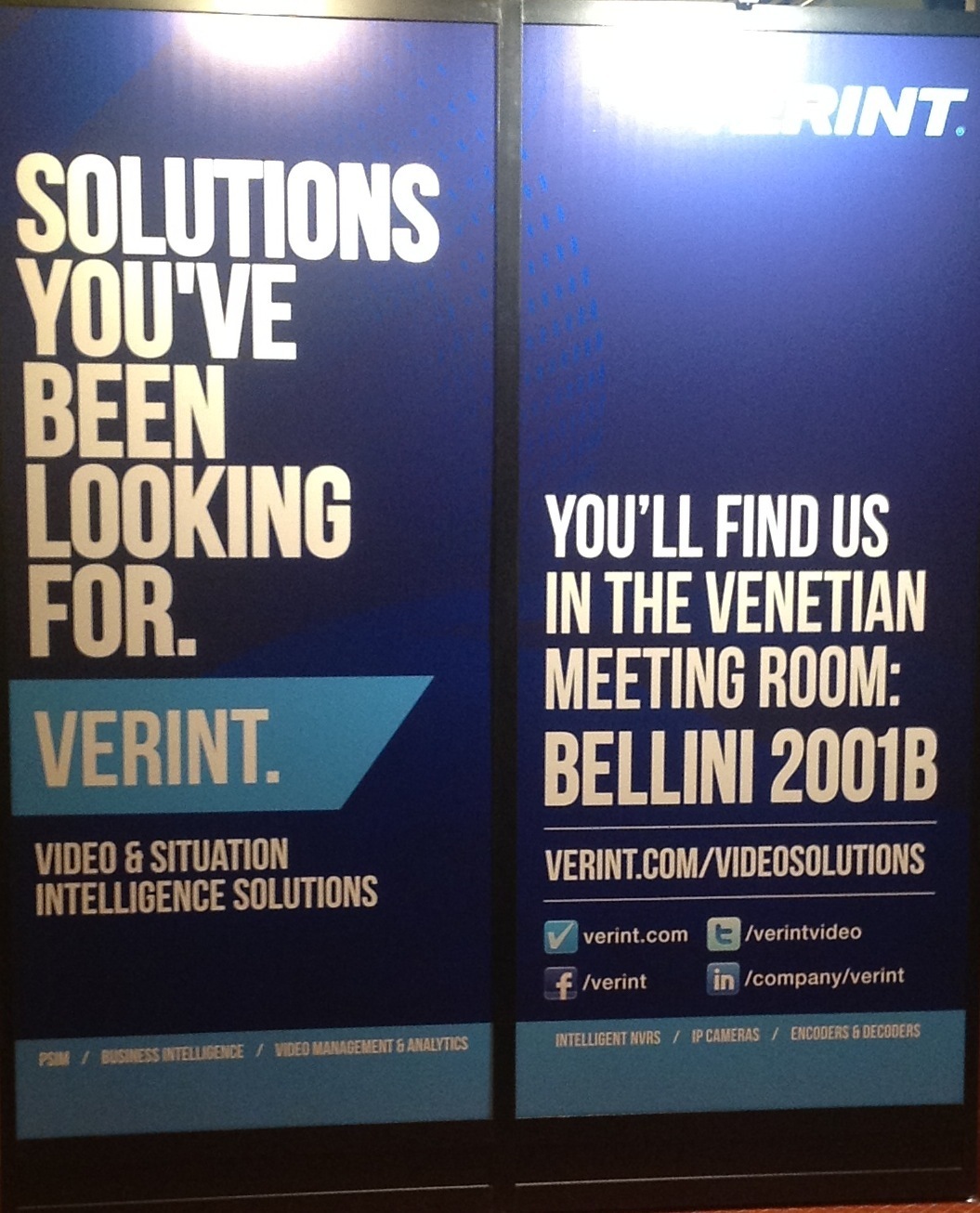 Verint continues to fade from the mainstream, with revenue on a steep long term decline.

Chip maker Ambarella showcased a who's who of major manufacturers, like Avigilon, Dahua, Hikvision, Honeywell and more, who use their components: 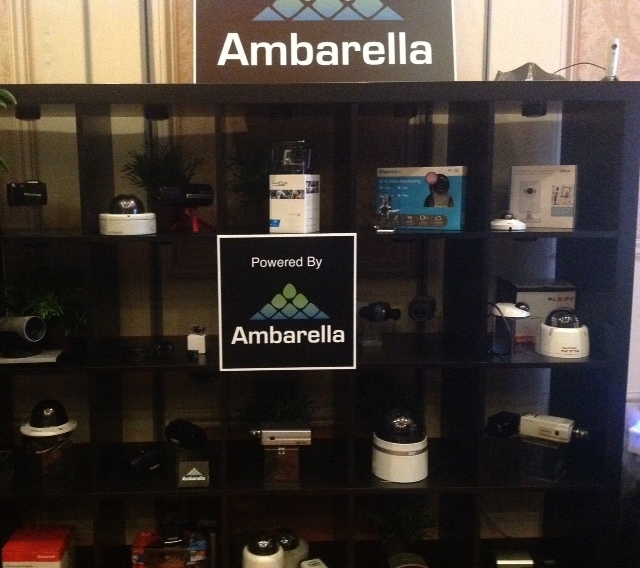 Their main focus was their 4K/12MP system on a chip [link no longer available].

We Are Everything to All People - Dahua

While Dahua continues to gain steam as a top budget IP provider, their ISC West exhibit strangely marketed a wide range of offerings from "Traffic Surveillance" to "Video Door Phones" and more: 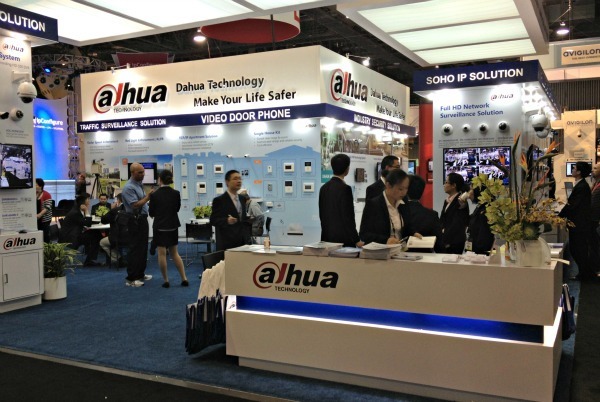 Don't Call it a Comeback - Mobotix

At ISC West, Mobotix showcased more new products than they have in the last year or more (a main concern we have repeatedly raised as their growth rate has fallen behind). The main display was the new M15 camera that includes an option for an integrated thermal sensor: 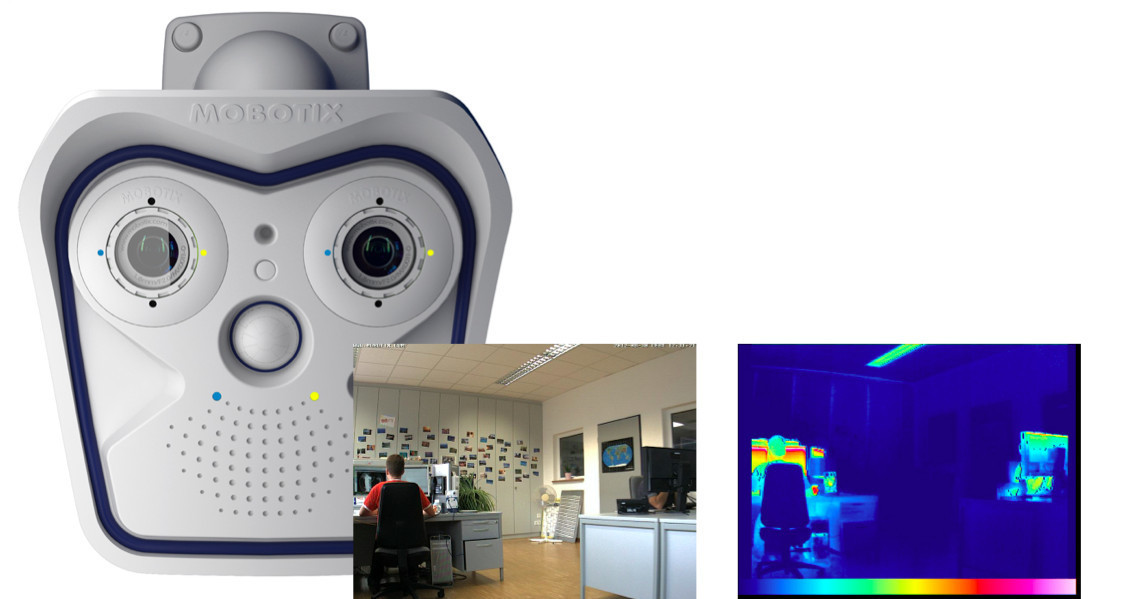 The line will allow multiple sensors to be swapped up, in the field, on demand: 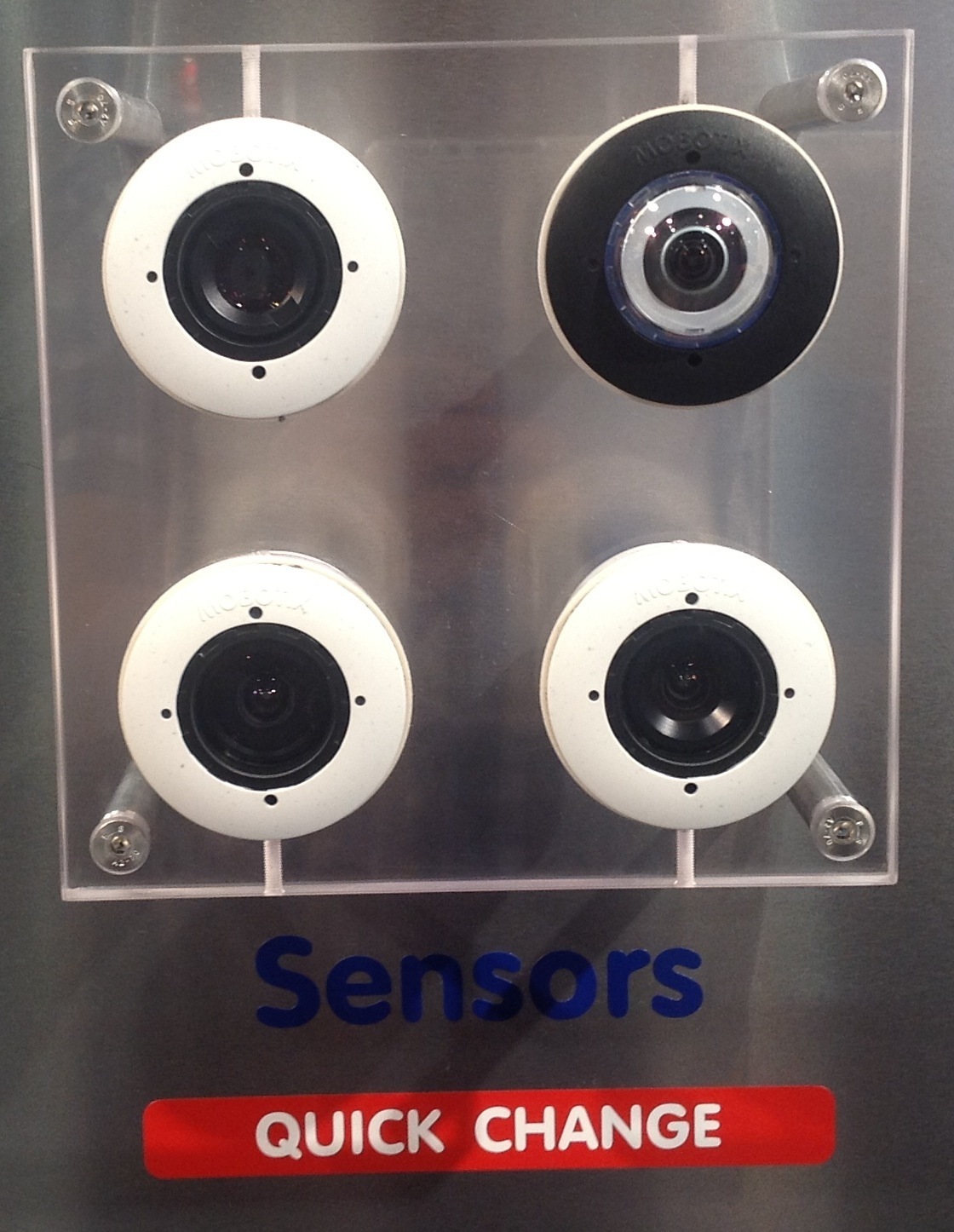 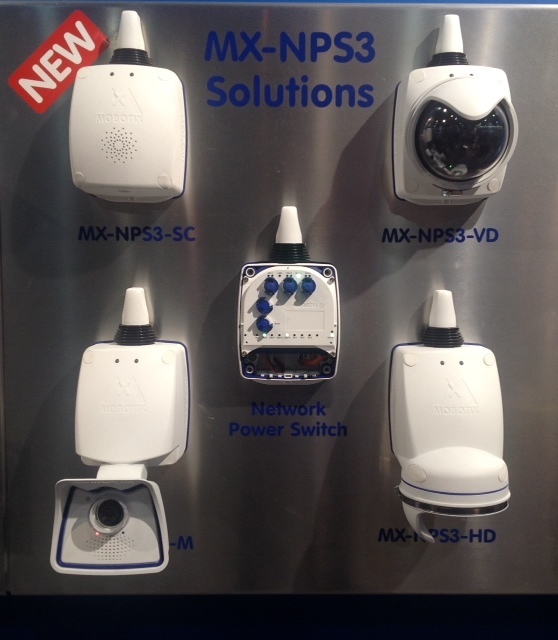 Also, Mobotix demonstrated a new motion detection algorithm to be included on their new generation cameras that they claim will eliminate false motion detection from rain and other common nuisances. Plus, they discussed a new VMS client to replace MxControlCenter later this year that will provide much needed usability improvements.

Perhaps the strangest acquisition in the last few years was thermal gorilla FLIR purchasing budget specialist Lorex. ISC West was the first major show for them since the deal.

FLIR's team wore shirts listing the wordmarks for FLIR and Digimerge (Lorex's professional brand) next to each other: 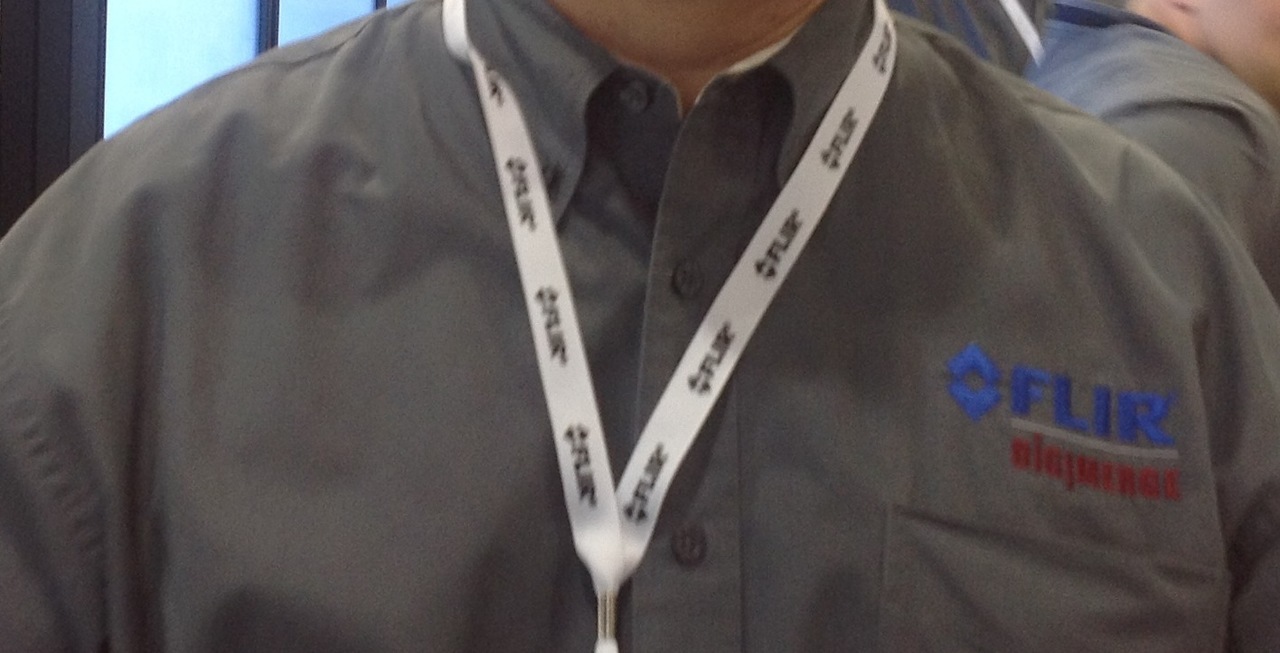 Plus, the branding in their literature and displays showed the two side by side. 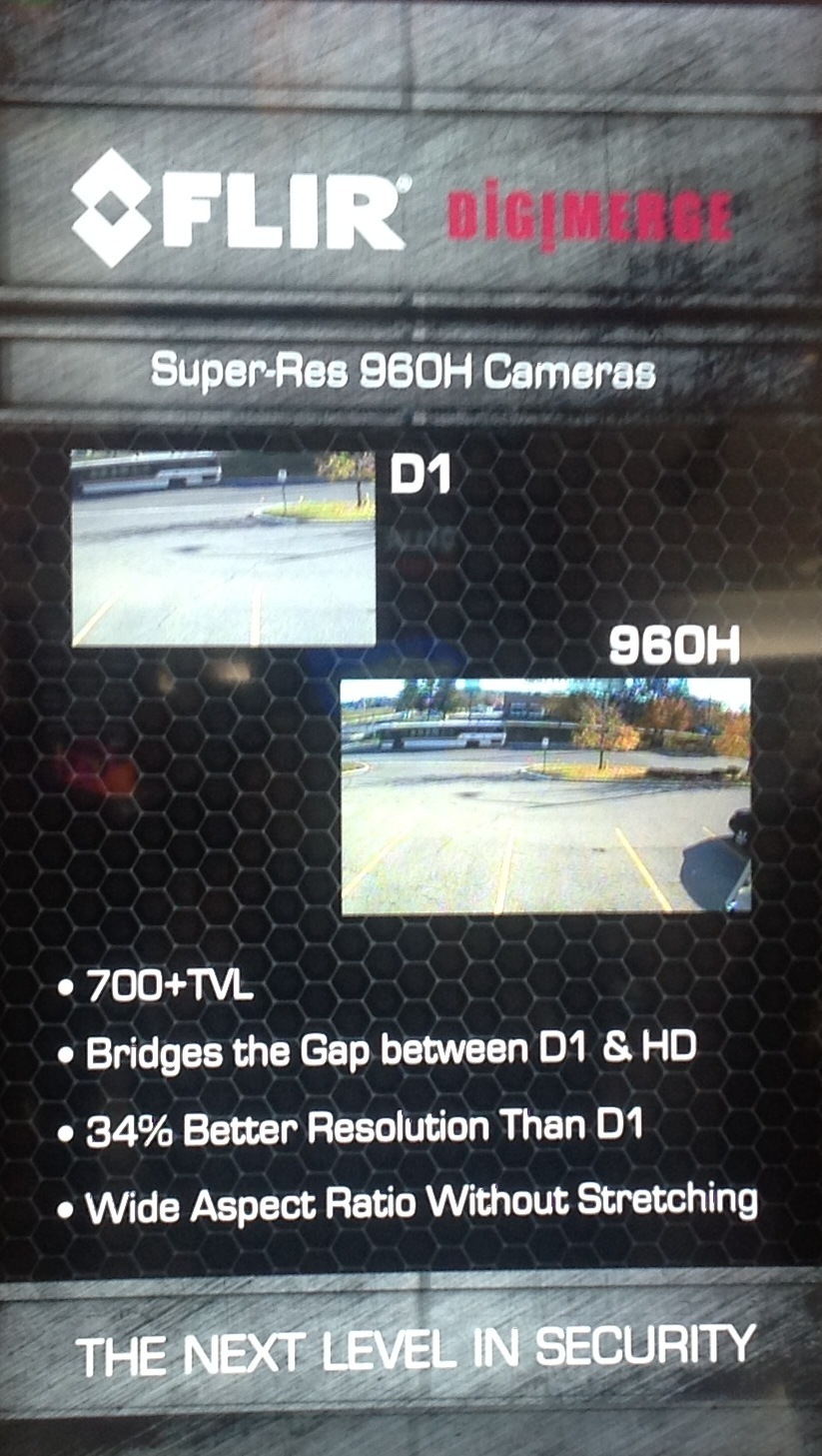 It's quite a combination - the biggest brand in thermal next to a me-too budget surveillance brand.

While we wonder if this devalues FLIR brand, FLIR's team emphasizes that it is bringing Digimerge's reputation up by association with FLIR. They believe this will help them get into more accounts that thought FLIR was out of their league in the past plus allow them to upsell other parts of a surveillance system. We remain skeptical of the combination, especially if they do not raise the sophistication of the Digimerge offering.

FLIR says their plan is to eventually phase out the Digimerge brand and simply label all products, "FLIR".

This was a very well done LPR demo. We do not know how good this offering is, but it is a very effective real time demo showing capture of a fast moving license plate:

All aboard this manufacturer's 'camera on a train' demonstration.

The one practical benefit it does have is showing performance on / across moving objects, an area where cameras can have problems.

Smoke/fog demos are nothing new to security shows but this display that allowed people to go inside was nicely done:

A Challenger to Lenel? 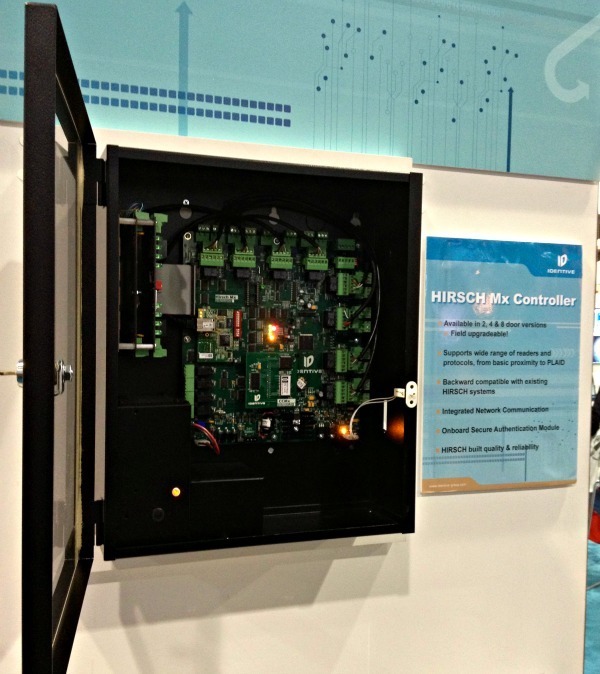 With its 'Iris on the Move' Pass Thru, Sarnoff is now claiming to use biometrics to authenticate drivers inside cars: 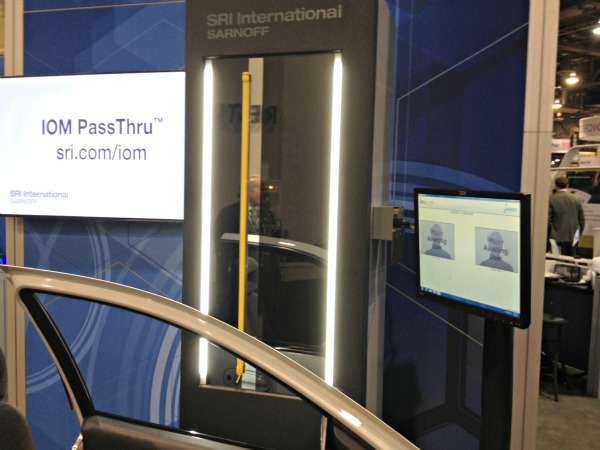 No surveillance soup for you! Seinfeld fans might have been excited: 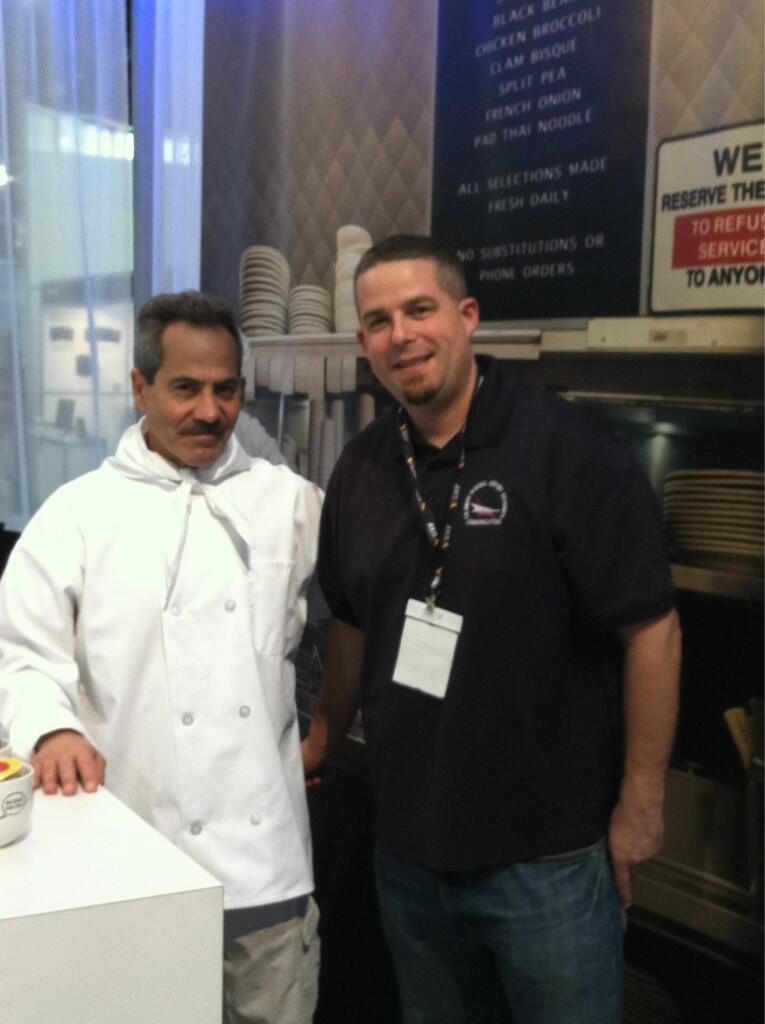 Unfortunately, we still have no idea who this company is or what they do.

Perhaps the most catching ad came from VMS manufacturer ipConfigure:

If you are wondering, 'How the hell can ipConfigure figure out when a computer was stolen from a desk?" join the club. We asked them and it requires manually defining zones for where the computer and desk are located. As such, the ad is highly misleading as most would assume that the computer automatically knows what a desk and computer are.

With some time to kill before our flights out, we went down a few miles to the Gold and Silver Pawn Shop, the home of the Pawn Stars TV show. While the shop has an incredible array of expensive products for sale and an armed guard at the door, there were only a few, shoddy looking cameras. For example, 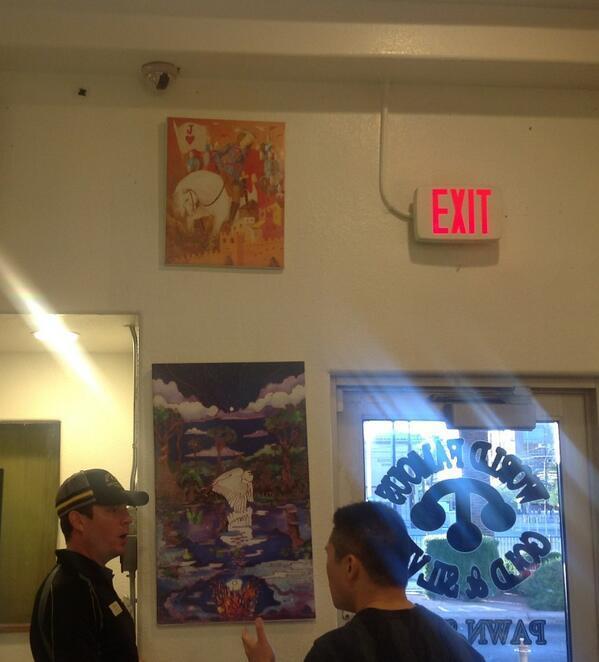 Forget the Cake Boss and the Soup Nazi, perhaps a manufacturer installs new surveillance in the Pawn shop and have Rick and Chumlee at ISC West 2014.

Manufacturers were thrilled with ISC West 2013 attendance. Now, the question is: What happens with ASIS 2013 in Chicago [link no longer available] (Sept 24-27th)?

We suspect attendance will be quite weak. Why?

Certainly, ASIS's core security manager audience will attend but we doubt the overall numbers will be anywhere close to this year's ISC West performance.