Sick of red light and speed cameras? A lot of people are. There are entire websites and web forums devoted to the public’s disdain for automated policing. But is there a way to beat them? Forget the aerosol sprays and chunky license plate covers [link no longer available]. In this post we show you, straight from a US government commissioned report, what things have been proven to give ALPR systems problems in reading plate numbers.

Because more and more law enforcement agencies are using automatic license plate recognition, the International Association of Chiefs of Police, with a grant from the National Institute of Justice was commissioned to asses ALPR implementation among U.S. agencies. It used results from 305 agencies across the U.S. including one of the biggest ALPR users, the Washington, D.C. Metropolitan Police Department [link no longer available]. The final report is where this data comes from.

The most common types of ALPR being used by U.S. agencies is mobile. Ninety-five percent of respondents said they used mobile APLR, while under 20% use fixed or portable.

However, mobile has the lowest capture and read rate of the three, according to the report.

Beating ALPR is much more simple than spending money on an infomercial product. Here are the three main things highlighted in the report:

Because ALPR systems often rely on reflectivity, plates that are bent, dirty or damaged “may cause the ALPR software to misidentify a character.”

Bike racks, tow hitches and town bars are common physical obstructions that can lead to a misidentified license plate. A repo man from Maryland I spoke to said tow hitches are something they have a problem with, and they suspect some SUV owners have them just for this purpose.

The report provided these examples of unreadable plates:

“Some colors, especially reddish tones, may be difficult for ALPR system[s] to read,” the study says. It doesn’t say why but it does say plate design has a major impact on how well an ALPR system is going to read a plate. Not only to plate designs vary from state to state and within a state, the shape of the characters also vary.

Other things that can impact the accuracy of a read are whether the numbers are raised or not, the report says, but it doesn't indicate whether that is better or worse for determining plate numbers. Some systems aren't configured to read plates from other states. The report does not identify which those are.

Data on U.S. ALPR capture and read rates is hard to find, but these are the lowest acceptable performance rates for Europe's Schengen member states:

Ninety-five percent of the agencies using ALPR used it mainly for auto theft. Most (68 percent) reported an increase in vehicle recoveries and arrests in auto theft cases after adopting ALPR. And other less common uses like toll enforcement, speed and stop light enforcement and calculating traffic flow. 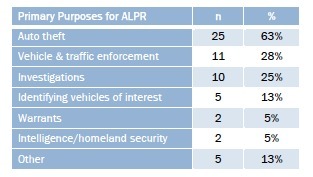 Are a Lot of Agencies Using ALPR?

The number of agencies using ALPR is growing steadily every year. Of the 305 agencies surveyed by the IACP, 70 (23%) said they used ALPR. A similar survey from 2011 found that larger agencies were adopting the technology at a faster rate. Of these larger agencies (10,000 or more officers), 71 percent use ALPR.

Do Most Agencies Have Policies For ALPR Use?

Most do not. Only 48 percent actually had any written policies for ALPR use.

How Long Is ALPR Data Stored?

Around 40 percent of the agencies surveyed store the data for six months, 13 percent store it indefinitely. Nearly half (43 percent) updated their “hot lists” daily.