The end of 2011 marked Axis's slowest growth quarter in more than 2 years plus the company offered pessimistic guidance for the short term. While Axis is still expanding notably, especially for its size, it is down from its incredible growth pattern of the recent past. In this note, we break down the financial details and examine Axis's future plans.

Let's start with a review of key datapoints in the Axis Year End Report (see Text report and Powerpoint):

Industry watchers should look carefully at Axis's next quarterly report scheduled for April 2011. If Axis turns in weak year over year numbers, this would be a negative sign and show a trend.

However, we do not see any specific mistake Axis is making. Their new product development was strong throughout 2011 and no obvious self-inflicted errors are appearant.

One of the most interesting slides we found in Axis' presentation was about their future. While the slide is titled 'Industry Future', we see this as much more about Axis's future positioning: 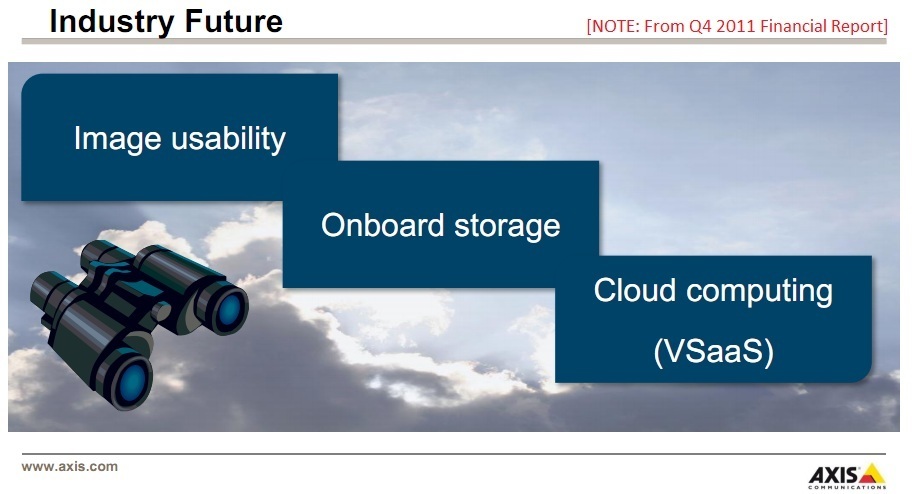 Interesting to note, video analytics is left out of Axis's big 3 bullets for the industry future.

This noted, we think the foundation of image usability and on board storage are two solid pillars for future mid term growth.

Surveillance Trends at Milestone Conference 2012 on Feb 15, 2012
Each year, the Milestone Partner conference provides an opportunity for...
Comments : Subscribers only. Login. or Join.