Try finding an IP pinhole camera or a MP pinhole camera. Even in 2012, it is nearly impossible and the choice is essentially analog or nothing. Attempting to solve this problem is Axis's new P12 release. Of course, Axis is neither alone nor first. Earlier this year, Mobotix released a similar offering, the S14. In this note, we examine the features and pricing of the Axis P12 comparing it both to analog and Mobotix.

The P12 series cameras consist of a small remote unit which contains the image sensor and lens, and a main unit containing all other electronics. The two are connected via a Cat 6 twisted pair cable with six-pin RJ12 connector, up to 8m (26') long (included). This cable may be shortened to length, but may not be extended.

Three models will be available, two indoor models, P1204 and P1214, as well as one outdoor-rated model, the P1214-E. These models differ in sensor configuration only, as shown here: 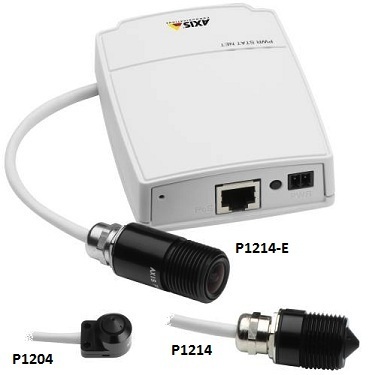 At ASIS 2012, Axis displayed an ATM mock up with multiple P12 pinhole cameras installed. Users may be able to make out one located next to the "T" in ATM, but another is hidden to the left side of the ATM, as well. Others were even more difficult to spot: 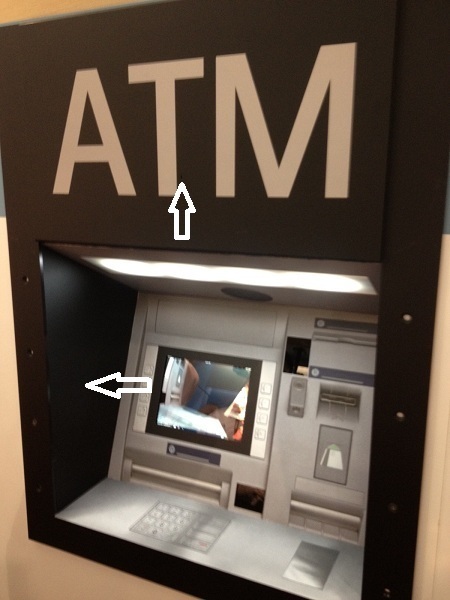 For many reasons, banking has been slow to IP and we think this will be a moderate driver for this market. Low cameras count, narrow coverage areas and small sites reduce the advantages of IP overall. The P12 series certainly offers increased pixel count for banks (720p vs SD analog). However, ATMs routinely suffer from severe backlighting / WDR problems which motivates use of WDR specific cameras. It will be interesting to see how the non WDR P12 720p compares to box WDR analog cameras often used inside ATMs.

Mobotix's recently-released S14 series is the closest comparison to the Axis P12 series, as few mainstream manufacturers have released remote head/central unit models such as these.  However, there are some key differences between the two:

Axis released one of the only other options, the P85, earlier this year but that is a long strip form factor usable only for wall / doorway mounting. It does have the advantage of not requiring a box but it is twice the price.

The main competitive contrast remains analog where many pinhole cameras can available. However, at less than $500, the Axis models eliminate the need for an encoder and upgrades resolution to HD. This combination should be attractive to many IP users. However, analog will continue to support a much wider range of pinholes lens (e.g., see Marsh Electronic's pinhole lens line) than Axis.

This release will help resolve a long standing disadvantage for IP cameras and help expand Axis into yet another niche. No doubt, to the great displeasure of Mobotix, it will overshadow their recent release which was their big announcement for the entire year.