Axis had its best quarter in more than a year, rebounding from recent slow growth, to its old high growth pace. In this note, we examine what drove it and whether they can sustain it.

Key details from the report:

On the call, Axis mentioned that EMEA benefited from soft comparables (i.e., a weak Q3 2012).

The access control expansion was mentioned repeatedly, but no specific guidance was given for specific sales. 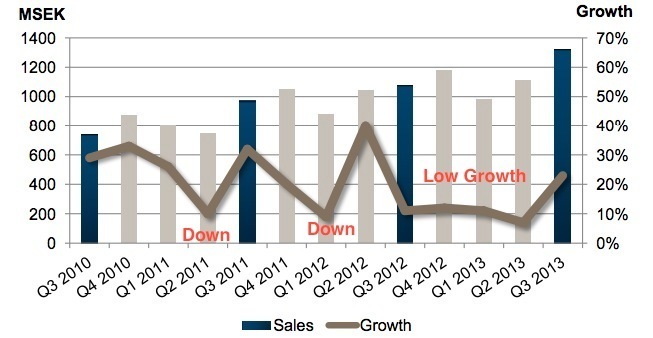 When asked about acquisitions, Axis did not appear interested in or planning to acquire any company, noting that they "have no history nor tradition of growing through acquisitions" and that "it is not a central part of  our strategy going forward either."

When asked about all regions continuing performing strongly and whether there is a trend shift, Axis responded, "We don't see any underlying changes happening ... many positive effects happening at the same time in one quarter." This implies that Axis themselves may be expecting lower growth than this quarter's in the recent future.

Axis says they are happy with the progress with small systems, and rate of downloads of ACC, but did not offer specifics or numbers.

No word on how much AVHS is contributing...