Axis has announced 10 domes, including a new Q35 and P32 series. In this note, we contrast them to existing M and P series domes to better understand their features, pricing and positioning. 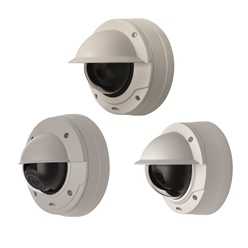 Q35 domes come in 1080p resolution only, the first first Axis models at this resolution to feature WDR (Which Axis calls Dynamic Capture). Two lens options are available (3-9mm and 9-22mm) in both indoor and outdoor versions.

The Q35 series is priced above existing P33 models and new P32 series cameras, ranging from $999-1,1249 depending on lens and indoor/outdoor options.

The release of the P32 and Q35 series has two key effects on Axis's positioning: