Megapixel surveillance manufacturer Avigilon announced plans to IPO [link no longer available]. This is a major and rare move for video surveillance companies, riding on the explosive revenue growth of Avigilon for the past few years. In this note, we examine the details and the potential impact of Avigilon's IP0. Update: We examine potential concerns and strategic issues from reviewing their detailed financial reports.

With the proceeds of the IPO, the company intends to significantly expand product development (hiring 30-40 people in the next 2 years) and expand sales offices in Brazil, China, India, Eastern Europe and South Africa.

Avigilon has not yet disclosed how much it is looking to raise nor the target valuation.

Below is a graph of revenue growth showing how fast it has been. Note it does not include 2011 where Avigilon's near 100% growth rate has continued: 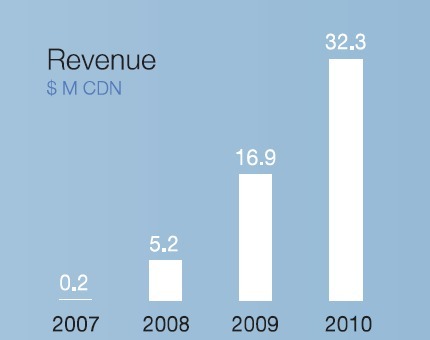 The continued growth rate, especially in 2011, and the approaching of $60 Million in annual revenue is quite impressive. While still below companies like Mobotix (~$100 Million), they are catching up to Genetec, Milestone, Arecont Vision, IndigoVision who had a huge head start on Avigilon.

On the negative side, a number of Avigilon's detailed financial metrics point to potential concerns. These are specifically:

Of these three metrics, the one that raises the greatest concern/interest is the low gross margins. Low gross margins generally mean one of two things: (1) the company has a difficult time selling so it needs to drop price to get buyers or (2) the company has explicitly decided to set agressive price points to gain market share. Avigilon obviously has no problem increasing sales and their prices are very attractive (people regularly talk about how 'cheap' Avigilon's encoders and MP cameras are). Our suspicion is that Avigilon has set low prices and is accepting below market gross margins as a company strategy. [Note: Because of the IPO plan, Avigilon is in a dark period and cannot comment on this topic.]

So long as Avigilon can manage such fast growth, we think this is a promising strategy. As fast overall IP camera market growth is still likely for a number of years to come, giving up short term profits is likely a good tradeoff to establish long term greater dominance.

The second and final concern we have is the relative low spend on R&D. Over the last year, Avigilon's new product announcements have been relatively minor (especially compared to their growth rate). While the 29MP camera announcement generated buzz, it is an incremental update of a 4 year old product line - not a radical new innovation. We suspect, though are not certain, that the extremely fast growth has limited free cash flow. Once the company IPO occurs, we anticipate that the proceeds will be used to ramp up R&D expenditure (as stated in the prospectus) and new product development. This should be watched.

Mobotix Partner Program Changes Examined on Oct 02, 2011
In September 2011, Mobotix announced a new partner program that shifts the...
Winners and Losers Fall 2011 on Sep 25, 2011
Now that the dust has settled from the new announcements of the last month,...
Comments : Subscribers only. Login. or Join.