While Avigilon has touted how their multi-megapixel cameras can replace up to 95 conventional one as well as replace PTZs, they have now announced their own line of HD PTZ cameras [link no longer available]. As such, this is an interesting and somewhat surprising move. In this note, we examine these new camera features, pricing and how they compare to options from Sony, Axis, and Panasonic.

The Avigilon PTZ line [link no longer available] consists of two models, based on their latest H3 camera platform. These cameras have the following key features:

This image shows the HD PTZ camera, with wall mount: 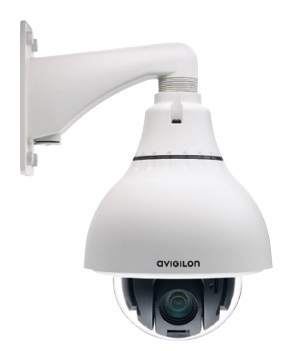 Third party VMS use is limited and likely will have reduced performance:

Avigilon's PTZ model's pricing is in line with competitive products. Based on MSRP and Avigilon dealer discount, we estimate street pricing will be around $3,300 for the 2MP version, slightly higher than competitors such as the Panasonic WV-SW396 [link no longer available] and Sony SNC-ER580, and moderately lower than the Axis Q6035-E (around $3,800 online). However, this release does not set any groundbreaking low price points, unlike Avigilon's H.264 encoders and, to a lesser extent, their 1MP and 2MP box cameras.

Avigilon users will appreciate these cameras' pricing and features, as they may now install an end-to-end Avigilon system, instead of turning to third-party PTZs. For users of other VMSs, however, the lack of additional features gained by integrating with ACC, and potential integration complications due to using ONVIF with custom extensions, make these cameras less attractive.

Considering all the above, we see this announcement as a tactical product release to expand Avigilon's target markets, such as gaming, municipal surveillance, critical infrastructure, and other high-end systems where PTZs are required.