Last week, we reported Arecont lied in a recent ad. Now, Arecont is threatening legal action against IPVM. In this note, we explain how Arecont lied, how their objection ignores our core complaint and the US laws that cover false advertising.

[For Arecont's position, see the Cease and Desist letter Arecont sent to IPVM.]

[Update January 2013: Arecont has not followed up with any further action.]

In the ad, Arecont shows an overview of a cafe. Within the overview are two circles - a larger one connected to a smaller one that presents a zoomed in view of a cashier handing a bill to a customer. 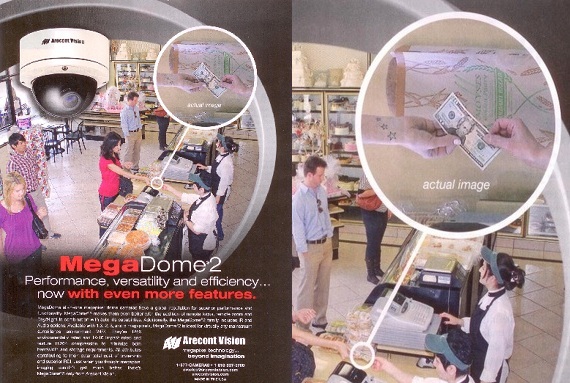 However, looking at the circles side by side, they are clearly not the same scene:

What is going on here?

The scene displayed in the ad differs from the scene the 'actual image' is from. Arecont confirmed this when they later released the 'actual video' of the scene.

The comparison below contrasts them: 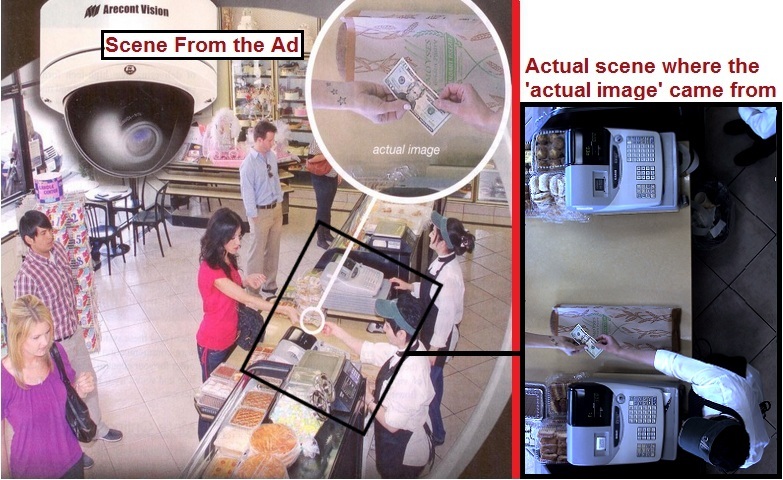 Arecont's ad falsely misrepresents their performance by showing a very wide Field of View (FoV) in the advertisement but then taking the 'actual image' from a far smaller FoV with a different angle.

The ability to captue fine details over large areas is a key competitive differentiator in the surveillance camera market. The smaller the FoV, the easier it is for any camera to capture and display such details. Arecont's manipulation of images from two FoVs enables them to deceive and falsely represent the ability of their product to capture such details.

Not only is this an ethical issue, multiple US regulations and laws exist to stop vendors from false advertisement.

For instance, the Federal Trade Commission has rules against this:

"The FTC Act prohibits unfair or deceptive advertising in any medium. That is, advertising must tell the truth and not mislead consumers. A claim can be misleading if relevant information is left out or if the claim implies something that's not true."

The Arecont ad clearly implies that the 'actual' image is from the scene displayed in the ad, when it is not, nor is it disclosed in the ad whatsoever.

Additionally, the US Lanham Act protects against this:

"In commercial advertising or promotion, misrepresents the nature, characteristics, qualities, or geographic origin of his or her or another person’s goods, services, or commercial activities, shall be liable in a civil action by any person who believes that he or she is or is likely to be damaged by such act."

Indeed, this ad provides grounds for Arecont's competitors to seek damages from Arecont.

"The image in the circle labeled 'actual image' in Arecont’s print advertisement is, in fact, an actual, true image from an Arecont camera. Rather than falsely conclude that the image was simply too good to be true and, therefore, that it must be false advertising..."

Whether or not the 'actual image' is from an Arecont camera, the core issue remains. The false advertising is a consequence of using an image that is not from the actual scene displayed in the ad but one that is far smaller.

Additionally, we upated our original post to reflect Arecont's feedback on the 'source' of the individual images.

Hikvision Attacks IPVM on Mar 20, 2017
Hikvision has attacked IPVM repeatedly over the last month, both in the...
Axis: Take Down This Deceptive Commercial on Dec 24, 2015
Axis' puzzling marketing campaign continues, reaching a new low. Check out...