What is the camera of choice for securing archaeological sites? We talked to archaeologist Chris Merritt [link no longer available] about what cameras he found most successful based on his research on the topic.

Utah, where Merritt works as at the state Department of Heritage and Arts, has approximately 90,000 archaeological sites.

“There is a big threat to these sites nationwide. These sites are being systematically looted. There is an underground black market for archaeological materials,” he said.

There are federal laws, the Archaeological Resources Protection Act, for example, but there are very state or local laws dealing with protecting archaeological sites. Nationwide, Merritt says there a couple hundreds sites that are being looted or vandalized.

Archaeologists are interested in cameras are to provide a record if someone loots or vandalizes the site, but are most often used to get an idea of how people are moving through the site so they can tell if they need to put up a physical barriers in certain spots to protect sites.

The problem with adding surveillance to many of the sites is that they are in remote locations.

“The majority of them are located far away from roads or cities or anywhere we can use traditional surveillance systems,” he said. Sometimes archaeologists are away from sites for weeks at a time so they need something that has efficient battery life, can survive the elements and need very little maintenance.

Merritt found that the best solution was trail cameras. His brother, a former wildlife biologist, suggested them.

“A traditional surveillance system just didn’t offer the flexibility we needed,” he said. “Sometimes it’s a three-hour hike in so we needed something that didn’t need much maintenance and something that could be easily concealed.” Merritt also says that archaeologists aren’t typically that familiar with surveillance systems and trail cams are easy to install and operate out of the box.

Here is an image example from their research: 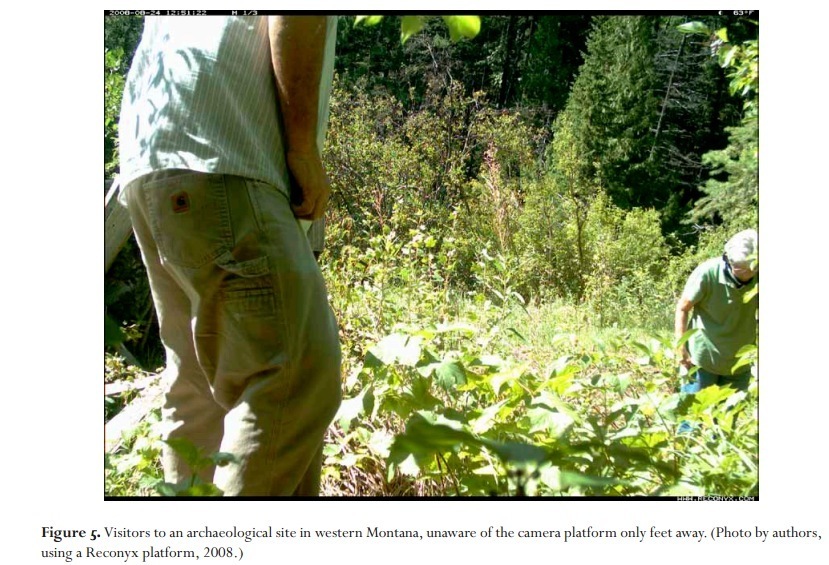 When he first started using trail cameras, the biggest limitation was cost. Back then, he says, they had to be special ordered. Now there are models in stores for less than $100.

Another limitation for trail cams it the inability to see and react to captured images in real-time. There are trail cams with cellular or satellite connections that can send images and alerts, but even so, the sites are sometimes so far out, there would be no way to stop something in progress.

Power is the biggest limitation, he said. They considered installing solar cells to provide power, but determined a solar cell would compromise an concealment.

One of the main mistakes people make is not checking the field of view of the cameras after they set them.

“You have to make sure the camera is pointing at what you want it to point at. We mounted one and because of the placement it was only catching feet. If you don’t check that and you come back in a month, then you’ve wasted a month,” he said.

Merritt says he recommends more expensive Reconyx trail cameras for projects with a budget that will allow it, because of security features he’s found helpful. He says the cameras are built in a way that when properly secured to a tree or a post, it would be difficult for a person to get bolt cutters inside where the band connects to the case. If someone was determined and managed to steal the cameras, they are password protected and no one can access the SD card without having computer access and the password. These cameras can also send back their location to the owner when a person connects them to the Internet (when trying to enter the password, for example).

The specific model Merritt used for the paper was the Reconyx PM35C31.

Unfortunately though, he says, most archaeologists don’t think about security features or even cameras until after something bad happens. You can read his full paper on the topic here.