iPhones will soon have fingerprint readers. Few brands have Apple's immense market impact, and physical security increasingly takes its cues from smartphone design. Will the millions of Apple fanbois singlehandedly make fingerprints the hottest fashionable credential? Does this development spell doom for NFC's access control adoption? We take a look in this note.

[NOTE: For background, see our Fingerprint for Access Control tutorial.] 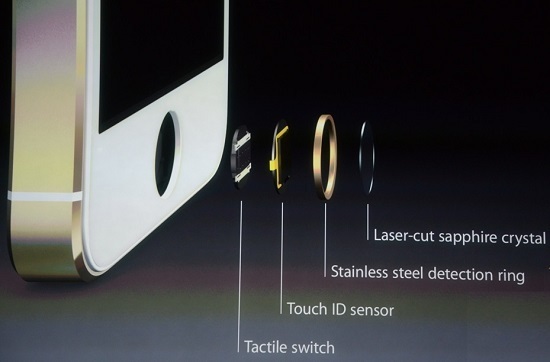 While final details are pending, Apple has released preliminary specs on the sensor:

Capactive Sensor: In contrast with an Optical Sensor, the semiconductor contact 'capacitive' type reader measures electrical resistance of fingerprints, and translates individual characteristics of the print into a user-unique range of measurements. While capacitive sensors are thin, low power, and inexpensive, they generally are not as reliable or accurate as the optical type.

Subdermal Scanning: Rather than reading the outermost layer of skin, Apple will tune the sensor to read prints in tissue beneath the surface. This not only avoids problems of small cuts or surface contamination, but it provides a measure of 'anti-spoofing' protection against lifted prints.

In the video below, Apple describes this feature they deem 'Touch ID' technology:

Notable aspects pertaining to Apple's use of the sensor, aside from simple locking/unlocking of the device include:

Apple describes that 'Touch ID' will be a user option to lock down app/iTunes purchases, or even access to specific apps on the device.

With the iPhone 5S, Apple once again sidesteps including NFC on the device, and instead opts to feature its own security interface method first. While Apple publically cites 'security concerns' as justification in omitting the technology, several sources and past patent filings suggest 'an alternative proximity technology' that is yet to be designed, but absolutely not NFC, may someday be implemented in iPhones.

The inclusion of NFC is especially relevant to the Access Control market, where many claim the technology to be 'the next big thing'. However, with upward of 40% of the US smartphone market (~15% globally [link no longer available]) choosing the iPhone, the credential tech appears no closer to the primetime than before.

Few companies wield as much design influence as Apple. Many industries and individual products take cues from the company, and if Apple declares 'fingerprint technology' a standard security element, which industries will follow? Will the iPhone 5S become the catalyst for the long-latent biometrics boom in electronic access control? We will keep sharp eyes open in the days ahead.