Security behemoth ADT is struggling to make the transition to social media and a world where customers can freely and publicly say what they actually think about the company. In this note, we contrast ADT's approach to social media versus the massive number of criticisms leveled against the company by social media users.

ADT has laid out its "Social Media Terms of Use", an optimistic, if not quixotic, position on the use of the Internet.

ADT has the worst reputation of any security company I know. Yes, they are the biggest in the US but the level of ill will towards them is far out of proportion to their size. It's incredibly common to hear security people not only with negative experiences with ADT but genuine contempt for them.

Social media is a killer for companies with bad reputations. In the old days, companies could control their reputations and paper over it with extensive marketing expenditures. Today, this is becoming unfeasible.

When you look online for reviews of ADT, the results are shocking and terrible for ADT:

Social media will stop ADT from hiding its bad performance. While ADT can try to put social media 'policies' in place, the only thing that will stop the rising tide of consumer unrest will be for ADT to improve the quality of its services and products.

ADT is taking a beating on their Facebook page. Here's an example:

And here's another one, from the ADT Facebook homepage: 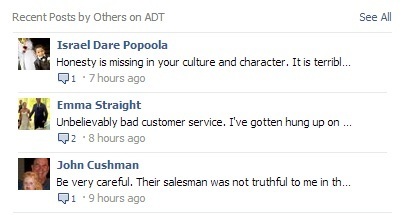 And another one from the ADT facebook the next day: 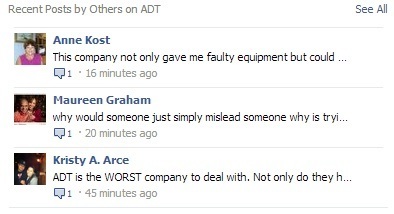 ADT does have customer support people responding regularly to complaints on their Facebook page but the sheer volume is alarming. If you have a problem with ADT services, posting it on Facebook looks like the best way to (possibly) get a resolution.

ADT's social media criticisms are far worse than even much maligned Vivint. Vivint's Facebook page has 3x the number of likes and, more importantly, far fewer complaints from consumers.

ADT Merges With Protection 1 In $15 Billion Deal on Feb 16, 2016
The world's least favorite security company, ADT, is being merged [link no...
Comments : Subscribers only. Login. or Join.