ADT/Protection 1 has won a wrongful death court case in which it was sued by the estate of a deceased customer. However, the attorney for the deceased customer's family tells IPVM this is not the end of the litigation.

In November 2018, US District Court, Kansas dismissed a wrongful death lawsuit comprising 7 complaints against ADT/Protection 1. The suit was filed on behalf of Frost's young son, 4-years-old at the time of her death by an August 15, 2016 fire in her Topeka, Kansas home. The Plaintiff says the Defendant failed in its duties to Frost. However, the court granted the Defendant's motion to dismiss on all 7 counts.

While ADT declined to comment, IPVM spoke with the attorneys for the Plaintiff, an independent legal expert, and several central stations.

Based on those interviews, examine:

The key contentions we found are:

News stories like the one below covered the fire, Frost's death, and the lawsuit:

While the newscaster said ADT "received numerous alarms about the fire," there were only two signals received by ADT during the fire. One was a tamper alarm and the other was a supervisory signal. Neither signal was "about the fire," as this was a security-only system.

The attorneys for the Plaintiff, Leawood, KS-based Rouse Frets Gentile Rhodes, LLC., detailed in the complaint the timetable of events the night Frost died. The following is a digest from "Facts Common to All Counts" and covers items 15-28, beginning on page 5 of the complaint:

On Count 1, Wrongful Death, the Plaintiff claims that ADT/Protection 1 had a duty and an obligation to notify authorities on alarms if the homeowner was unreachable. They did not do so. The Plaintiff maintains that since Frost was still alive even an hour and a half after the first signal was sent to the Defendant, she may have lived had police been sent to investigate the tamper alarm on the Glass Break Sensor at 1:30 AM.

Count 1 also finds fault with the fact that ADT/Protection 1's calls to Frost and Frost's grandmother showed up as "Unlisted" on caller ID. The Plaintiff told IPVM this lack of identification directly led to Frost's grandmother not answering the phone:

On Count 2, survival action and negligence, the Plaintiff alleges that the Defendant's negligence was wanton and directly caused the decedent suffering before leading to her death:

In bringing Count 3, Fraudulent Misrepresentation, the Plaintiff cites other promises made by the Defendant on its website regarding dispatch of authorities on signals if the homeowner is unable to be reached as seen in this excerpt from the complaint:

The Defendant was unable to notify the homeowner on the alarm, so per their own advertised protocol, the Plaintiff asserts, ADT should have dispatched police.

The damages the Plaintiff sought were unspecified on Count 3.

Count 4 states that because of the alleged fraudulent behavior of the Defendant, the Plaintiff claimed there was a breach of the Kansas Consumer Protection Act (KCPA) which aims to protect consumers from deceptive business practices. The purpose of the act is spelled out in this excerpt from the Kansas Legislature site:

Furthermore, Count 4 claims that because the Defendant's offered monitoring service was "useless" during the fire that killed Frost, it was useless during the life of the Defendant's contract with the decedent. Based on this, the Plaintiff sought specified damages of $10,000/day for every day the contract was in effect, a period based on documents provided to IPVM by the Plaintiff of at least 5 years.

This leads to a likely damages ask for Count 4 of at least $18.25 million.

Counts 6 & 7 sought damages for alleged breach of implied and express warranty, respectively and stem from the Plaintiff's allegations that the Defendant warrantied that they were fit to monitor and dispatch as needed. The implication was that they use their expertise to know when to dispatch emergency responders and that they would not use an unlisted number when calling to notify on alarms as seen in this excerpt from Count 6: 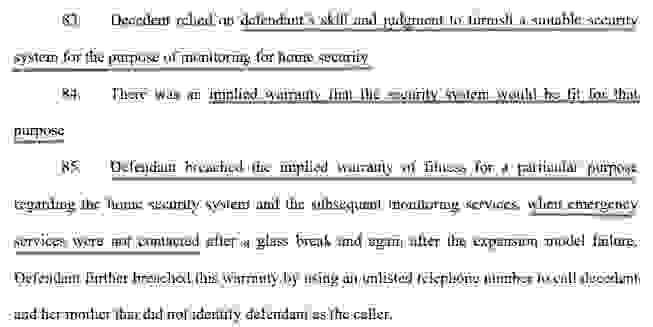 Similarly, the Plaintiff alleges the Defendant expressly warranted that upon system activation, they would dispatch first responders if the customer was unreachable:

Damages sought for counts 6 & 7 were unspecified.

The US District Court for the District of Kansas issued its final judgment for the case on November 19, 2018. It granted ADT's motion to dismiss on the grounds that its contract with Frost, which they say she signed on March 12, 2014, was binding and governed all aspects of the relationship. It is this contract which the Defendant claims trumps all the Plaintiff's allegations and renders ADT basically untouchable. First and foremost, all the counts in the complaint, regardless of what they are, are time-barred by a 1-year statute of limitations as seen in this passage from the final judgment:

The court explains in the final judgment that the negligence claims related to the language on the Protection 1 website are overcome because the Defendant's initial contract with Frost supersedes all other considerations:

For counts 3, 4, and 5, which comprise all the Plaintiff's fraud and KCPA violations claims, the court notes that the Plaintiff failed to argue with particularity the time of the violation and the precise nature of the damage by fraud that Frost sustained:

Finally, for counts 6 & 7, the Plaintiff's warranty complaints, the court notes that again, the original contract between the parties supersedes any other promises or warranties, implied or express:

Rhodes said the real problem in this tragic situation is one of end users signing contracts they don't understand:

Unsophisticated people sign ADT’s ridiculously one-sided, adhesion contract, not realizing that they are relinquishing their rights to seek redress in court if and when ADT fails to perform under the contract. ADT even sneaks in a short statute of limitation that no reasonable consumer will understand. These types of business practices are unconscionable, in my opinion.

Though Ken Kirschenbaum [link no longer available] of Kirschenbaum & Kirschenbaum, P.C., who wrote an extensive piece of coverage detailing how ADT's contract protected it, notes in his article that the facts of this case "are not flattering to ADT," he still feels their legal team performed admirably as seen in this quote from his article:

ADT really knocked this case right out of the park. Of course we don't celebrate the unfortunate circumstances that gave rise to the case, a residential fire resulting in death, but many legal issues were addressed... Giving credit where credit is due, I have to assume that ADT defense counsel clearly laid out the defense.

Furthermore, Kirschenbaum said in his interview with IPVM that the industry distancing itself as culpable when there is a loss is standard and accepted across the industry:

The alarm industry needs to insulate itself from claims arising as a result of alarm equipment or alarm service failure because the losses and exposure is disproportionate to the compensation paid to the alarm company. That is the accepted rationale and it has been repeated and approved consistently in courts throughout the United States and elsewhere.

However, while Kirschenbaum applauds the protective contract, he did feel ADT had not performed as it should have, in light of their stated protocol to dispatch if the home-owner is unreachable:

According to the contract and policy, ADT should have called the police when it was unable to verify the alarm.

ADT initially said it would consult with its legal department and speak with us, but did not respond to repeated requests for an interview.

IPVM spoke with a number of central stations who agree with Kirschenbaum's assertion that the industry distancing itself from liability is the norm. Morgan Hertel [link no longer available], VP of Technology and Innovation at Rapid Response Monitoring Services Inc, pointed out first and foremost that the system in place was not a fire alarm system, and one can not expect a burglar alarm system to protect them from a fire. He also noted that technically, neither of the signals received were typically dispatchable:

My understanding is that they received a contact id event E383 Sensor Tamper. This is classified under Sensor Trouble conditions for burglary alarm devices. The proper response for any E3XX code is to notify someone about a maintenance or repair problem. If the industry sent the PD to every unresolved E200-E300 range of events we would bury every law enforcement agency with false alarms in a few hours.

Other central stations who wished to remain anonymous agreed that the correct protocol on both signals received was to notify the customer, but not dispatch.

The Frost case is far from over. We respectfully believe the district court judge erred in dismissing the claims against ADT and we intend to appeal that decision to the Tenth Circuit Court of Appeals.

Per Frost's Alarm Services Agreement dated March of 2014, she did not elect fire alarm protection. At the time of the fire, she only had a burglar alarm system that is not designed nor UL-listed for detecting and signaling central stations of a fire.

However, the plaintiff's attorney shared with IPVM documents they had just found that show Frost originally did have a smoke detector and 24-hour fire monitoring selected in 2011 on her installation certificate and alarm system proposal when she was preparing to move to a new home and relocate her system. Rhodes said to his knowledge Frost never asked to have her system downgraded. According to Rhodes, the system in place at her home after she moved was not the system she wanted and originally contracted for in 2011:

There was supposed to be a fire alarm included with Ms. Frost’s services. When she moved and transferred her service to her new home, Protection One failed to make sure the smoke alarms were moved and were operational. It seems to me that if someone has contracted for something and is being charged for that service, the equipment ought to work as promised.

These documents are definitely at odds with the 2014 Alarm Services Agreement supplied by the Defendant who makes no mention of Frost's status as a customer prior to 2014.

Beyond the legal issues, the case raises ethical and reputational questions. Certainly, monitoring companies like ADT advocate they offer premium services above and beyond growing DIY offerings. ADT has numerous commercials where they celebrate their saving customers from fires. For example, this commercial about a Kansas City, MO customer:

Certainly, when ADT and other monitoring companies help save lives with quick response and intervention it should be celebrated.

For the Plaintiff attorney's part, he explained to IPVM that "No condolences have been extended by ADT," and that "We are not aware that ADT intends to undertake any remedial action to prevent a situation like this from happening in the future."

Of course, ADT is likely limited by concerns of the ongoing litigation. If ADT does take any action, we will update this report accordingly.