Most city surveillance systems are owned by local governments and paid for by taxpayer dollars, but shrinking budgets can cause cities to skimp on a system or neglect maintenance. However, one Pennsylvania city has created a citizen-run network of cameras and an adopt-a-camera program [link no longer available] to keep up with its maintenance. In this note, we examine this program based on an interview with their managing director and analysis of their operational reports.

The Lancaster Community Safety Coalition [link no longer available] (LCSC) is a non-profit in Pennsylvania best known for its 161 camera city surveillance network. The organization runs primarily on donations so this month it launched an adopt-a-camera fundraiser to make sure the cameras stay on and working.

“We went through a significant downturn because of the recession, but so far we’ve been able to keep the camera system running,” LCSC Managing Director Wes Farmer says. “We hope this program will help us continue to maintain the cameras.”

Farmer estimates the cost of the system at $2,300 per camera, per year (A total budget of $379,000. See the breakdown below) This includes maintenance, monitoring, rent for the building that houses the control room and pay for the LCSC staff. 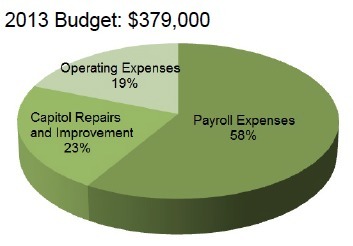 The adopt-a-camera program [link no longer available] asks residents to donate $1,000 toward the maintenance of a camera of their choosing. At the end of the year supporters are provided a report on their camera that includes maintenance history and how their camera was used that year (to investigate a crime or give officers a view of a house fire, for example). The fundraiser was officially announced May 7, and as of May 14, around 140 cameras (out of 161) are left to be adopted [link no longer available].

Farmer says thinks the public will be willing to help maintain the cameras after seeing the role pictures and video played in the Boston Bombing investigation. “We have already added three cameras last year that were fully funded by people who were willing to pay the installation cost and commit to an annual donation to support that particular camera,” Farmer said.

The organization has also received two grants for around $160,000 each from the district attorney’s office and the city. The DA’s office says the cameras have proved their value saying footage “led defendants to plead guilty,” estimating it costs taxpayers $20,000 for each case that goes to trial.

The first cameras were originally installed in 2005 as part of a community crime prevention initiative. Now the system is made up of 161 cameras (145 analog cameras and encoders, 16 IP cameras, including two PTZ), Milestone software, a Firetide mesh network and fiber optic cable that was laid during the system’s original installation. 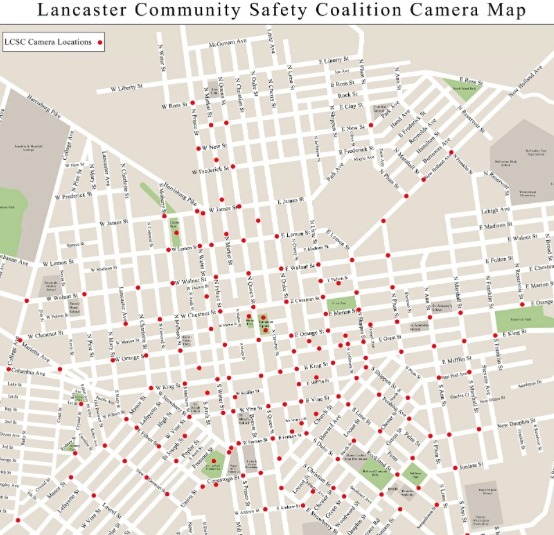 The LCSC was able to save money by having the cable laid at the same time the city was putting in new ones for its stop lights, and the organization was able to get cameras from Bosch (who is also based in Lancaster) for discounted prices in exchange for giving them a platform to test new firmware.

The cameras, which they claim cover 60 percent of Lancaster, record 24/7. The operators are paid staff who monitor the cameras from 12-18 hours daily and listen to the police scanner for incidents and have a hotline that law enforcement can call to request the cameras capture a certain view. Additionally, LCSC can send live feeds to 911 dispatchers and the police station

Video is stored for 14 days. LCSC says it is willing to provide footage to both police and prosecutors and defense attorneys with a subpoena.

Results of the System

Stats from 2012 from the LCSC's annual report [link no longer available] disclosed:

The return is questionable. On average, the camera operators only called dispatch about 1.3 times per day and they only provided evidence for an arrest every 3rd day. For the nearly $400k ongoing cost plus the millions to install, is this really worth it?

“The police would like the system to expand and we have a waiting list of neighborhoods who want cameras,” says Farmer. “I would like to expand too, but I have to wait until I have the community support in the form of donations to be able to support that."

The city and district attorney’s office are likely to continue giving grants to the LCSC because they have an interest in keeping the cameras on, but the amount may vary in the future. So far only 20 cameras have been adopted, but if Lancaster can get this program up and running it could be a way to keep the cameras funded for the next few years. However, at some point, the cameras will need to be replaced, requiring a much more significant investment.

Tax money pays for municipal surveillance systems and technically the public “owns” the system, but the adopt-a-camera program gives people more of a sense of ownership. As we saw in both Philadelphia, where most of the cameras did not work, and Miami where camera repair was not a priority until someone was murdered, cities often have trouble maintaining their systems and there is little accountability when problems are discovered. The end of year reports [link no longer available] will help hold LCSC more accountable for how the cameras are used and maintained. The public is more likely to ask questions about why a camera is not working when they receive regular reports on their status and have paid $1,000 to keep them running.

On the other hand, given the actual results of the system, even if the system can be maintained, what is the real worth of them?