This IPVM integrator survey reveals the favorite biometric of professional integrators, with stats and color commentary.

Almost half of responses listed 'fingerprints' as the preferred biometric, but this answer ranked only slightly higher than 'nothing' at 44%.  This signals skepticism and difficulty working with biometric offerings: 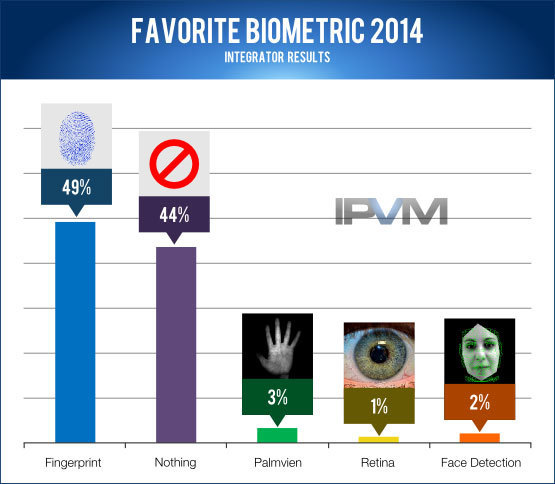 In the sections below we break down the major themes emerging from integrator's comments.

Several integrators shared particular brands or fingerprint reader offerings they have most success with. However, most admitted experience with other reader types and brands are limited, mainly due to lack of demand:

Indeed, almost the same percentage of votes declared 'nothing' as their answer for which biometric they prefer most:

Integrators mainly cited poor previous experience with production biometric use, or weak (in some cases: nonexistent) demand to use them in access designs. Overall, this clearly indicates biometric use somewhere near the fringe of access control designs and not widespread at all.

The remaining total 5% - 6% of votes were divided among three other biometric types: Palmvein, Face Detection, and Retina/Iris scanners. Even when suggesting these methods, however, there were as many anecdotes of failure as success:

Despite marketing claims to the contrary, access control biometric use is fringe at best.

Favorite Products on Aug 01, 2020
Security integrators periodically report on their favorite and worst products...
Favorite Biometrics 2018 on Apr 23, 2018
Biometrics are on the rise, or at least integrator opposition to them is...
Biometrics Pros and Cons For Electronic Access Control on Jun 26, 2017
Biometrics has been long sought as an alternative to the security risks of...
Comments (13) : Members only. Login. or Join.

Favorite Access Control Credentials 2020 on Sep 15, 2020
Credential choice is more debated than ever, with hacking risk for 125kHz and...
HID Presents Signo on Apr 23, 2020
HID Global presented their new Signo readers they claim read farther and...
Spectron IR Thermal Fever Screening System Examined on Apr 14, 2020
Most are quick to avoid "fever screening" and "medical" labels, but...
Favorite Video Surveillance Hard Drive Manufacturer 2020 on Aug 27, 2020
Western Digital and Seagate effectively have a duopoly in hard drives but...
Favorite Network Switches 2020 on Aug 31, 2020
Cisco has long been the gorilla of network switches but would an upstart...
Favorite Access Control Manufacturers 2020 on Sep 28, 2020
200+ Integrators told IPVM "What is your favorite access control management...
Integrator Acquisitions 'A Good Market' During COVID-19, Says Greybeards on Jul 28, 2020
Industry broker Ron Davis of the "Greybeards" says that the integrator and...
Risks Of Managing End User Passwords (Statistics) 2020 on Sep 11, 2020
Alarmingly, most integrators used spreadsheets to manage passwords, IPVM...
Favorite VSaaS Providers 2020 on Apr 17, 2020
VSaaS is starting to become mainstream but who are integrator's...
Worst Camera Manufacturers 2020 on May 06, 2020
Which camera manufacturer have integrators had the worst experience with in...
Facial Recognition: Weak Sales, Anti Regulation, No Favorite, Says Security Integrators on Jul 07, 2020
While facial recognition has gained greater prominence, a new IPVM study of...
Keypads For Access Control Tutorial on Jul 28, 2020
Keypad readers present huge risks to even the best access systems. If...
Bias In Facial Recognition Varies By Country, NIST Report Shows on Jul 15, 2020
While many argue that face recognition is inherently racist, results from one...
K7 Wall Mounted IR Temp Gun Tested on Jun 26, 2020
The original K3 model was missing a number of important features but the...
Ubiquiti Access Control Tested on Oct 21, 2020
Ubiquiti has become one of the most widely used wireless and switch providers...