A Solid Proposal For a City on a Budget

It is far too common to find RFPs and proposals with missing details, inadequate equipment, and out of date specs. Indeed, it is a top industry complaint. While we find a lot of examples of what not to do, recently we came across a good example of an uncommonly thorough proposal. For this note, we spoke with the integrator, Digital Surveillance Solutions (DSS) about a winning bid they put together for a small upstate NY city.

The level of detail is what makes this proposal rare (take a look at the 51-page submission). You sometimes find this in proposals for airports or other multi-million dollar projects, but for smaller projects, both RFPs and proposals are usually lacking. This proposal outlines the integrator's research, includes a number of diagrams showing camera locations and fields of view, bandwidth estimates (see below) and photos of cameras housings to show Saratoga how the cameras would fit in with the aesthetics of downtown. 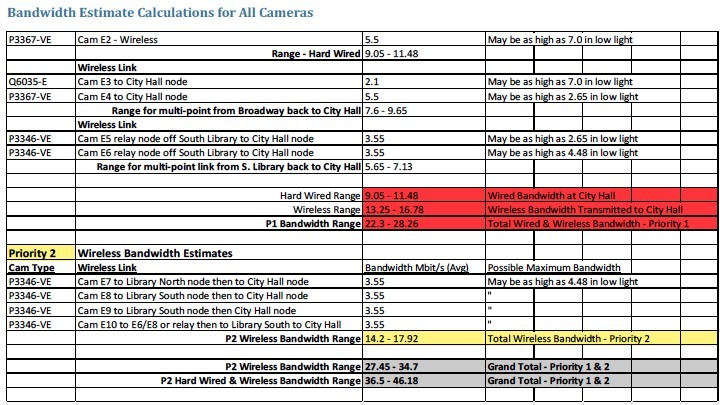 Here is a diagram that shows an overall view of placement for each camera: 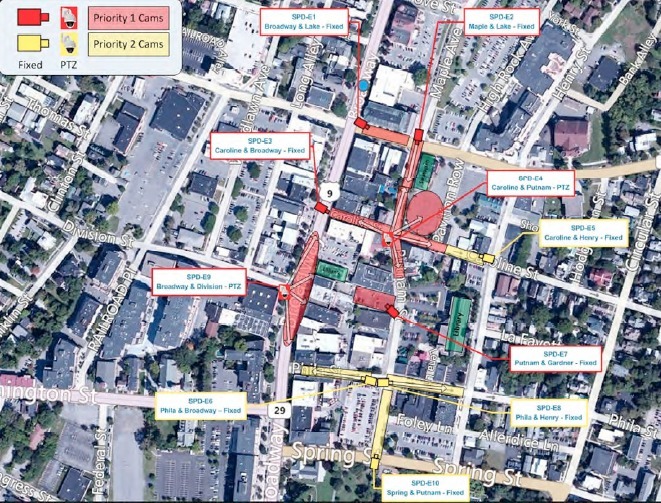 Here's a sample image of what each should look like: 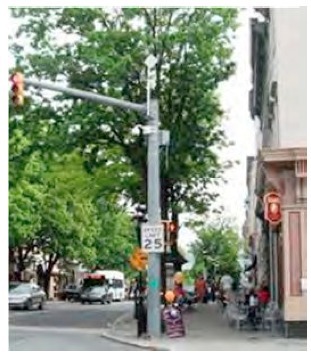 Additionally, the proposal explains in detail how certain parts of the system work to meet the city's goals, provides locations and estimates of where and when most of the work will be done, sets a payment structure, provides procedures for staffing and work changes and identifies additional cost considerations -- for example, National Grid and Verizon fees and costs to power future cameras.

The proposal outlines an optional second phase where four more fixed cameras can be added as the budget allows, leaving providing a starting point for when the city decides to expand. “Hopefully, there will be a phase two and a phase three in subsequent budget cycles,” DSS said.

Every summer, the Saratoga Race Course brings thousands of visitors, enough to give a boost to the city’s economy that lasts through the year. Using grant money, the city wanted to improve surveillance during tourist season and asked several companies, including DSS, to bid on the project. Saratoga had a firm budget ($55,000) and wanted to add 10 more cameras throughout the city.

The city agreed to pay DSS $5,000 to assess the project and product a detailed proposal. “We asked them to prioritize the 10 spots where they wanted the cameras. Then we sent our engineers to the field to do line of sight trajectories and some site engineering,” DSS said.

The build will start within 30 days, the integrator said. Completion is estimated at six weeks, according to the contract -- just in time for horse racing season.

Beyond the proposal being detailed, at ~$10,000 per camera, it is actually a relatively low cost for a city wide wireless surveillance system while using mainstream components (Axis, Exacq, Ubiquiti). Compare to a recent Tyco city system at $17,000 per camera.

On the other end, compare to a project in Hazleton, PA, another small city working on a tight budget. Hazelton had a system built for around $10,000 total. Unfortunately, the integrators for that project took more of a “Yeah we can do it, no problem” approach, failing to account for the city’s architecture and leaving it with an unreliable system and plans for an $85,000 overhaul. In that case, the RFP was simply a bulleted list of items the city wanted. In return they got a proposal which was also pretty much a bulleted list of items and a total price.

The Saratoga City proposal is an example of a detailed and practical statement of work. In contrast to other proposals that are very short with little detail, with questionable design decisions and major expenses, this is an example of a proposal that was good for the customers and a template for others.

On the other hand, many cities prefer or require to have a separate consultant specify the project or simply do not have (or want) to spend funds on an up-front design. Plus, this depends on an integrator not taking advantage of the city, which is a risk if they choose a poor quality or unscrupulous integrator.