Schneider Electric had its contract rescinded and was banned from bidding on projects after the South Jersey Transit Authority Board of Commissioners voted to kill the deal March 19th. In the note, we share our findings from talking to officials and look at why.

The Atlantic City Airport wanted to upgrade its analog system to IP. For “security reasons” the airport won’t say how many cameras they plan to add or release any details about the project.

The Bid Process and Contract

The SJTA has not released detailed bids, however it did release a bid summary showing Schneider's bid was chosen because it was the lowest: 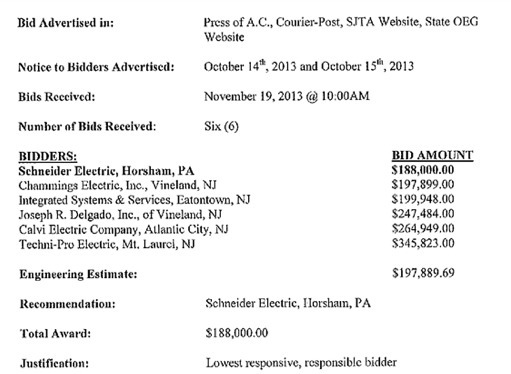 The complete bid specification document has only been released to vendors because it contains “security sensitive information,” an official with knowledge of the project said. However, he did say the sections in question deal with liability insurance.

“We require a certain amount of insurance and liability insurance, and they decided they didn’t want to adhere to our procedures and they tried to do an exception to it. There was some negotiation between our counsel and them and we revoked it,” he said.

The resolution also bans Schneider Electric from bidding on any SJTA projects for two years.

In the same meeting, the contract was re-awarded to Chammings Electric, the second lowest bidder.

Is it a common issue that a company wouldn't have the amount of insurance needed to be part of a project? And why would a company try to change the requirements after winning the bid? Schneider Electric has not responded to emails or calls about the contract, but if you have any insight on how insurance requirements have impacted your decision to bid on a project, let us know in the comments.

Schneider Electric says the local newspaper article about the contract "unfairly portrays the situation" and says the company could not agree on the contract terms and made a choice not to sign the contract it was awarded. It provided this statement by email: